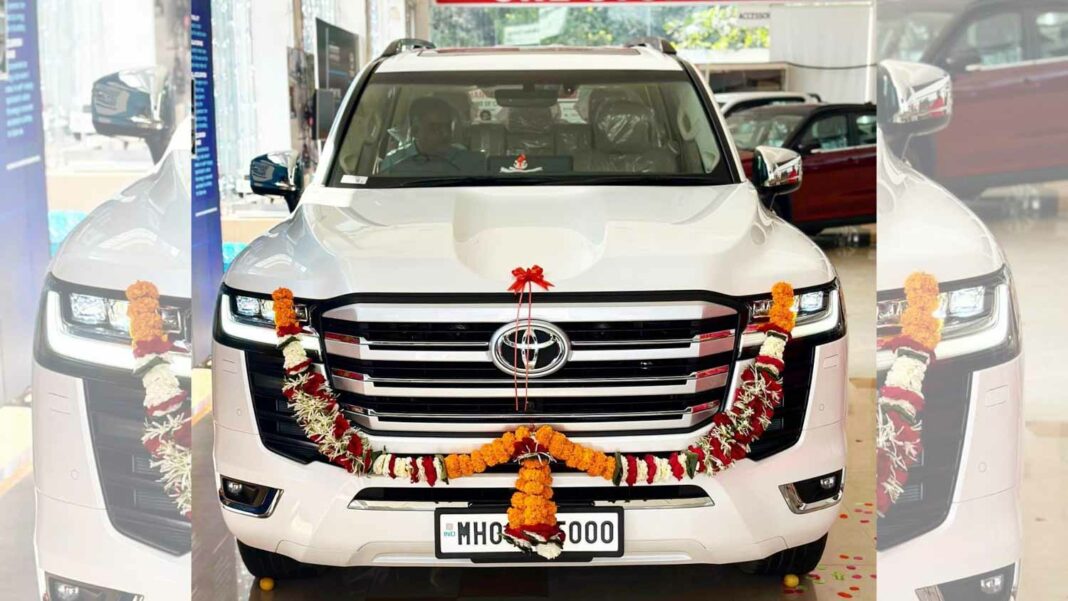 In 2021, Toyota unveiled the new Land Cruiser 300 globally and it was showcased at the 2023 Auto Expo in Greater Noida. The flagship SUV is priced at around Rs. 2.17 crore (ex-showroom) and its bookings are already open in India. The deliveries of the new iteration of the legendary nameplate have commenced domestically and here you see pictures of the LC 300 owned by Pratik Jadhav from Kolhapur.

In India, the new generation Toyota Land Cruiser is available in five exterior colour schemes namely Precious White Pearl, Super White, Dark Red Mica Metallic, Attitude Black and Dark Blue Mica. The images you see here are of the Precious White Pearl, which will be a preferable choice for many buyers considering Indians’ affinity towards the white shade.

The Toyota LC 300 is sold in two powertrain options in foreign markets. A 3.5-litre twin turbo V6 petrol and a 3.3-litre V6 turbo diesel engine do the propelling duties. The gasoline mill develops a maximum power output of 415 PS and 650 Nm of peak torque while the oil burner kicks out 309 PS peak power and 700 Nm of torque.

The India-spec version is offered only with the diesel engine and is linked with a ten-speed automatic transmission, sending power to all four wheels as standard. Toyota sells the new-gen Land Cruiser with a standard warranty of three years or one lakh km (whichever comes first). It sits on the modular TNGA-F platform with an updated construction.

Compared to the old model, the LC 300’s kerb weight has been reduced by 200 kg while the weight distribution has been improved with better suspension technology. Courtesy of the improved wheel articulation and the Electronic Kinetic Dynamic Suspension System, the off-roading characteristics and the handling abilities have been improved drastically.

The Toyota Land Cruiser 300 sits 230 mm above the ground and is loaded with features such as LED headlamps, a 12.3-inch touchscreen infotainment system with Apple CarPlay and Android Auto connectivity, and a lot more.