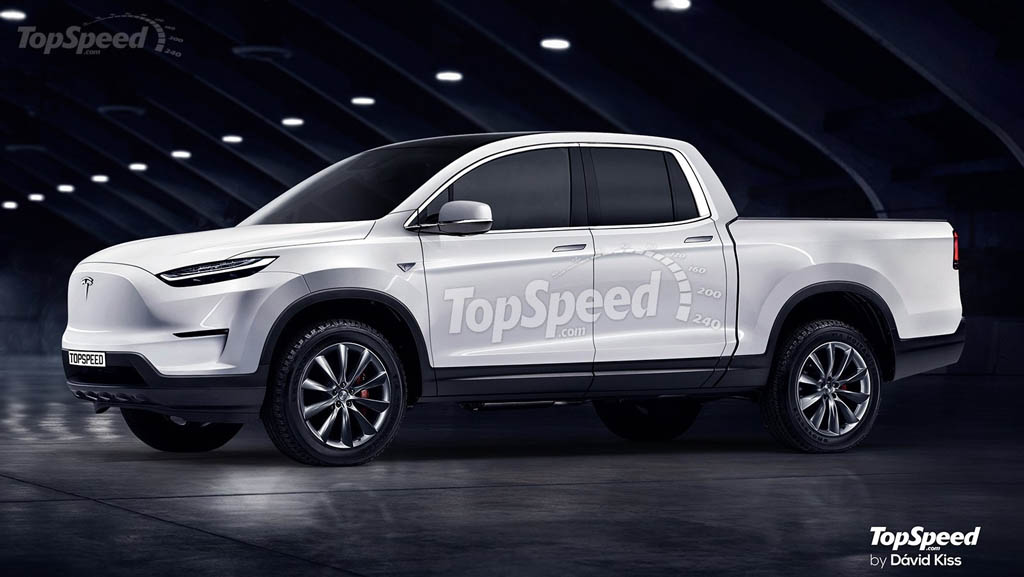 Tesla planning an electric offensive, which will see an electric pickup in near future, as the American EV maker claims. Elon Musk, the boss of the company has already cleared his ambition to make a pickup under the badge of Tesla. Interestingly, this will be world’s first electric pickup. While few days ago we have seen a speculative rendering of the vehicle, now TopSpeed has published a new rendering.

The previous rendering was done comparing the vehicles with the Ford F150 Raptor. It was very aggressive indeed. The new rendering on the other hand comes very logical and practical. It is still not clear, on which Tesla model the pickup will be based on though. But the new rendering suggests it would get a similar fascia like the Model 3.

In the rendering there is no front grille. The headlamps come very sleek and with integrated LED daytime running lights. The lower fascia looks a bit rugged though. It might get a skid plate, as we saw in the previous rendering. The side profile of the vehicle gets flared wheel arches, sharp character lines, and aggressive alloy wheels. The red brake calipers are visible as well.

The cabin comes sporting four doors, therefore two row seating arrangements inside. The glass area gets blackened appearance with chrome trim around it. The ORVMs get side turning indicators integrated to them. Expect LED taillamps at the rear profile. The rendering doesn’t give out any information about the cargo hold. But, as Elon Musk wants to make it competitive, therefore expect the Tesla pickup to offer plenty of space. The electric powertrain is certainly the main USP of the world’s first electric pickup. Expect the car to come with massive torque amount at zero rpm. Therefore the vehicle will be able to do some tough tasks thrown at it. Apart from the pickup Tesla boss also hinted about a minibus as well.