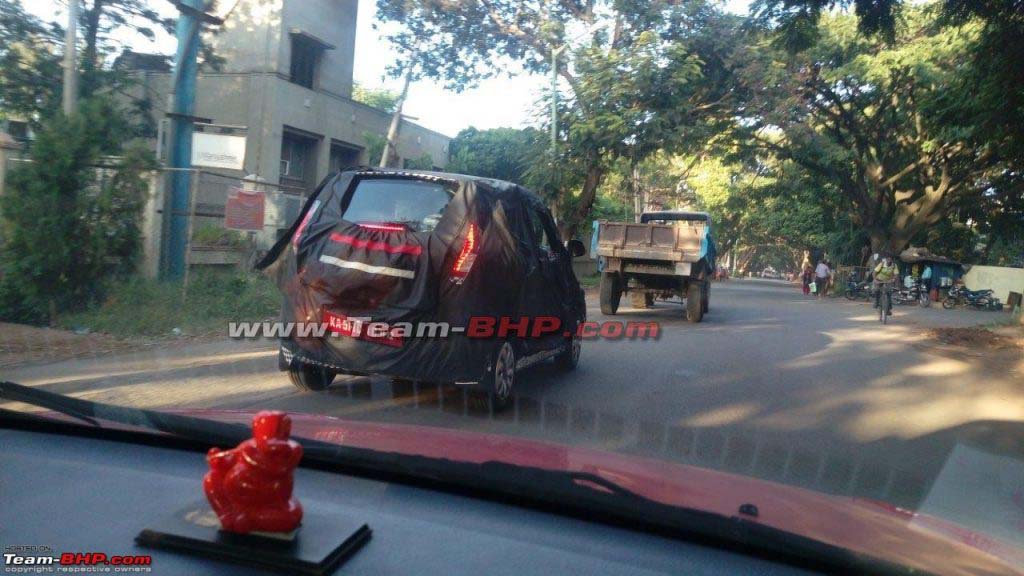 Mahindra & Mahindra seems to be taking the electric vehicle projects pretty seriously. After the two door Mahindra e2o hatchback and the Mahindra e-Verito sedan, the company is now working on its third all electric vehicle, which is a SUV and codenamed as the S107. Meanwhile a test mule of the four door version of the e20 hatchback has been spied testing near Mahindra Reva’s facility in Bommasandra, Bangalore.

Though the test mule was heavily camouflaged, the hints of the rear passenger doors are very clear. The car clearly comes longer than the outgoing model, therefore expect it to don some exterior changes and also the interior might don some updates as well. Compared to the outgoing Mahindra e2o, the design of the upcoming car would be sharper and more stylish as well. The outgoing model is available with two passenger doors, and despite being such a small car, it is very much practical and fully environment friendly. Expect the Mahindra e2o to come sporting the power steering, music system, electric ORVMs, reverse parking camera like the outgoing model, and it might some more features as well. The digital instrument cluster and the AC operation from smartphone feature would also make their way into the upcoming model.

Dimensionally, the model measures around 3,280 mm in length, 1,514 mm in width, 1,56 mm in height, while the wheelbase is at around 1,958 mm. Power source for the car is an electric motor powered by a 48V lithium ion battery, and the motor kicks out 19 kW power at 3,750 rpm and 53.9 Nm of peak torque developed between 0 – 3,400 rpm. It comes equipped with a fully automatic transmission, and it can run up to 120 kilometers with a fully charged battery. Top speed for the car is 81 kmph, and the e2o take 5 hours to get fully charged through a 220V 15 A socket. The four door Mahindra e2o is expected to launch sometime later this year or in next year, and the automaker also indicates, that it will be sold in overseas markets.