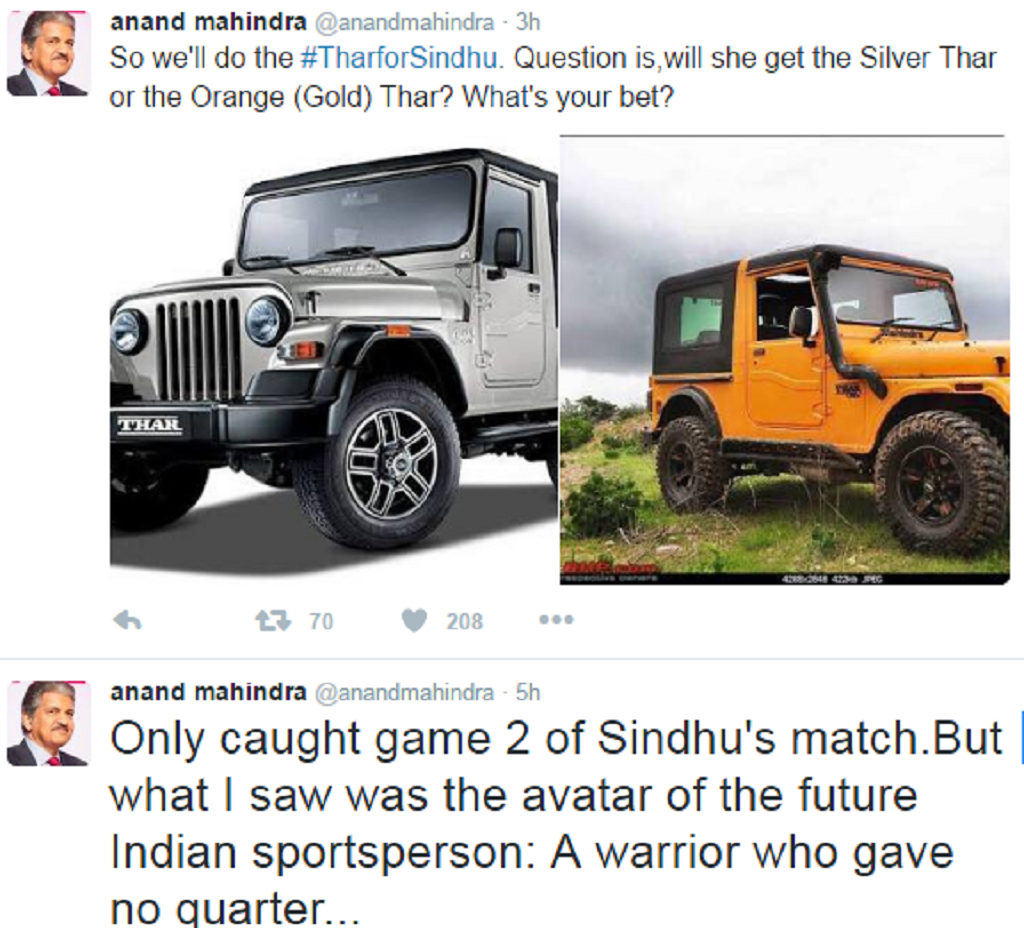 Anand Mahindra announces Thar for PV Sindhu; Gold or Silver colour as per the shuttler’s Olympic accomplishment said the man in charge

The Indian contingent went into the Rio Olympics 2016 with so much anticipation as there were several promising contenders to stand on the podium. With a billion hearts eagerly turning up to watch the events unfold and crossing fingers for the athletes to emulate shooter Abhinav Bindra’s golden triumph in 2008, the finest women competitors the country has at its disposal proved their immaculate precision and brilliance once again in the biggest stage of them all.

Just like Karnam Malleswari, who took the lonely bronze for India in the 2000 Sydney Olympics in the 69 kg weightlifting category, Sakshi Malik mended the sinking hopes by standing on the bottom step of the podium in 58 kg Freestyle Wrestling division. To commemorate her achievement, Anand Mahindra sought for support with #TharForSakshi hashtag on Twitter and gathered overwhelming reception. He said the gifted Thar will be customised based on her preference. However, Indian fans were bitterly disappointed by the injured sustained for the former Badminton world number one, Saina Nehwal. The 26-year-old golden girl shockingly exited the competition in group stage due to the right knee inflammation which hampered her on-court movement.

As Saina had to let her dream pass, PV Sindhu soldiered on and is on the cusp of becoming the first Indian women to win gold at the Olympics. She thrashed her formidable opponents with plethora of smashes, drops and tosses. The Chairman and Managing Director of the largest manufacturer of SUVs in the country, Anand Mahindra, has lauded the valiant shuttler’s performance in the semi finals against Japanese player Nozomi Okuhara and tweeted: “Only caught game 2 of Sindhu’s match.But what I saw was the avatar of the future Indian sportsperson: A warrior who gave no quarter.”

Also Read: Anand Mahindra Adds Another Mahindra in his collection, this time TUV300 The 21-year-old Padma Shri, PV Sindhu, will be gunning for gold today as all of us will be watching and obviously praying for her at the edge of our seats. Whether winning or losing, her name will be etched in the Indian sporting history books for good. She has already been announced with a Thar from M&M but the colour she would get depends on claiming gold or silver. Let’s hope she would drive away with the Golden Thar!