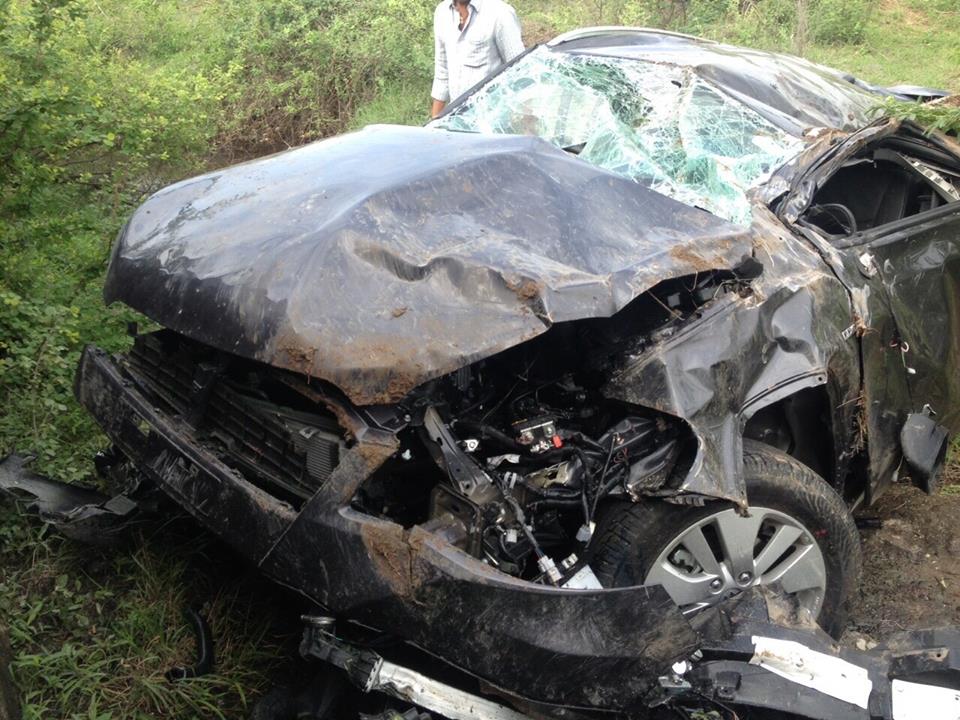 [Update] – As per our Sources, the Accident happened with Atul Motors Jamnagar (Gujarat) Dealership’s Display Car that has fallen from narrow bridge and the showroom driver Prateek on the co-driver seat passed away, sales executive who was driving the car is in critical condition.

What the hell is happening! The most hyped about cars are crashing one after the other. Sometime before it was the Creta that met with accident which saw angry villagers tumbled it and destroyed it. This time around it clearly visible that the car has either went below a truck or tumbled multiple times before it has come to the position. The car has seen some serve damaged at the front, on the roof and force of the impact has gone all the way to the rear also. Maruti Suzuki S-Cross Crashed from a likely front end collision here and has rolled about multiple times and then ended up in a ditch. Where do these photos come from, no idea! Which state, town or city we have no details of that as of now. What we can see in these that crash is pretty damn brutal, the cabin of the car has been also penetrated and airbags are also not visible.

The Maruti Suzuki S-Cross Crashed could be a test drive vehicle from a dealer end and potential buyers could be in the car or simply it could be going from showroom to stockyard. In terms of safety this time around, Maruti has provided airbags and abs as standard on most variants but it still misses ESP which the European version gets. What surprises us that the sheet metal damage is not much this time around like it has been with Maruti cars before. The collision may be big, but the sheet metal has crumbled and not broken into piece like yesteryear of Maruti cars. It just’s very badly mangled car and we hope the occupants of the car is save. Overall, the car is pretty messed up and news of car being crashed before launch makes a wrong impression on our buyers who believe in false rumors rather than the truth spoken by showroom salesman. We strongly believe in the fact that sometimes things seen with our eyes does not speak truth. Let’s wait for more details on this from sources or the manufacturer itself.