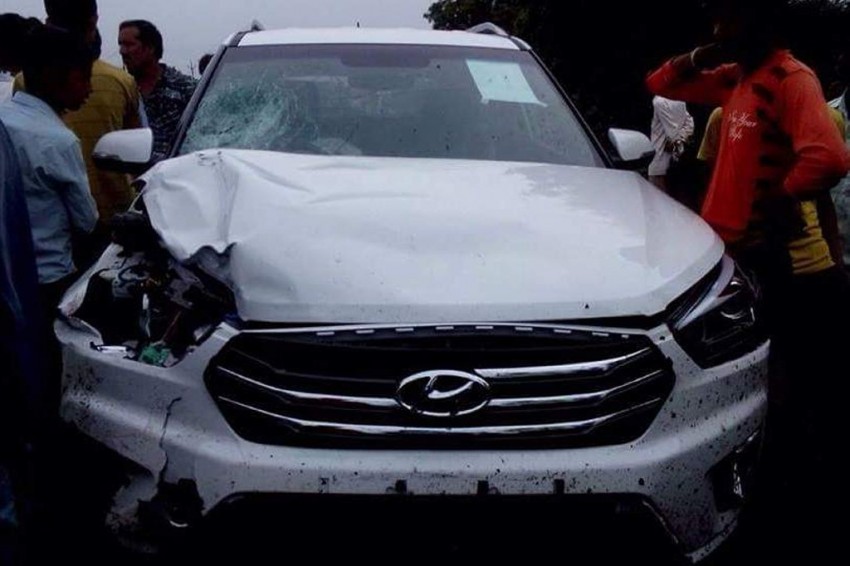 In what seems to be absolutely shocking, The recently launched Hyundai Creta which was the most hyped vehicles in the country from Hyundai till date, as reported not one but two crashes in one day. Reports emerge from Facebook users who have posted these pics on their accounts. People asking Hyundai for answer for how this happened but as we know this could be just driver error and vehicles tested for lakhs and lakhs of kilometers don’t go down on day two post launch.

The car seems to be unregistered and could be on the way to showroom from stockyard. One vehicle seems to be damaged from the front which is not that substantial enough. However, the second image of the Creta flipped over has also surfaced on the social media.

We think the second image of the flipped car COULD be the same car that crashed before. If both accidents happened on same day in two locations then it raises a lot of eyebrows and a large amount of suspicion as it needs to concrete answer.

We hope the occupants must have escaped these crashes and are fine. The flipped over car is the SX (o) variant which comes six airbags and it is the car which is equipped with 1.6 diesel engine. More details should follow from authorities of the locality and may be Hyundai India as well. Stay tuned as we follow the news and keep you updated on it

Update – Hyundai has communicated with us saying that this incident is a road rage and not a crash, between a local bike rider and angry villagers who flipped the car and there has been only one such incident.