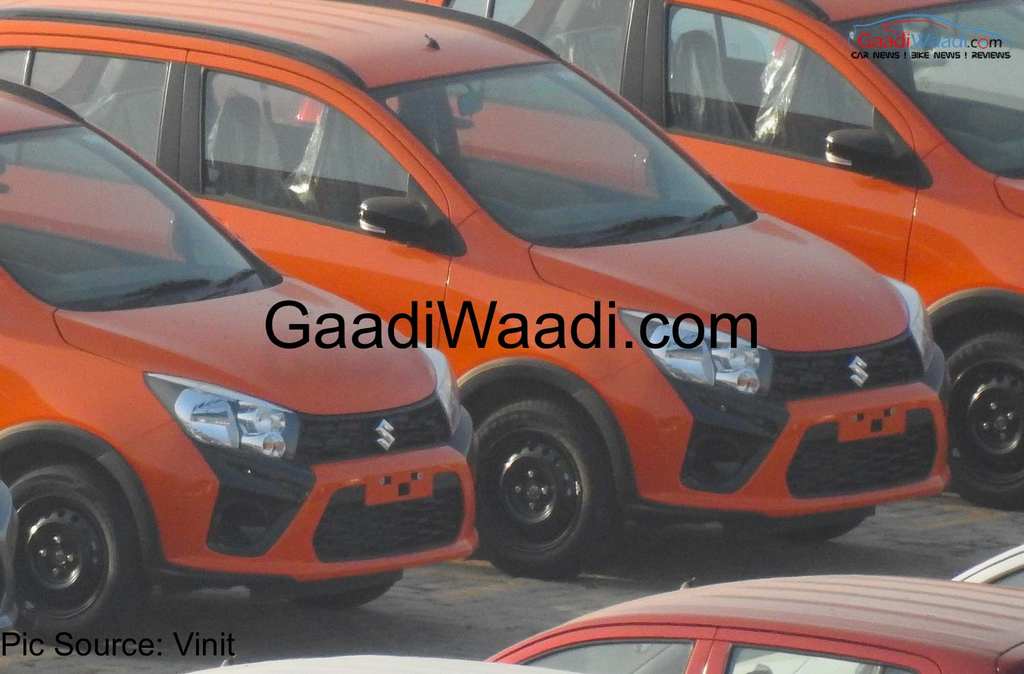 Maruti Suzuki Celerio Cross based on the well-received small Celerio hatchback hit the floor at the Auto Expo 2016 in Greater Noida and it also made its European debut the same year in Geneva as Celerio X with more cosmetic changes. The hatchback-derived crossover segment has gained popularity in recent times with Hyundai i20 Active, Volkswagen Cross Polo and Toyota Etios Cross have warmly been accepted by the burgeoning band of Indian buyers who seek a practical hatchback with added space but the Celerio X is positioned well below them.

At the 13th edition of the Indian Auto Expo, it was one of the three cross concepts showcased as the other two were Chevrolet Beat Activ and Tata Zica (now Tiago) Aktiv. Maruti Suzuki Celerio X could spark a genuine threat as it springs up a new affordable segment in the crossover space. The Celerio has been recognised for catering an affordable automatic transmission to the first-time buyer’s segment and it will follow a similar strategy with the Celerio X. It targets “young, progressive and aspirational buyers.” 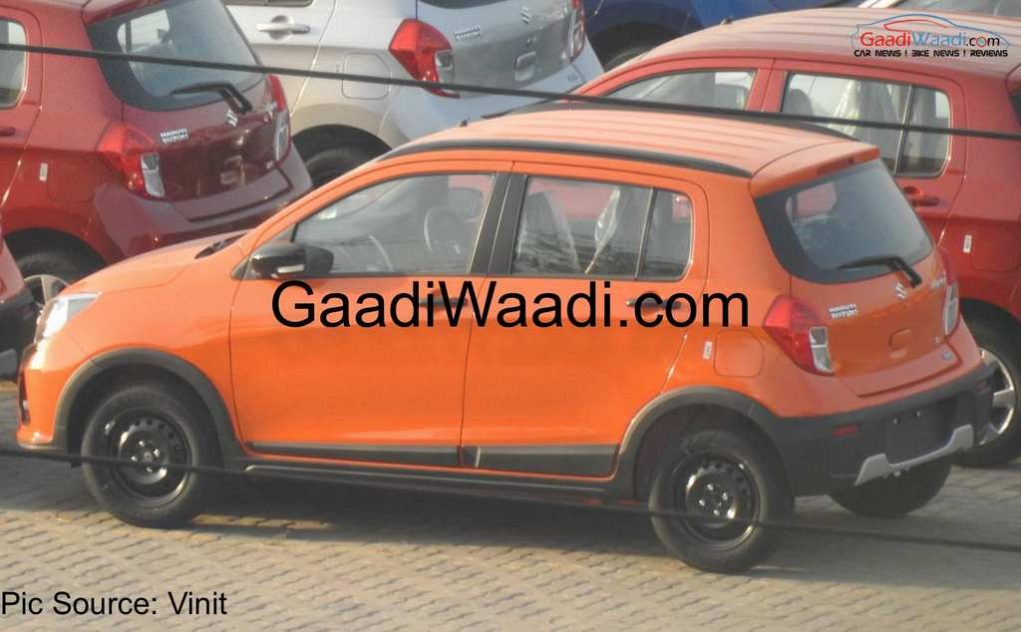 With the probability of Tiago Aktiv and Ford Figo Cross arriving at a later time is high, the Celerio X will now have to make do with the rivalry from Mahindra KUV100 and possibly Renault Kwid and standard Tata Tiago. Its looks are inspired to rival against the Kwid Climber variant. Here is everything you need to know about the Maruti Suzuki Celerio X:

The Celerio X was spied by us completely for the first time in a dealer yard a few weeks ago. The new cross hatch from India’s leading car manufacturer has been launched now in India at prices between Rs. 4.57 lakh and Rs. 5.42 lakh (ex-showroom, Delhi). Bookings have already begun at authorised showrooms across the country. 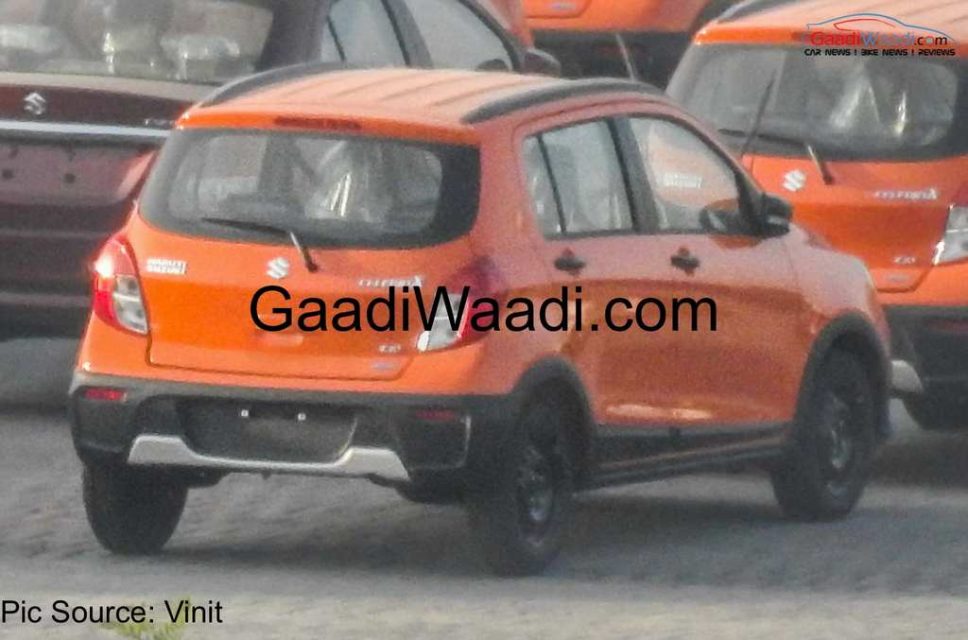 Currently, the hatchback version of the Celerio is priced between Rs. 4.03 lakh and Rs. 5.24 lakh (ex-showroom, Delhi).  The Celerio X, however, demands an additional price of around Rs. 57,000 for the base Vxi MT version.

It goes all the way up to Rs. 5.42 lakh for the range-topping Zxi (O) AMT variant ((ex-showroom, Delhi). With the Celerio X, Maruti Suzuki is confident of big boost in sales as the standard Celerio has sold over 300,000 units in the domestic market thus far. 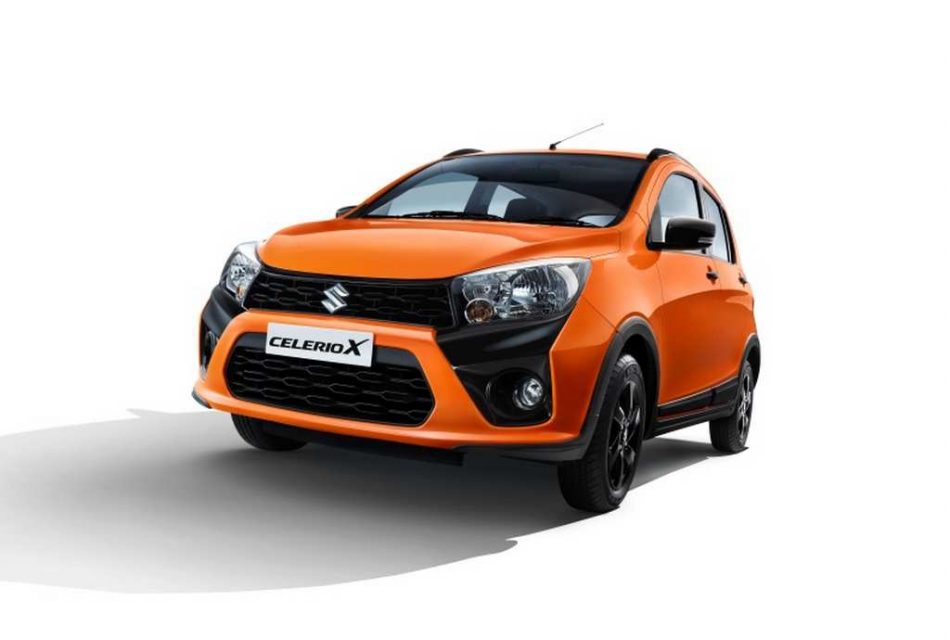 The powertrain line-up remains identical as the Celerio hatchback with a 998 cc petrol motor develops 67 bhp of maximum power output at 6,000 rpm and 90 Nm of peak torque at 3,500 rpm. The engine will be mated to a five-speed manual as standard while customers can opt for a five-speed AMT as well.

While the width of the Celerio X will be as similar to the standard hatchback, expect minor changes in other proportions. An added advantage will likely be increased cabin space and more boot capacity. 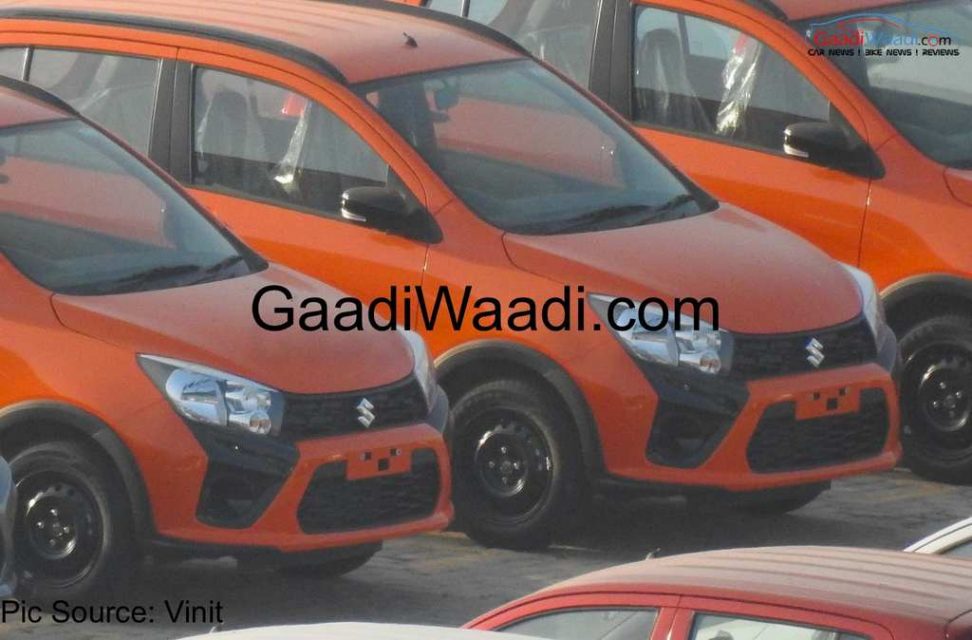 We predict the Maruti Celerio X version to have increased ground clearance of around 15-20 mm. Therefore, it will likely be rated at 180 mm.

Changes in trunk capacity may result in it being measured at 270 litres as opposed to the regular hatchback’s 235 litres. 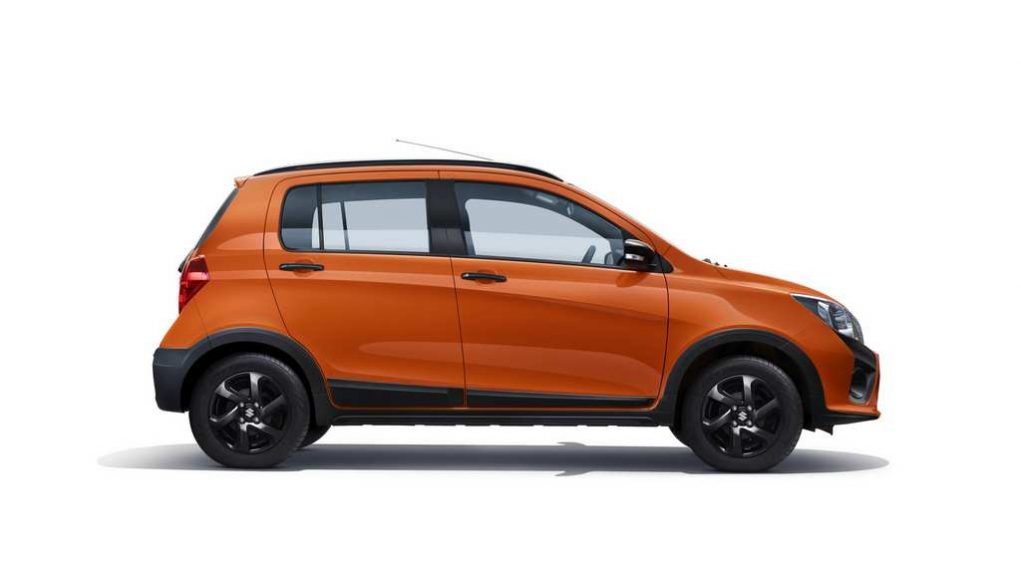 We can safely assume that the fuel economy of the Celerio X will be in and around 23 kmpl for both manual and AMT versions of the petrol engine.

The CelerioX sports aerodynamic design with a newly designed X-theme based graphic around the grille. Other notable features are protective cladding on sides and rear bumper as well as skid plate details on rear, high gloss black accentuation on like grille, fog garnish, clads, roof garnish, blacked out B-pillar and interior accents. 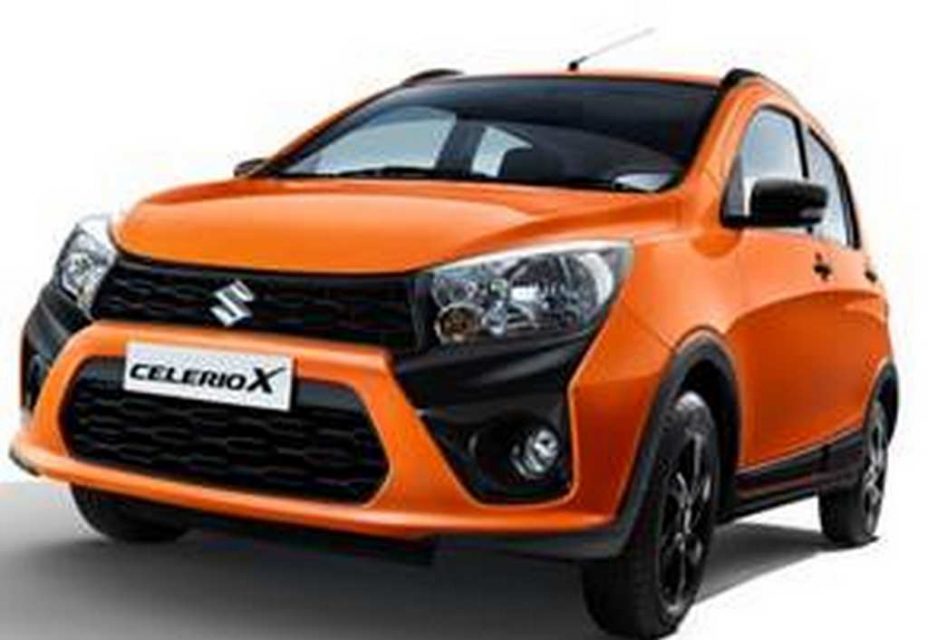 It will offer driver airbag and co-passenger airbag as standard along with ABS (Anti-lock Braking System) and EBD (Electronic Brake-force Distribution). The black alloy wheels have dual six spokes while the black body kit, side body mouldings, roof rails, plastic rear underbody protection and wheel arch extensions to elevate the overall appeal of the model. CelerioX comes with all-new Paprika Orange signature colour which is claimed to reminisce the youthful energy and symbolizes sportiness. It is married with matte and glossy black to help define the character lines. 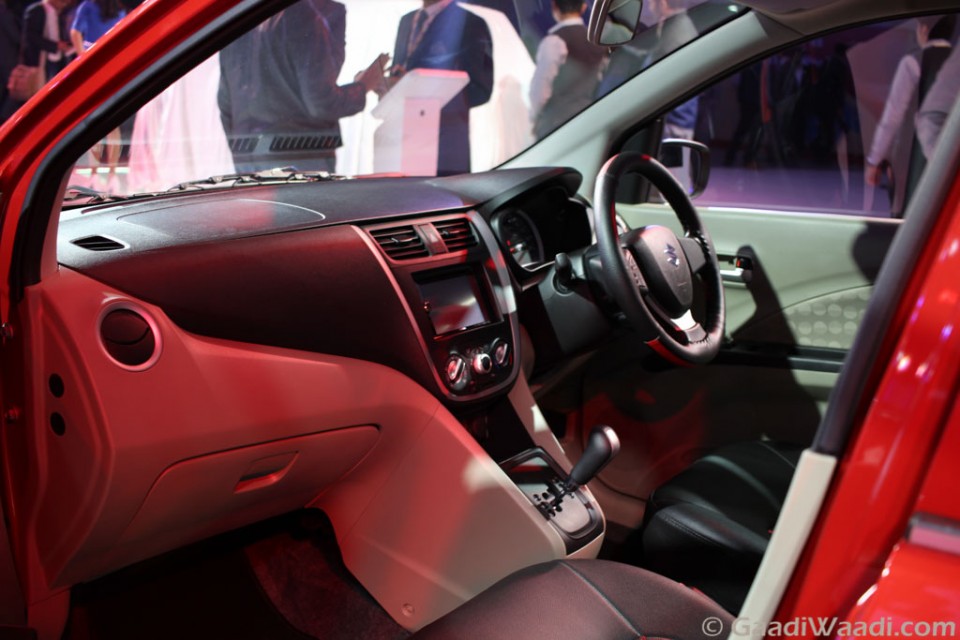 The interiors has an all-black colour scheme with contrast stitching on the seats and steering wheel. To differentiate the crossover from the hatchback, the inevitable mechanical modification made is a raised suspension for more ground clearance. The black seat trims are spiced with Orange accents to elevate the sporty character of the vehicle.

The new crossover version of the Celerio hatchback will compete mainly against the KUV100 while it will also seek the market share of Datsun Go Cross as well. Since the Celerio X will be positioned lower than the Hyundai i20 Active, Toyota Etios Cross and VW Polo Cross, it could create a niche of its own when it goes on sale. It will see competition from Tata Tiago Aktiv and the Ford Figo Cross in the future as Chevy Beat Cross won’t make the cut.