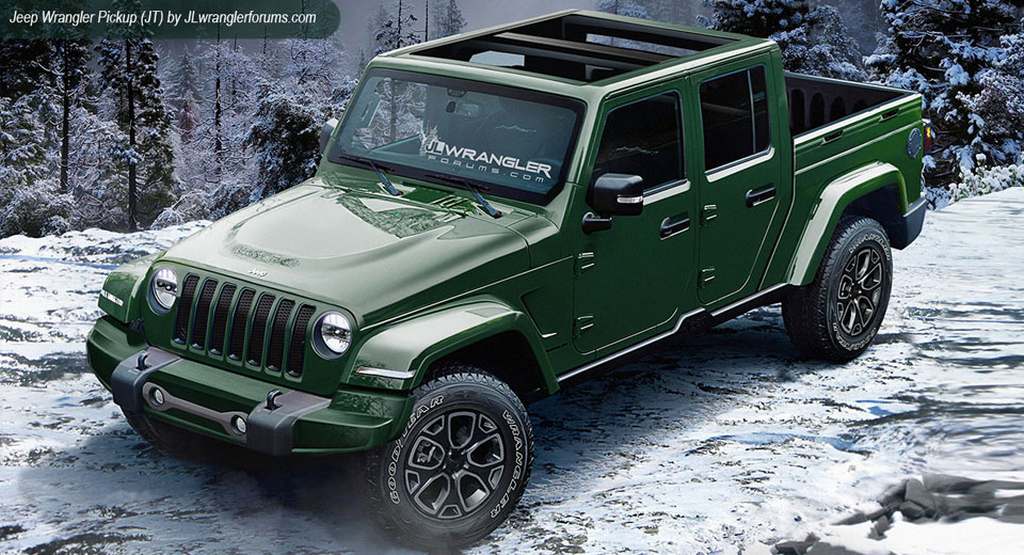 2018 Jeep Wrangler will have restyled exterior and is set to spawn a four-door pickup truck version; production to commence from November

The all-new generation of the 2018 Jeep Wrangler has been long awaited and thankfully it is coming after wide array of speculation. Production of the existing Cherokee is expected to end by April in Toledo to make way for the body-on-frame new-gen Wrangler. The plant will be shut down for about six months for tooling replacement and assembly line adaptation.

When it makes world premiere as a brand new model, there are numerous changes it will incorporate like a range of new engine options and most importantly new design as rumoured. Some of the readers who are following the arrival of new Wrangler might wonder where can a render come from. Well, depending on the recent spy shots of the off-roading model not revealing its true identity as a test mule have paved the way for people at JL Wrangler Forums to produce digitally rendered version of the upcoming Wrangler. We can tell you one thing! If the production vehicle looks half as good as this, we are counting days eagerly until it arrives. Mind you, the new Wrangler may appear like this observing from the insider notes and prototypes of late according to reports. The signature rugged styling is unsurprisingly carried forward as the design of the new Wrangler sticks in line with the existing model.

Some of the prominent modifications expected to be features are a redesigned seven-slat grille, a more raked windshield, beefed up bodywork, long bonnet structure, flared wheel arches, off-roading specific tyres, round-ish headlamps, aggressive front and rear bumpers, accessories to spruce up the off-roading hunger and so on. It is believed that the styling revisions will be made in order to improve the aerodynamic efficiency of the new Wrangler and in turn its fuel economy and handling. The other significant changes could come courtesy of newer headlamp cluster and side markers. Additionally, a new three-piece roof design with removable panels accentuates the styling factor.

The next generation Wrangler will spawn a four-door pickup truck variant as well. The engine options will include a new Pentastar V6 and a 3.0-litre four-cylinder turbo diesel among others. The transmission duties will be done by an eight-speed automatic gearbox. We can expect the new Wrangler for domestic market at around late 2018 or early 2019. The success of Compass compact SUV will play a decisive factor in its arrival.