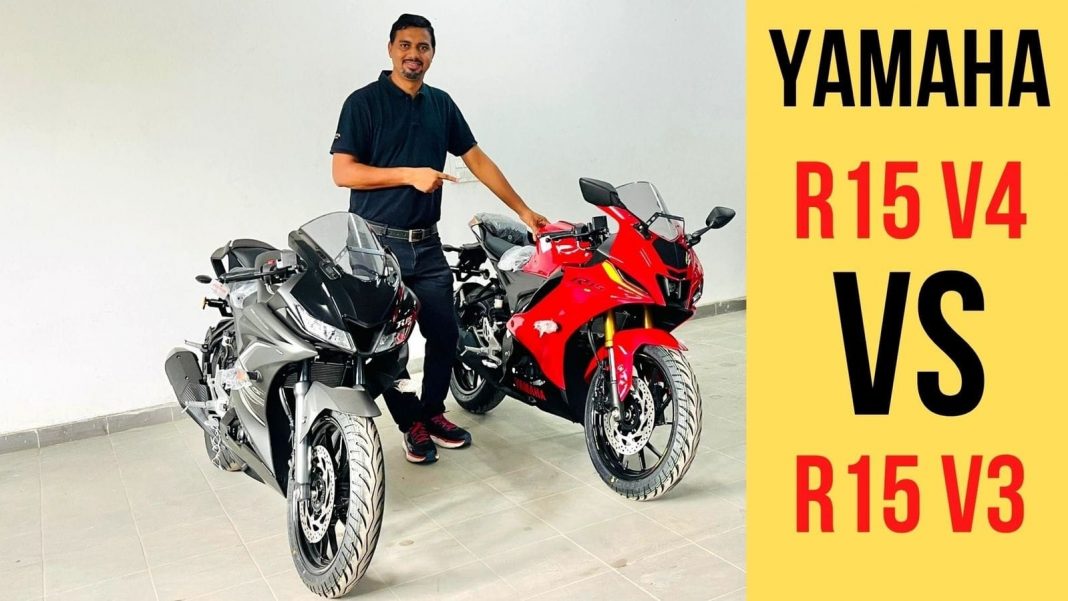 Yamaha recently launched the R15 v4.0 in the Indian market, and here, we compare it with its previous-gen model, the R15 v3.0

Yamaha launched the new-generation YZF-R15 in India just a few days ago, and the new model has already generated a lot of hype in the market. Dubbed ‘version 4.0’, the new R15 sports a lot of changes over the older-gen model, in terms of design, equipment, etc. There are a few similarities as well, as the best bits of the version 3.0 have been carried over.

If you’re curious about all the changes on the new Yamaha YZF-R15 v4.0 over the R15 v3.0, then just keep reading ahead!

The new version has a beautiful, Yamaha R7-inspired design. At the front of the motorcycle, we see a single LED projector headlamp, with sleek LED DRLs at the sides. The front fairing has been redesigned as well, but the tail section remains largely unchanged.

The bike continues to get a split-seat setup, and there are integrated air ducts on the tail. The ‘M’ version (R15M) gets a different exhaust design, which looks sportier than the regular model. The riding ergonomics, however, remain as committed as before, with low-set clip-on handlebars and rear-set footpegs.

The R15 v3.0 was already a handsome machine though. It had twin LED headlights with a faux air duct on the nose. The fairing looked brilliant, and the tail was sharp with the same winglet-type design that continues to be offered on v4.0.

The bent-forward riding position of the R15 makes it a brilliant tool for track riding, but city commuting and long-distance touring can be tiring if you aren’t used to it. Thankfully, the seat is relatively low and narrow at the front, allowing even shorter riders to keep their feet firmly on the ground.

The new-gen R15 comes loaded with a lot more features than before. The suspension system has been upgraded with a pair of golden-finished USD forks at the front, while at the rear, the bike continues to get a link-type monocross suspension. Other features added to the R15 v4 include traction control and quickshifter.

As for the previous-gen R15, it wasn’t too bad on the equipment front either. It got LED headlights and taillight, a fully-digital LCD instrument cluster (with gearshift indicator), and a sharp design. It didn’t get smartphone connectivity options, but the instrument console was easy to read.

Although the engine is the same 155cc, liquid-cooled, single-cylinder unit (with Variable Valve Actuation) as before, it has been tuned a little differently on the v4. This motor generates a peak power of 18.4 PS and a maximum torque of 14.2 Nm, and comes mated to a 6-speed transmission. Slipper & assist clutch is offered here, along with a quickshifter.

The R15 v3 was slightly more powerful, at 18.6 PS, although it had marginally less torque, at 14.1 Nm. The transmission was the same 6-speed unit, and a slip & assist clutch was offered as well. Thanks to the VVA, the power was spread evenly across the rev-range.

The price of the Yamaha R15 v4 starts at Rs. 1.67 lakh, and goes all the way up to Rs. 1.79 lakh for the M Moto GP Edition. It is significantly more expensive than the previous-gen model, which was priced from Rs. 1.57 lakh to Rs. 1.59 lakh. Considering all the additional equipment offered on the new model, we say the added price is more than justified.