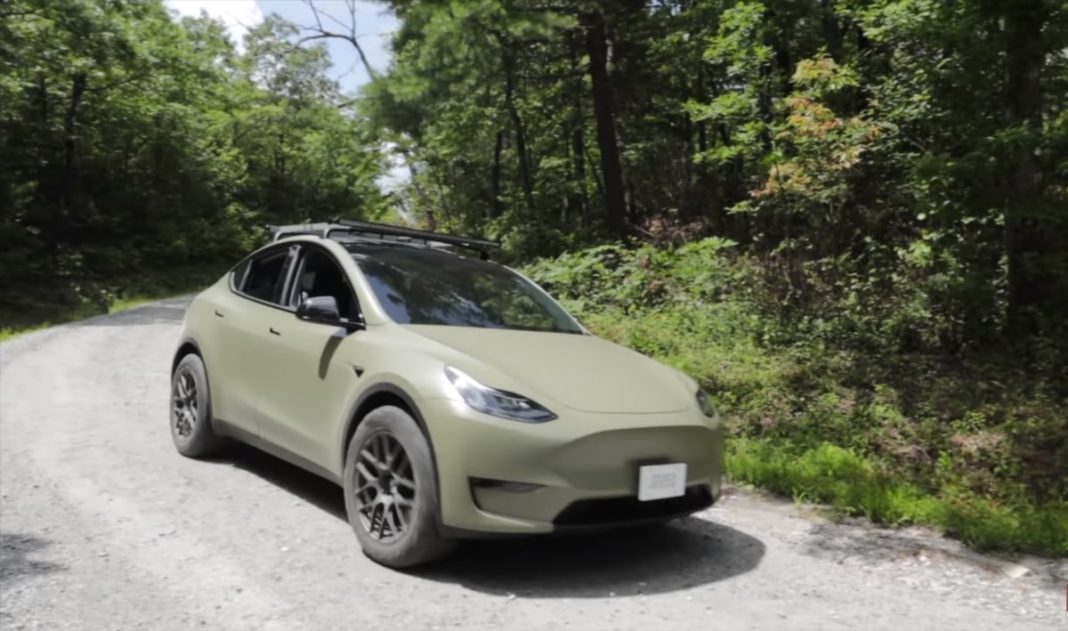 Here, we have a video of the first-ever off-road-ready customised Tesla Model Y, showing off its overlanding capabilities in the mountains of North Carolina

What would you do if you had an SUV worth at least $50,000 (roughly Rs. 37.5 lakh)? If your answer is “modify it into an off-road monster”, then you’re not alone! We’ve recently come across a YouTube channel called i1Tesla, run by a man called Brian Jenkins, who has customised his Tesla Model 3 into a serious terrain-muncher.

This particular car is perhaps the first Model Y in the entire world to be modified into an off-roader. Brian, the owner, has added a 4-inch lift kit to the car, along with 19-inch wheels shod with 31-inch Toyo tyres, to improve the car’s off-road performance. Other than that, the car also gets a custom roof rack, with an LED light bar mounted on it.

To protect the bodywork, this modified Tesla also sports a full-body vinyl wrap by Avery. It has a unique shade of dark, dirty green, which looks right at home in the wild. The roof, however, is blacked-out, which gives this car a dual-tone look for the exterior.  A towing hook has been added to the rear bumper, to allow the car to be rescued if it gets stuck.

As stated in the video, the mod job isn’t complete yet, with a host of auxiliary lights left to be added. Also, this modified Tesla isn’t built to be a heavy-duty off-road vehicle, rather a relatively docile overlanding SUV. Instead of climbing rocks and braving through treacherous terrains, this car is designed to be a tool for exploring the wilderness.

We also get to see this Model Y undertake an adventurous ride up a mountain, negotiating dirt roads, steep slopes, and sometimes even broken patches of land. During a particularly tricky section, the driver turned on the off-road assist, which stops the tyres from spinning on dirt and gravel, thereby maintaining traction. 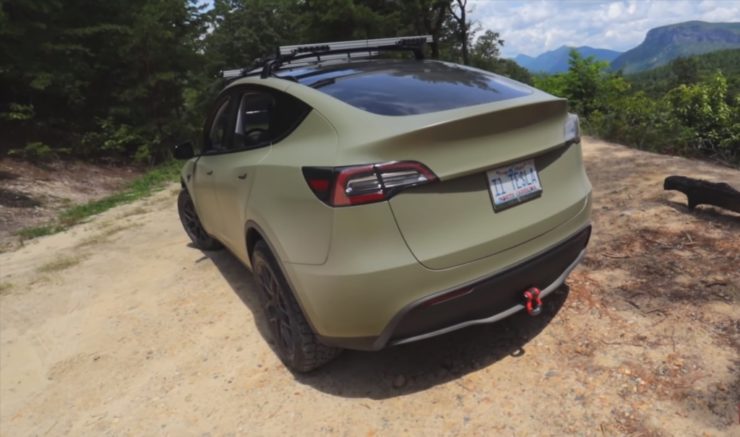 No changes have been made to the powertrain of the car; it’s still powered by two electric motors, one at each axle, capable of generating a total of 384 hp in the ‘Long Range’ trim and 456 hp in the ‘Performance’ trim. The Tesla Model Y is a coupe-styled crossover SUV, available in 5- and 7-seater configurations, which makes it an extremely stylish yet practical family car.