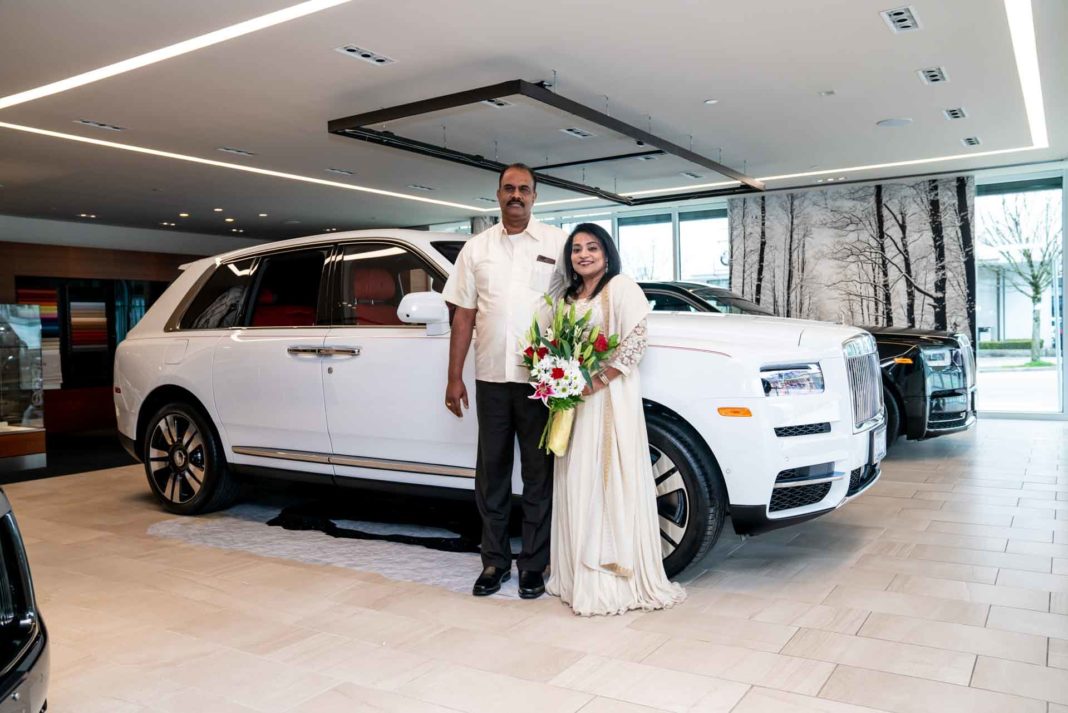 Family is all about being there for one another and at times, even the smallest of gifts having emotional factor can make a big difference in a relationship. Here, it is the polar opposite, as a wealthy businessman named Reji Philip presented his wife, Anie Philip, a gift only a few could imagine having in their lifetimes.

On their 25th wedding anniversary, Reji Philip surprised her wife with an astounding 2020 Rolls-Royce Cullinan and in this video, you could see the pair taking delivery of the uber-luxurious SUV in Canada. As you can expect, she was taken aback and the video shows her emotions in entirety as she steps into the Rolls-Royce showroom to unwrap her gorgeous Cullinan.

Mrs. Philip has become the first Indian women to own the bespoke 2020 Rolls-Royce Cullinan in the whole of North American courtesy of her husband and the second Malayali to do so across the world. Mr. Philip went as far as customising the 2020 Rolls Royce Cullinan with an exclusive number plate engraved with her name and fittingly the white body paint was simply mouth-watering when it was taken to the streets gracing the roads.

The Cullinan is engineered to perfection with good off-roading capabilities without hampering the signature comfort Rolls-Royce models are known for. It is named after the largest diamond ever discovered by mankind and it has been the second vehicle ever to sit on the new aluminium architecture developed for the British brand.

The Cullinan has several commonalities with the Phantom but the differences are certainly obvious in a character and the way it is being pitched to customers. The Cullinan derives power from a 6.75-litre twin-turbo V12 engine, which develops 571 PS maximum power and 850 Nm of peak torque. It has a top speed of 250 kmph.

The power is sent to all the four wheels through an all-wheel-drive system. It has bigger proportions than its closest rival Bentley Bentayga. Some of the highlighting features in the Cullinan are bespoke ‘Everywhere’ button, two-section “clasp” tailgate, suicide rear doors, and a whole host of comfort, convenience, safety and off-road based features.