It is no secret that Maruti Suzuki and Toyota are working together to enter the highly lucrative and competitive midsize SUV segment in India. The co-developed five-seater will be unveiled by Toyota on July 1, 2022 and it will carry the Urban Cruiser Hyryder name while the Maruti Suzuki’s iteration will more likely be known as the Vitara.

Internally codenamed D22, Toyota’s midsize SUV could be based on the DNGA platform while Maruti Suzuki’s version, as we reported, would likely be underpinned by the Global C architecture that can be found in the latest global Vitara and the Brezza sold in India. Before the arrival of the Vitara, Maruti Suzuki will introduce the 2022 Brezza on June 30, 2022.

The Vitara Brezza compact SUV has dropped the Vitara prefix, suggesting that it could be used for the forthcoming midsize SUV. The Global C architecture is also used in the S-Cross in India and Maruti Suzuki could target five stars in the Global NCAP crash tests with the Vitara considering that the existing Vitara Brezza is already high on safety with a four-star rating. 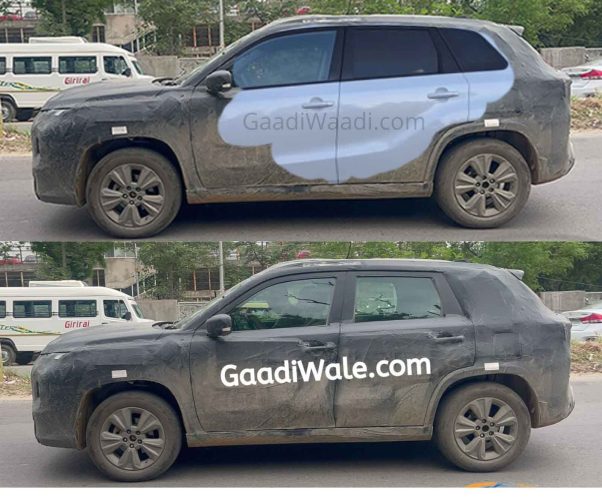 Besides likely having a high safety standard, the upcoming Vitara is said to be fuel efficient as well. It could act as one of its biggest USPs as the largest carmaker in the country won’t sell the 4.3-metre long SUV with a diesel engine. To compensate for the lack of oil-burner as the segment still prefers diesel variants, Maruti Suzuki is expected to offer a mild hybrid and strong hybrid petrol engine.

This will help in having an expansive range to tackle rivals and since the upcoming Vitara will be highly localised, it is expected to carry an aggressive tag as well. The 1.5-litre four-cylinder K15C petrol engine with Smart Hybrid tech is expected to be on offer in the low-end variants producing just over 103 PS maximum power and close to 137 Nm of peak torque.

The strong hybrid system with Toyota’s expertise could give the SUV a high advantage in fuel economy and we can expect both manual and automatic transmissions to be available.