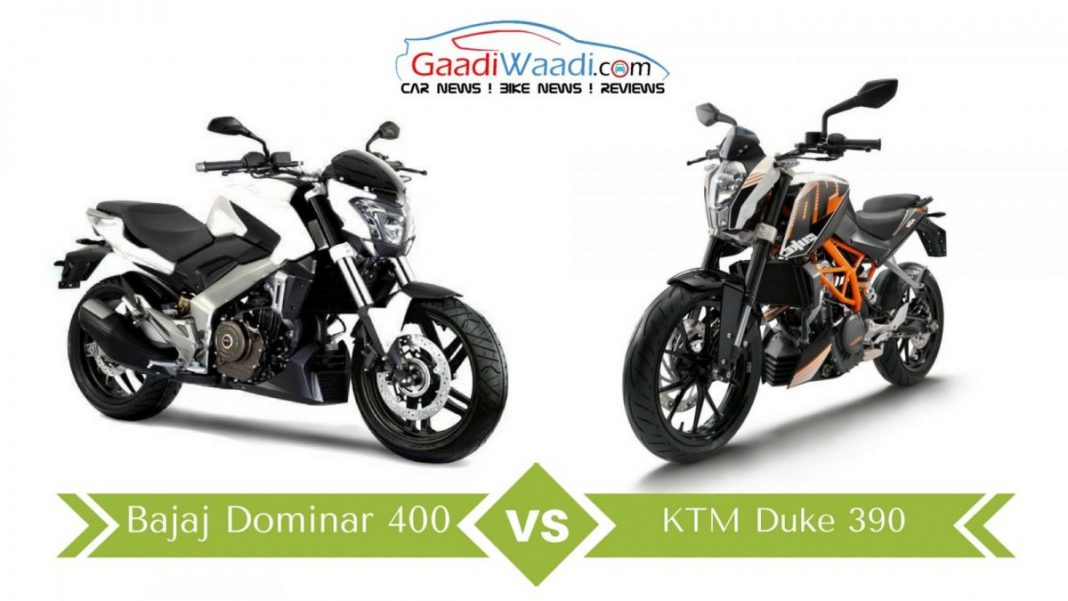 Bajaj is undoubtedly one of the leading motorcycle manufacturers in India. The two-wheeler brand has given the country Pulsar range of motorcycles one and half decade ago. Now, the home-grown outfit has launched its most powerful motorcycle till date, christened as Dominar 400. It is a celebrated motorcycle from Bajaj because it will ignite a ‘new brand’ name that will put the manufacturer in premium phrases.

Earlier known as the Bajaj Pulsar CS400 in concept form, this motorcycle directly sits in the 400 cc premium segment which is a new territory for the brand. Bajaj acquired 47% shares in KTM years ago and now selling the Austrian two-wheeler manufacturer’s products in the country and slowly it has adopted the Austrian’s technologies for its own product range paying dividends to a good extent. We take a look at the spec sheet based comparison between the new cruiser motorcycle and its rival KTM Duke 390 and we can assure it’s going to be exciting. Earlier Bajaj Pulsar RS200 went to compete against the KTM Duke 200 and now the bigger Bajaj Dominar 400 locks horn with the Duke 390. It is sort of an evolutionary approach Bajaj is trying to implement as the premium stature of the brand will be emphasised. Moreover, both bikes are set to do kind-of different purposes: one is a hardcore cruiser and the other is a supple yet capable highway runner. The Bajaj Dominar 400 comes with a sharp and aggressive design. It comes bearing the similar stance of the CS400 concept displayed at the 2014 New Delhi Auto Expo. Also it takes some design cue from the smaller sibling Pulsar 200NS. The large and aggressive looking headlamp will remind you off the 200NS. The Dominar 400 comes with a flat handlebar that will provide better commuting. The fully digital instrument cluster positioned on the headlamp cowl and another sleek LCD display on the fuel tank simply give the bike a modern character. Interestingly, both these features were seen in the concept model also. Apart from these, the Dominar 400 also comes with sculpted muscular fuel tank, stepped up saddle seat and sporty body cowls. The tail section of the motorcycle looks like it has stopped abruptly but brings a sporty feel. On the other hand, the KTM Duke 390 looks wild compared to the Bajaj Dominar 400. It gets the naked look, and the contrasting Orange-White-Black colour theme plays crucial role in making it stunning. It gets a bold and large headlamp, sharply designed very muscular fuel tank, stepped up seat and sleek tail section. The instrument cluster is fully digital and it is positioned on the handle bar instead of the headlamp cowl like on the Dominar.

Overall the KTM Duke 390 delivers a race spec appearance. Well, the motorcycle has been built that way to deliver a sporty vibe. However, the Bajaj Dominar 400 looks a bit poised and contemporary compared to its rival’s rugged look. The Bajaj Dominar 400 premium motorcycle gets power from a 373.3 cc single cylinder four valve liquid cooled fuel injected DTS-i engine. The most interesting part is that, this same engine does duty in the KTM Duke 390 as well. A 6 speed gearbox does the transmission duty in both the models. Well, despite sharing the same engine there are differences between these performance numbers. Talking about equipment, Bajaj Dominar 400 comes with large alloy wheels, drilled disc brakes at both front and rear wheels. On the suspension front the 400cc cruiser gets 43 mm telescopic fork at the front and adjustable monoshock at the rear. Compared to its Austrian rival, the Dominar 400 comes equipped with dual channel ABS. A 320 mm front disc and 230 mm rear disc does the braking duty. This motorcycle runs on 17-inch alloy wheels wrapped with tubeless tyres and is built on beam-type perimeter frame.

On the other hand the KTM Duke 390 is built on a tubular space frame. A 300 mm front disc and 230 mm rear disc does the braking duty in the model along with a single channel ABS. On the suspension front the motorcycle sports WP suspension upside down, while the rear gets WP monoshock. It runs on 17 inch alloy wheels wrapped with tubeless tyres.

Bajaj Dominar 400 comes quite stylish with aggression. It looks perfect for regular cruising, as well as it seems well capable for sporty performance also. Moreover, the trustworthiness of the Bajaj makes it more appealing. At a highly aggressive price of Rs. 1.36 lakh (ex-showroom), the Bajaj Dominar 400 looks like a good investment for people seek premium features and sporty performance from their motorcycles.

The KTM Duke 390, on the other hand, comes very rugged looking, as we have already mentioned earlier. With the naked design it looks perfect for those who seek sporty handling machine. Compared to the Dominar 400, the Duke 390 is much more powerful as well and delivers better performance. On the pricing front, the Austrian performance-oriented motorcycle is a bit more expensive compared to its Bajaj rival, as it gets a price tag around Rs. 1.90 lakh. Both these motorcycles will thrill you without a doubt but the affordability of the Dominar will be an eye-catching factor for the customers. On paper, they are no slouches as they can pull out heart-pumping speeds but the potential buyers’ purpose of owning these bikes will play as the decisive factor in choosing one.