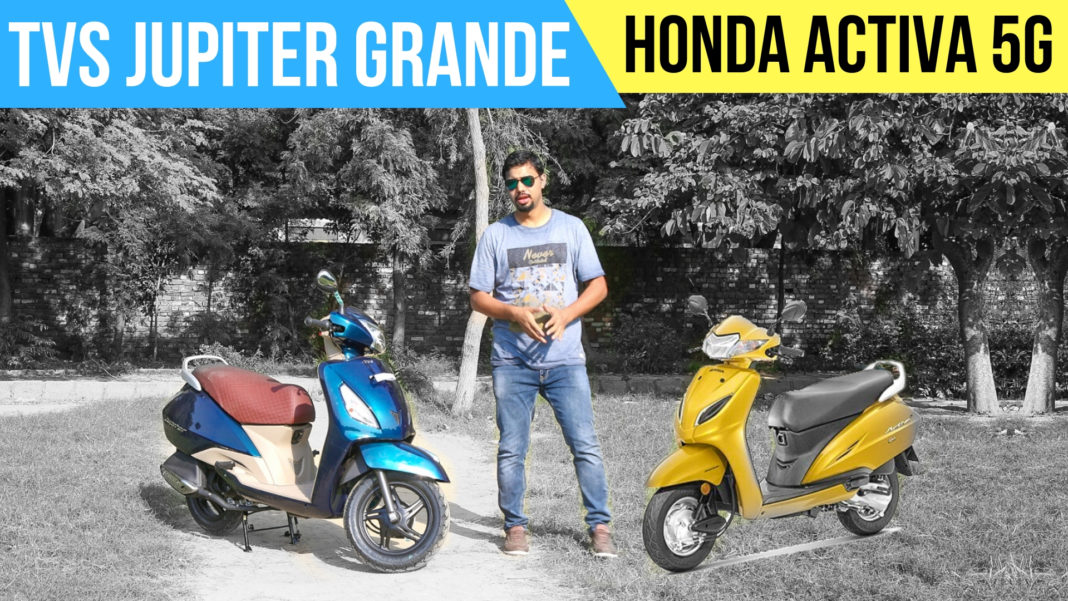 There is no doubt that the TVS Jupiter is one of the best selling scooters in India but when it comes to sales figures the it is nowhere near its Japanese rival Honda Activa. However, TVS is hopeful that they will close the gap between their biggest rival and thus decided to introduce a new variant of the Jupiter.

The TVS Jupiter Grande gets similar kind of features which you will find in the Honda Activa 5G and are also priced similarly. Below provided are a few parameters to prove which gearless Scooter is better than the other. We have compared both the scooters side-by-side in terms of practicality, power, fuel efficiency, pricing, and features in our TVS Jupiter Grande vs Honda Activa 5G comparison here:

Both the scooter generates almost the same amount of power while the Activa generates slightly more torque than the Jupiter Grande.

The newly introduced TVS Jupiter Grande uses the identical suspension setup which can also be seen on standard Jupiter. The front gets a telescopic fork while the rear profile uses a gas charged monoshock setup which is also adjustable. The scooter is offered with both drum and disc brake setup.

The Honda Activa 5G, on the other hand, gets Spring Loaded Hydraulic Type setup for both the front and rear profile, disc brake availanle in top variant of Grande too.. The Activa 5G does not get disc brakes and relies on 130 mm drum brakes for both its wheels while CBS is available as standard.

Both the scooters look clean in terms of styling. The recently launched TVS Jupiter Grande shares the same bodywork with the Jupiter but gets some additional features in the form of new LED headlamps with integrated LED DRLs – just like what we can find in the already launched Honda Activa 5G.

The Jupiter Grande also has been fitted with a new semi-digital instrument cluster which is also present in the existing Activa 5G. In terms of cosmetic updates, the recently launched TVS scooter features a brown seat with quilt finish which looks quite premium and is the only feature which you won’t find in its rival.

Both the TVS Jupiter Grande and the Honda Activa 5G offer similar kind of features. Both the scooter gets impressive under seat storage with mobile chargers while Honda also offers a new 4-in-1 lock with seat opening switch which comes in quite handy at times. Both the scooters also get tubeless tires for the convenience of the rider. LED headlamps now come with AHO feature as standard to offer better visibility at night.

Both the Honda Activa 5G and TVS Jupiter Grande offer similar kind of features and power. The TVS scooter is priced slightly higher than its Japanese rival which also provides CBS system. In terms of fuel efficiency figures, both the scooters are almost close but Jupiter Grande edges by 2 kmpl.

Since we have tested them, we can say that the Jupiter offers better ride quality while the handlebar is very lighter as well offering good manoeuvrability. It also is the easier scooter to ride in traffic conditions and the handling is better. Moreover, the TVS Jupiter Grande has 12-inch wheels as opposed to Activa’s 10 inchers.