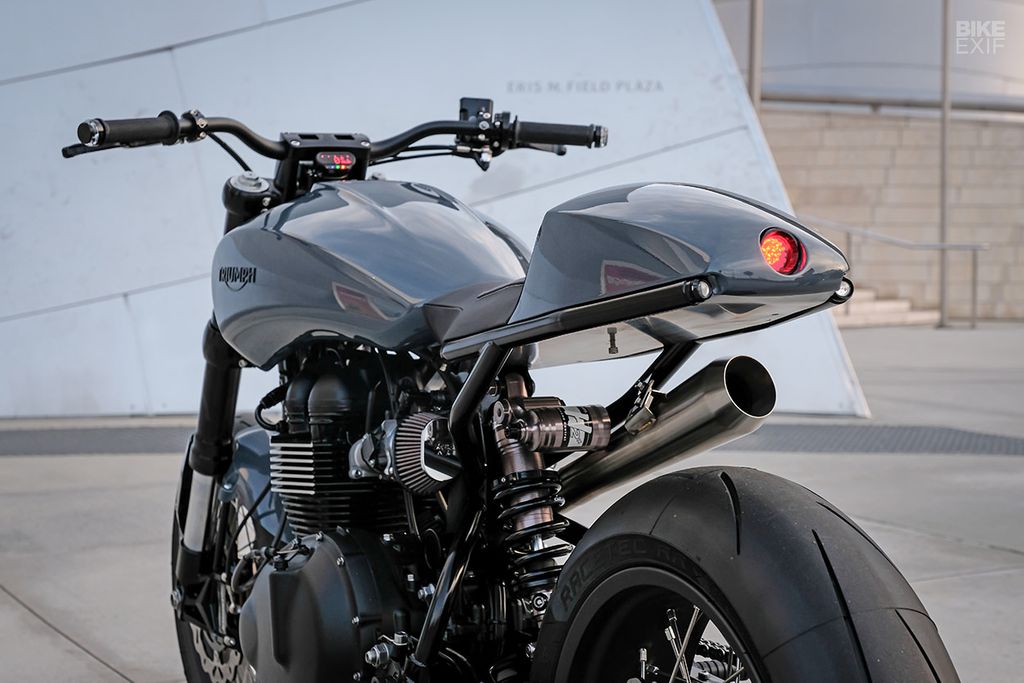 The 865 cc engine was completely stripped out and after the modification, the power and torque output has doubled compared to the stock engine

Triumph Scrambler series is one of the best looking in its class, but some people think that the bikes have more potential and Justin Webster is one of them. He owns a J.Webster Design and decided to unleash the Scrambler. Justin runs his custom shop alone and all the works are done by him alone. This custom Triumph Scrambler 900 looks like a concept model.

The most interesting part about Justin is that he learned all these things by himself and this Scrambler project is only his fourth. Initially, he completely stripped out the Scrambler and to keep weight down, he turned the engine into a stressed member and the rear section was completely rebuilt from the stock bike.

The stock front suspension has been replaced by 50 mm Marzocchi forks from a Ducati Hypermotard and the bikes get an integrated GPR V4 rotary steering stabilizer. The twin shocks have given way for a fully adjustable mono shock suspension at the rear as both front and rear suspension has 7-inch travel, which will improve ride quality over broken roads.

The Scrambler 900 gets a new round LED headlamp at the front and the raised single seat with rear set foot pegs along with a single piece handlebar, which is positioned slightly higher gives a sporty riding position. The rear fender is made from carbon fibre and the LED tail lamp is integrated into it with indicators embedded into the frame.

The fuel tank for the custom bike comes from Indian Scout, but Justin has made some slight tweaks to attach it to the frame and the fuel filler comes from Suzuki GSX-R. The stock 865 cc engine was completely stripped out and Justin increased displacement to 995 cc with Nikasil-plated billet aluminium cylinders, Wiseco pistons and Carrillo rods.

To make the engine rev more freely, he removed the counterbalance system and crankshaft dynamically balanced. The power and torque output has doubled compared to the stock engine and the braking system has been upgraded with Beringer disc at front and rear.  The wheels are 17-inch at front and rear with Metzeler Racetec RR K3. Justin is thinking about building this custom bike as a limited edition model.