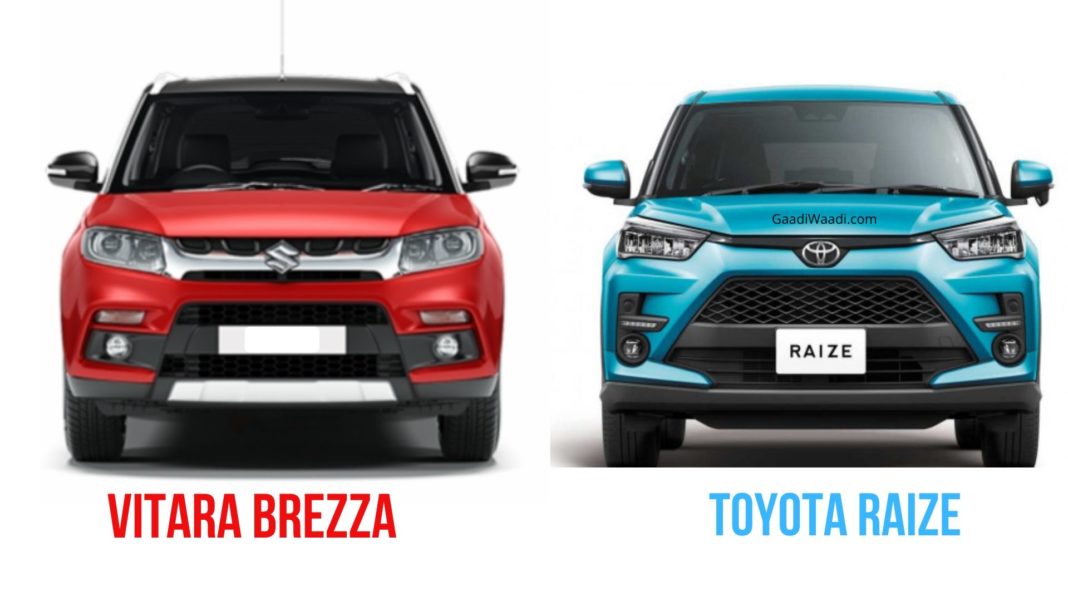 Toyota has launched its sub-4m SUV, Raize, on 5th November in Japan. Having a length of under 4 meters, Toyota may bring the Raize to India in the near future to pit it against other sub-compact SUVs like the Maruti Suzuki Vitara Brezza, Hyundai Venue, Ford EcoSport, etc.

Overall, both the Raize and the Vitara Brezza are only separated by marginal differences in terms of size. Here are the dimensions of the two –

In terms of external styling, both the Vitara Brezza and the Raize have an overall boxy design. The Brezza has a more conventional design, and has aged a little compared to the Raize, which looks sporty and fresh. 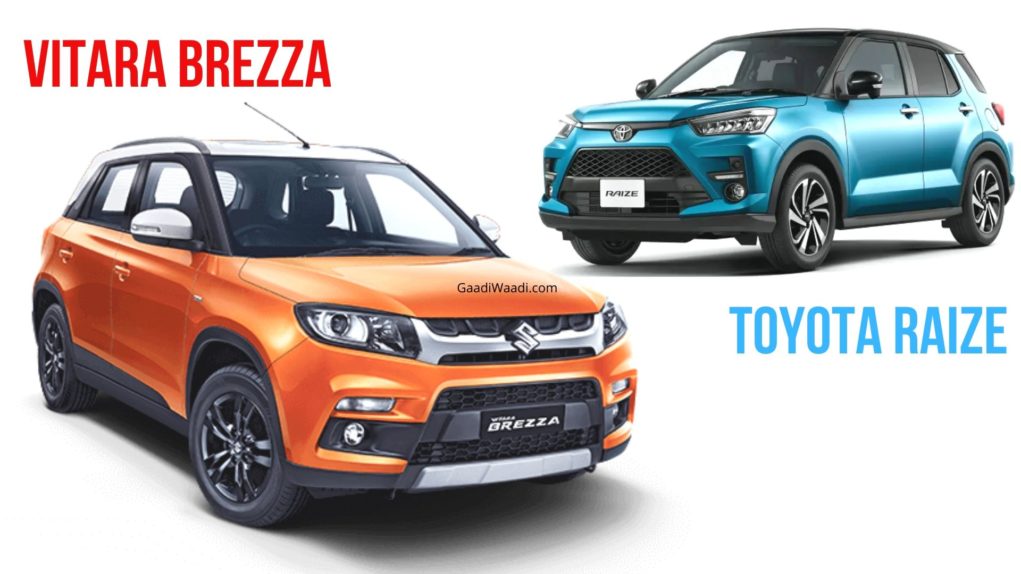 At the front, the Vitara Brezza gets a chunky horizontal chrome grille, adjoined by the headlamps on both ends. The Raize, on the other hand, gets a black mesh front grille, with the only chrome treatment at the front being the carmaker’s logo. The turn indicators on the Vitara Brezza are independent rectangular units placed above the fog lamps, something we can also find on the Toyota Raize.

At the rear, the Vitara Brezza gets LED tail lamps on the top-end variant, along with a chrome strip bearing the car’s name. The conventional look is further aided by a faux skid plate and tiny rear reflectors. Expect the Raize to get a sportier design for the rear as well, with LED tail lamps and plastic inserts on the bumper to make the things a little more interesting.

The Vitara Brezza makes do with 16-inch alloy wheels, whereas the Raize gets 17 inchers. Also, both the cars come with a long list of monotone and dual-tone options. 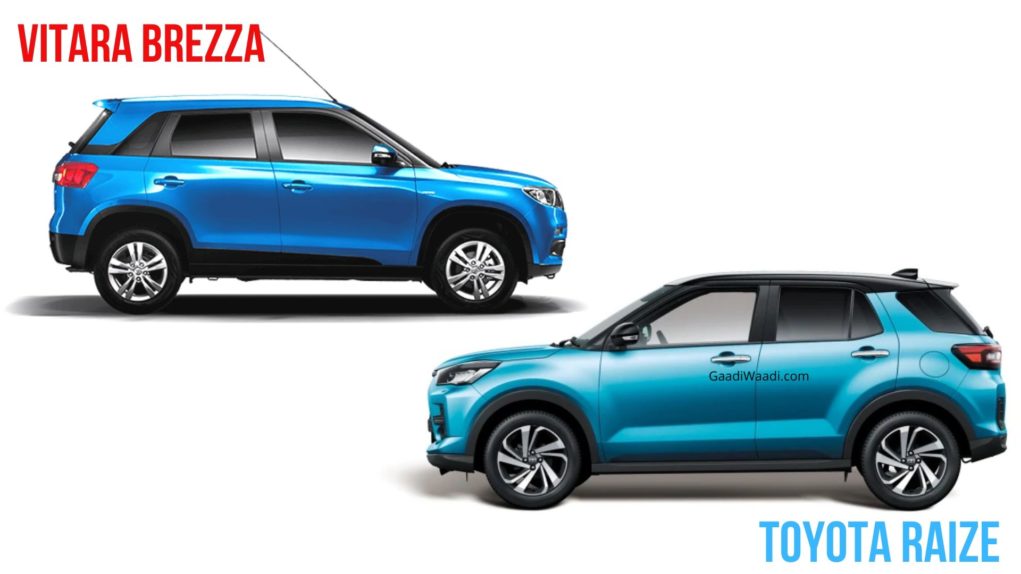 Maruti Suzuki currently offers the Vitara Brezza with a 7-inch touchscreen infotainment system, integrated with Maruti’s Smartplay system, Android Auto and Apple CarPlay along with automatic climate control, steering-mounted audio and Bluetooth controls and armrests for both the front and rear passengers.

Over the latter, the Japanese-spec Raize gets an 8-inch floating infotainment system, along with a digital instrument cluster. The interiors of the Raize look more modern, as compared to the Vitara Brezza, however Toyota is yet to offer Apple CarPlay and Android Auto connectivity with its cars in India. There is a wide range of accessory options as well as TRD and Modellista kits with the Raize making it more appealing in Japan.

Maruti Suzuki has equipped the Vitara Brezza with only one engine, which is the Fiat-sourced 1.3-litre diesel unit, that produces 89 HP of peak power and 200 Nm of peak torque. The Japanese carmaker is also set to introduce a BS6-compliant petrol engine for the SUV sooner. 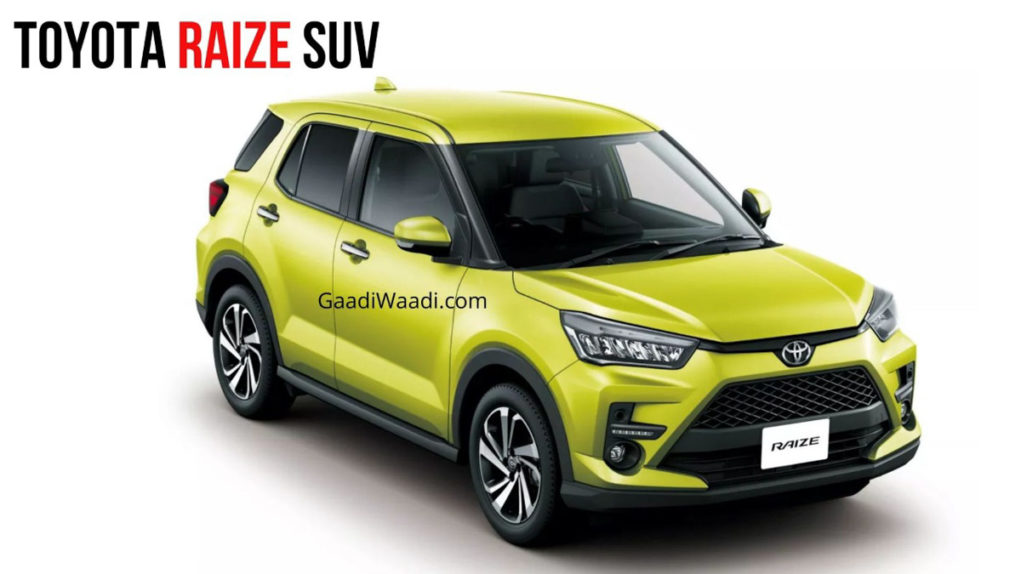 Toyota is offering the Raize with a a 1.0-litre, three-cylinder petrol engine which makes 98 HP of max power and 140 Nm of max torque, in Japan. The Japanese version of the Raize comes with a host of driver-assisted tech, but the most interesting addition is the optional 4WD configuration on all variants.

Toyota could consider using the Raize’s platform for the next-gen Vitara Brezza but what is certain is that the Brezza will be manufactured at TKM’s plant from 2022.

The Raize’s first impressions have been so well documented online and it could be an appealing product if Toyota decides to bring it to India. But, the Vitara Brezza is the segment leader and it is waiting to get a facelift as well with addition of new features. The rebadged Vitara Brezza carrying Toyota badge will be launched in the near future eliminating the need of a separate compact SUV from Toyota but Raize could have a say in the next-gen Vitara Brezza.