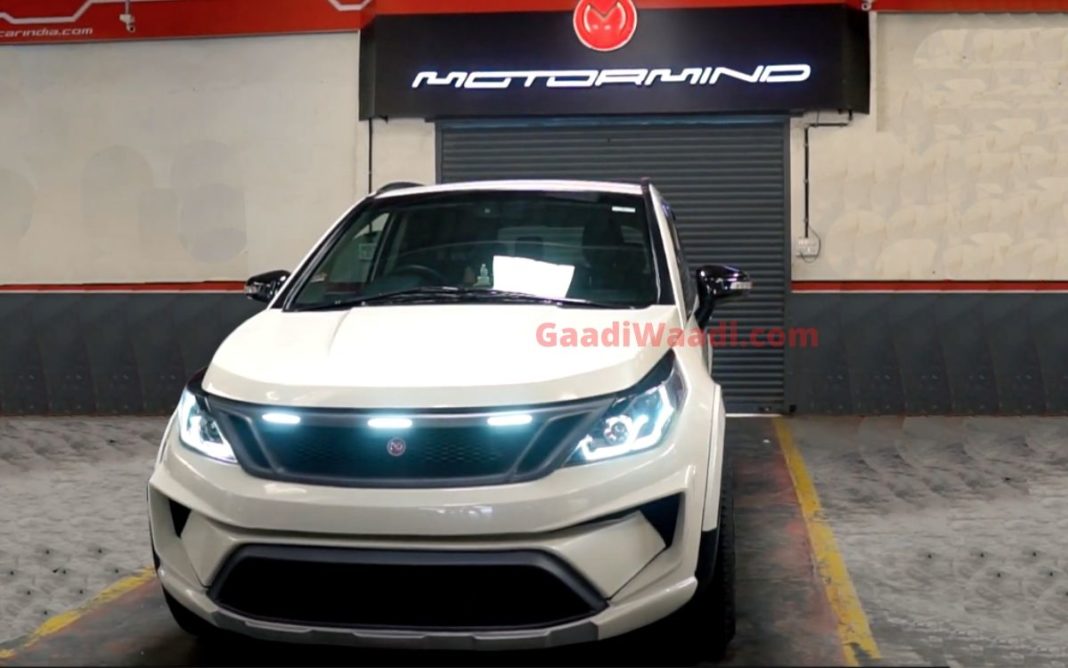 Tata showcased the BS6 Hexa Safari edition at the 2020 Auto Expo, and the updated SUV will be launched with 4×4 drivetrain likely in late-2020

The Hexa is one of the most premium yet rugged Tata cars ever built, and the seven-seat SUV has its own cult following, which is the reason why Tata decided against discontinuing the car for now, even when its sales are somewhat cannibalised by the Harrier. Existing Hexa owners seem to swear by the car’s premiumness and performance.

A modification firm from Bengaluru called ‘Motormind’ has completely customised a white Tata Hexa into looking like a sporty and muscular car, thanks to external modifications like a new front radiator grille with integrated LED DRLs. The headlamps have also been fitted with daytime running lights inside them, while the Tata logo on the front has been replaced by a Motormax emblem.

The front bumper features a huge air dam, as well as new side vents. The car seems to be running on bigger wheels, and gets blacked-out alloys. The wing mirrors have been covered in glossy black, while the plastic cladding on both the front and the rear fenders features body-coloured elements.

At the rear, the said Tata Hexa gets a new aggressive bumper, a thick black strip running between the two tail LED tail lamps, with the Tata logo replaced with the Motormax one, just like the front. The rear bumper gets a skid plate, along with dual exhaust outlets. The rear bumper also features side vents on each side.

It was previously speculated that the car will not be upgraded to comply with the BS6 emission norms, but Tata confirmed that the SUV will go on to live when the company showcased the ‘Hexa Safari Edition’ at the 2020 Auto Expo.

Under the hood of the BS6 Hexa likely be the Tata’s 2.2-litre Varicor diesel motor that puts out 156 PS of max power and 400 Nm of peak torque. The transmission duties will likely be handled by a 6-speed MT, as well as an optional AT gearbox.