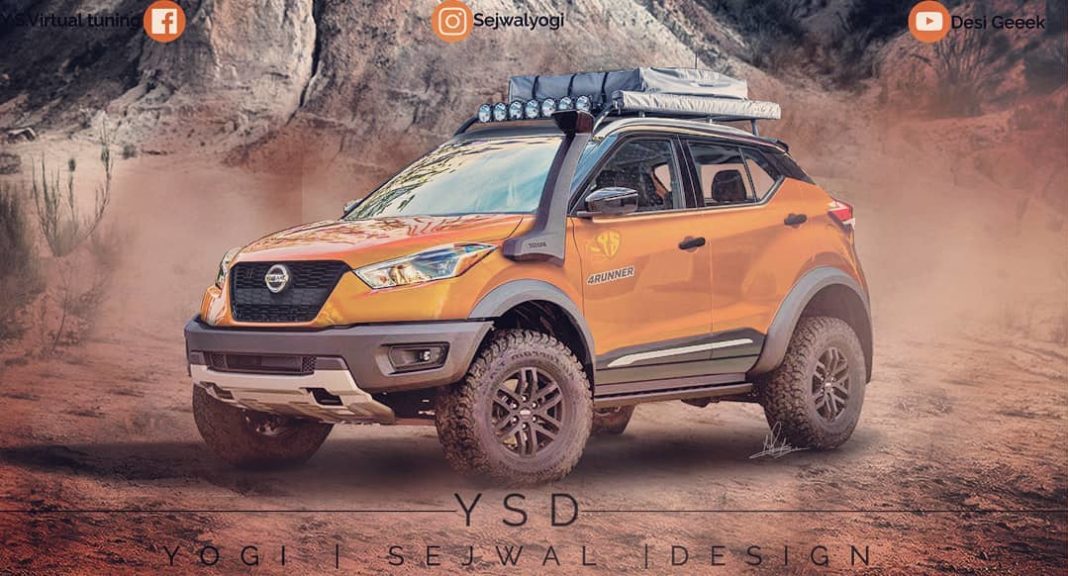 Nissan officially launched the new Kicks in January and it is based on the Renault Duster platform to keep cost down as global-spec model is based on new V-platform.  The exterior design theme of India-spec Kicks is slightly different and even though it is bigger than Creta in dimension, the SUV looks compact especially in images.

We have already posted a Harrier rendered with off-road elements from a Youtube channel called Desi Geek. Now they have come up with a new rendering for Kicks, which has lots of off-road customizations. The modified Kicks gets new off-road spec tyres, which is bigger than standard tyres along with a new black plastic cladding and flared wheel arches.

The ground clearance has been increased and the Kicks also get a snorkel, which will help during water wading.  The India-spec model already comes with roof rails and the company confirmed it is a functional one, which can be used to carry different things. In this rendering, the Kicks has a roof rack attached to the roof rails along with new LED lights to make night driving easier.

Then the stock grille has been replaced by a new black finished one with Nissan logo in the grille. The front also gets a new bumper finished in black colour along with redesigned fog lamp inserts and silver finish scuff plates. The Kicks is finished in a dual-tone black and orange colour, this particular colour theme is not yet available in the Indian market.

This customization gives a new aggressive look for Kicks. Some owners might take inspiration from this and customize the Kicks like this. The initial response for the Kicks is good and the company has sold more than 1000 units in the first month. The sales will take some time to stabilize and the pricing is also on the aggressive side.

The Kicks is powered by 1.5 L petrol and diesel engines. The 1.5 L H4K petrol engine puts out 106 PS of power and 142 Nm of torque while the 1.5 L dCi diesel produces 110 PS & 240 Nm, these engines are mated to a manual transmission. Nissan has packed the Kicks with lots of features like climate control, touch screen infotainment system, LED headlamps, soft touch leather dashboard and more.