Check out this modified RE Interceptor 650, the aesthetic of which seems inspired by a certain orange-flavoured cold drink

In 2018, Royal Enfield first launched the Interceptor 650 and Continental GT650. Fast forward to 2021, and the RE 650 twins can be found on various forums all over the internet, mostly the ones the cover customised motorcycles. To be honest, we’re enjoying it a lot, as most of these modified motorbikes are brilliant pieces of automotive art.

Here, we bring you another example from Cyprus, Greece. This here is a beautiful RE Interceptor 650, the pictures of which were shared online by Wren Maher. Let’s take a closer look at the visible details. The first thing that catches our eye is the bright orange paint job, along with blacked-out details, including the engine assembly, exhaust, etc.

There’s also a black racing stripe running longitudinally on the fuel tank. At the front, we see a new headlamp cowl and blacked-out visor, and the stock rear-view mirrors have been replaced by bar-end units. The bike gets a single seat, along with a racing-style cowl at the back. The rear fender has been shortened and sports a custom numberplate holder, which makes the tail looks cleaner. The bike also gets a pair of custom exhausts, with insulated wrapping on the pipes. 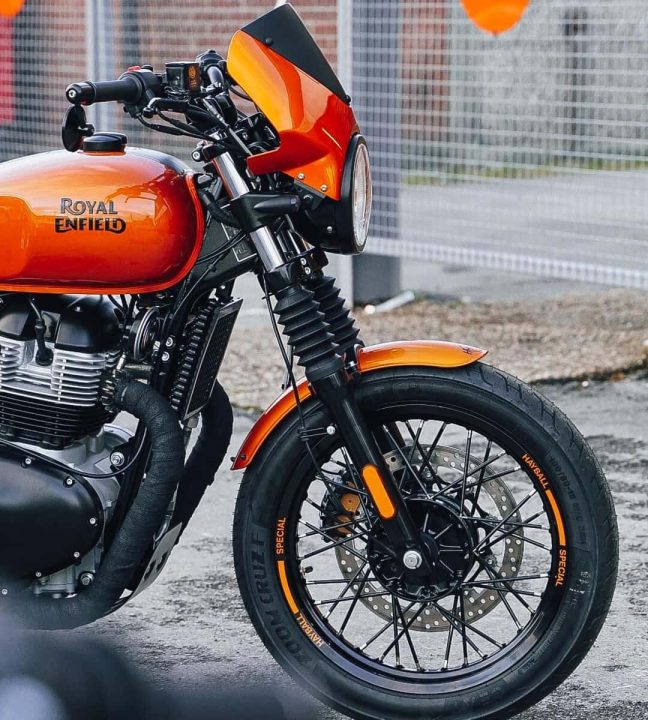 Perhaps the most interesting design detail is on the rear shock absorbers. The gas canisters on the dual rear shockers have been modified to resemble Fanta cold drink cans! Other than that, the 18-inch wire-spoked wheels have been blacked out and sport orange highlights, which match the rest of the motorcycle.

Overall, we’re really impressed with this custom-built Royal Enfield Interceptor 650. The styling is lovely, playful, and extremely attractive. No details about changes to the powertrain were shared alongside the pictures, so we’re not sure about any performance mods installed on the motorcycle. 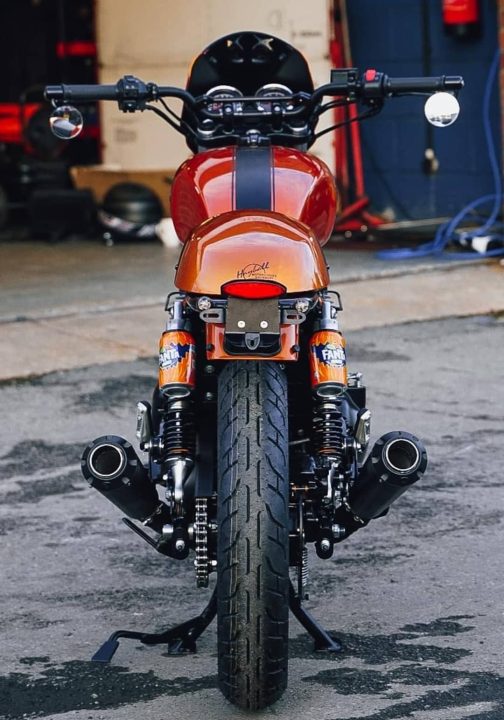 A stock Royal Enfield Interceptor 650 (and Continental GT650) draws power from a 648cc, air/oil-cooled, parallel-twin engine. This motor can belt out a peak power of 47.65 PS and a maximum torque of 52 Nm. The transmission is a slick-shifting 6-speed gearbox, which gets a slipper & assist clutch as standard. The power isn’t much, but the performance matches well with the retro aesthetic of the motorcycle.