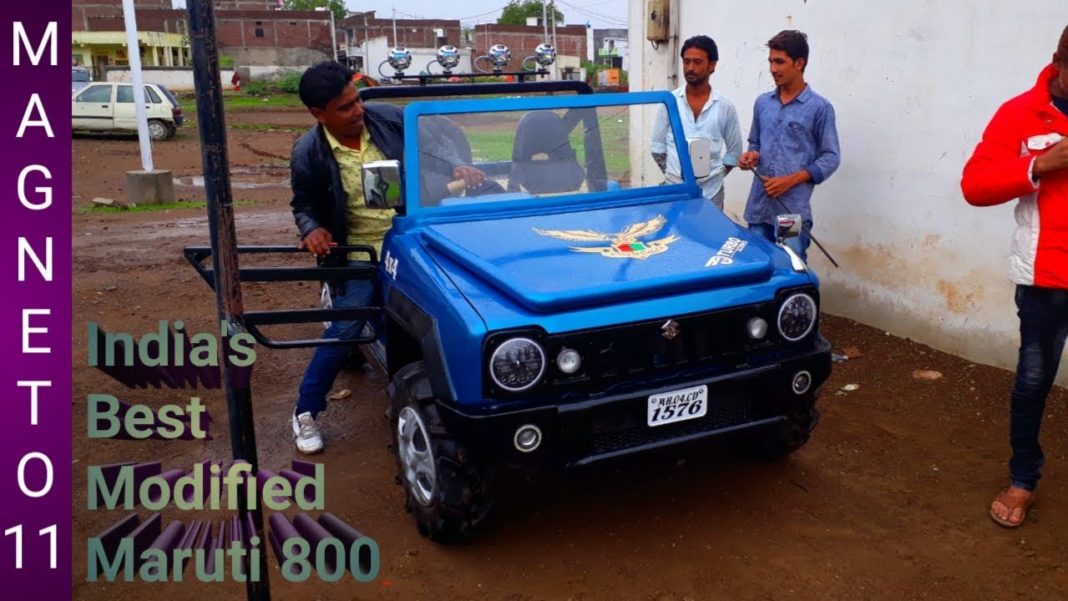 The legendary status of the Maruti Suzuki 800 hatchback is well documented as it left an undeniable mark in the Indian automotive history. The production ended more than six years ago before being replaced by the Alto 800. It still has a cult following and many in the suburbs use it as a daily driver. Being a very cheap five-seater in the car market, people own it as a hand.

Even currently, the Maruti 800 is a favourite model for customisation as well as its no-frills looks and supple boxy exterior do encourage owners to have their hands dirty or take their cars to aftermarket shops. Here we have the small hatchback modified into a Jimny off-roader and the ambitious project does deserve a feature in our books.

The YouTube video posted by Magneto 11 shows how much work has been put into modifying the 800. The customisation begun by removing the roof alongside the headlamps, tail lamps, front and rear bumpers. The front bumper was fabricated at their own workshop as it is made of metal. Besides the modified bonnet, the custom Maruti Suzuki 800 also gets front grille that looks like the previous generation Jimny.

Other highlights include LED projector headlamps, clean lens turn signals, bigger tyres, restyled wheel arches, auxiliary lights on top of the rigid bar, tail lamps carried over from the hatchback and new wing mirrors. On the inside, the modified 800 features a white coloured dashboard with blue panels, and side facing seats for the rear occupants.

The blue body paint does add glitter and authentic feel to the customised Maruti 800. Considering that all the fabrications are done at their own workshop, a round of applause has to be given as it does not look like a mere replica. In another news, Maruti Suzuki is expected to launch the Jimny as a replacement to the Gypsy sometime next year in India.

It will likely be a five-door model having an overall length of under four metres. It will compete against the next-gen Mahindra Thar and Force Gurkha. As for the performance, the 1.5-litre K15B four-cylinder BSVI SHVS petrol engine could be used.