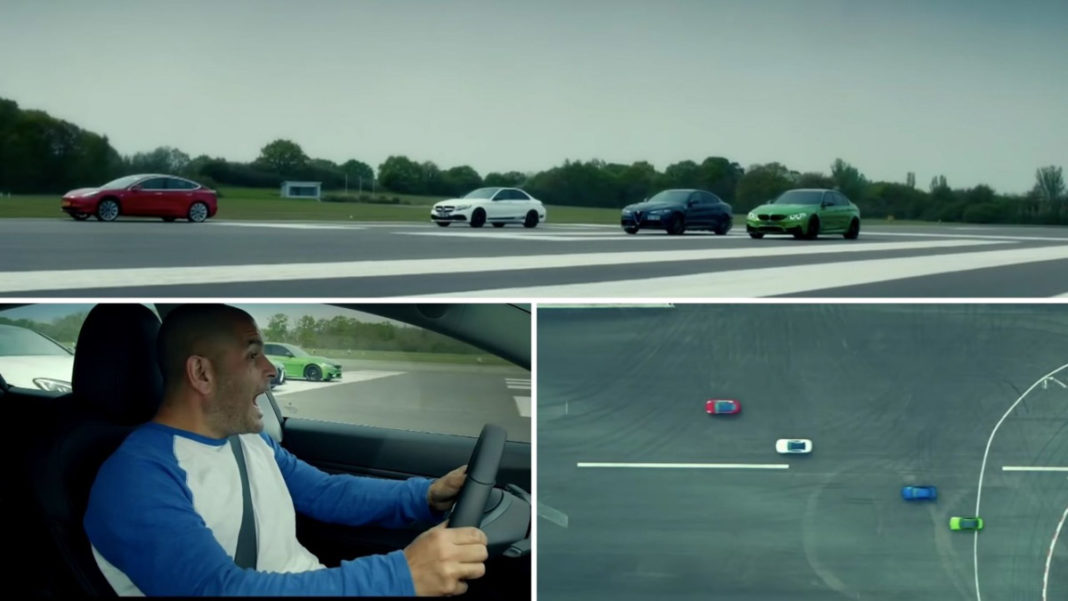 This should make for one heck of a battle, isn’t it? Tesla Model 3 going up against Mercedes-AMG C63 S, BMW M3 and Alfa Romeo Giulia Quadrifoglio is what dreams are made of for not just the enthusiasts but also the people who couldn’t suck in the electrification push.

Top Gear has tested the Model 3 Performance version and it comes equipped with dual electric motors capable of delivering a massive 444 horsepower at the tap. The main host Chris Harris pitted the hardcore Model 3 against its performance-based competitors in a rather unusual half-a-mile race as opposed to a quarter mile drag race.

The Tesla Model 3 Dual Motor Performance is good enough to generate a maximum torque of 638 Nm and is claimed to achieve zero to 100 kmph in just 3.4 seconds. It can reach a top speed of 261 kmph and it features a number of performance upgrades as well to make things interesting.

It gets 20-inch alloy wheels with Michelin rubber, carbon lip spoiler, reduced ride height, performance-based braking system and most importantly, Track mode to further enhance its tractability. Upon its arrival, Elon Musk claimed that the Tesla Model 3 Performance “will beat anything in its class on the track”.

The way it drives is unlike anything you could see on the standard Model 3 according to Chris Harris. How did the drag race pan out? The intention behind making the race half-a-mile long was that electric cars are too good off the line compared to the regular petrol-powered cars.

As expected, the Tesla Model 3 Performance left the rest of the contenders in its wake at the start and had a massive lead. The way it got to 100 mph was total insanity. However, in the closing stages of the race, the Bimmer, Alfa and Merc were breathing down the Tesla’s neck.

At the chequered flag, the Mercedes-AMG C63 S caught the Model 3 Performance and beat it to the finish line. Nevertheless, the way the electric model pulled off the line was just bonkers and Harris billed it as “AK47 disguised as a butter knife”.