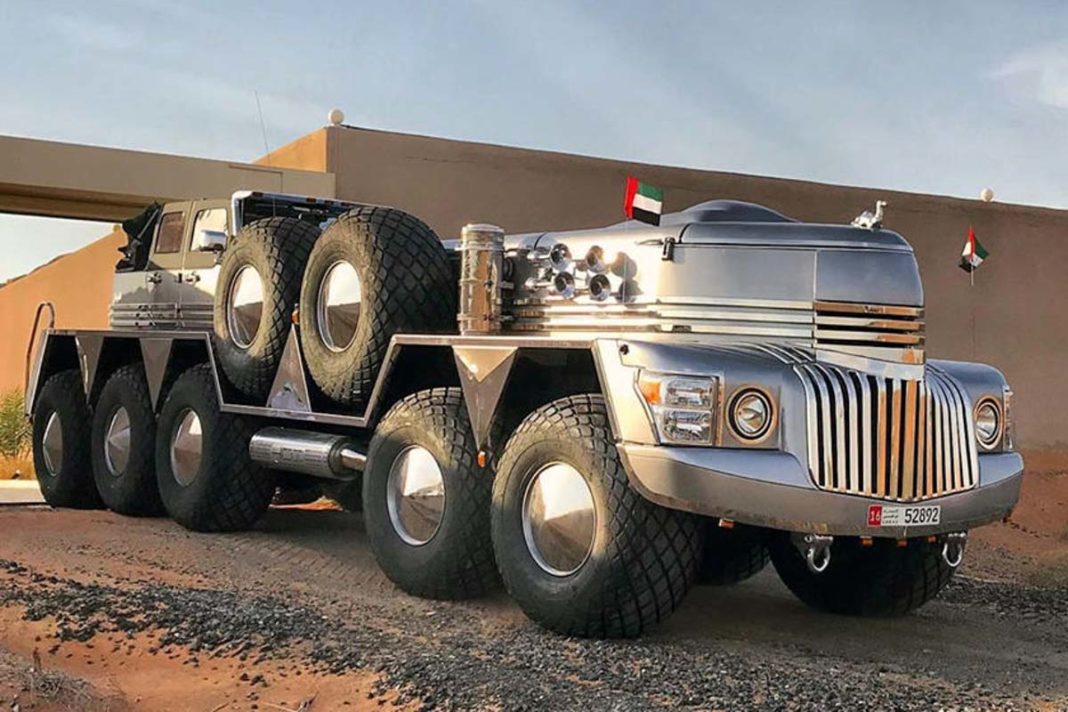 Commissioned by a Sheikh based out of Abu Dhabi, Dhabiyan is the biggest SUV in the world; based on the Oshkosh M1075 military truck

Meet Dhabiyan, a monstrous vehicle that is being touted as the biggest SUV in the world. The 10-wheeled vehicle belongs to a sheikh and weighs a whopping 24 tonnes. It shares many parts of its body and the engine with an Oshkosh military truck, while the driving cabin is actually a Jeep Wrangler SUV.

The Dhabyan has been commissioned by His Highness Sheikh Hamad Bin Hamdan Al Nahyan, who is a member of the ruling family of the Abu Dhabi. He is known as ‘Rainbow Sheikh’ since he paid Mercedes-Benz to manufacture an entire batch of S-Class for him in each of the natural colours. What makes these vehicles special is that each of these vehicles have each and every part coloured in the specified paint.

The 10-wheeler 24-tonne SUV is based on the Oshkosh M1075 military truck with PLS (Palletized Load System). It has the Wrangler’s body fixed towards its rear-end. The Dhabiyan measures 10.8-metres in length, 3.2-metres in height, and 2.5-metres in width.

A look at the Dhabiyan is enough to gauge its huge size. It’s not just the Oshkosh military truck and the Wrangler that has gone into making this SUV a reality as it even has parts of various other vehicles. For instance, it gets some cosmetic parts from the Ford Super Duty pickup truck and even a Dodge Dart.

Of course, a vehicle of the size of Dhabiyan requires to be powered by an engine that is powerful enough to haul the beast. Luckily, it gets its power from the same engine that powers the Oshkosh M1075. The 6-cylinder diesel motor displaces 15.2 litre and pumps out a massive 600 hp of maximum power.

You can even check out the Dhabiyan at the Sheikh Hamad Bin Hamdan Al Nahyan’s Instagram page, where he has been regularly putting new pics and details of his latest possession. The massive SUV is currently displayed at the Emirates National Auto Museum in Abu Dhabi.