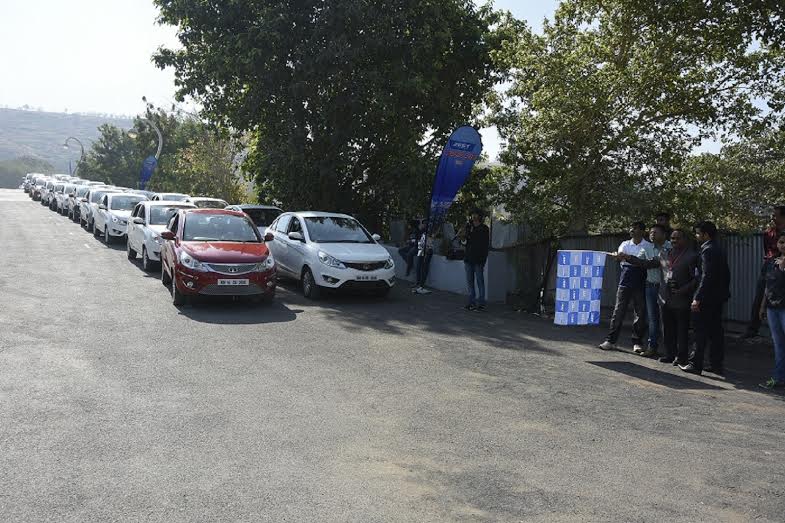 Tata Zest Enters Asia Book of Records by getting its own brand of vehicle in one single convoy at the same time, with the new Zest and Bolt

Tata Motors is recently on a spree to make sure their new products get all the promotions through clever marketing. They launched new products with never heard features, they made new engines. They promoted twins such as Zest and Bolt through all mediums of advertising and same has been done for Zica and Nano. Safari doesn’t need anything, it’s a cult already. Hexa will get it too. However, for now the Indian manufacturer has gone ahead and took the challenge of getting into the Asia Book of Records by doing a simple and a large feat.

Today, the company participated in a record-breaking rally with its customers to enter the Asia Book of Records. The Company made into the Asia Book of Records by lining up 154 Zests compact sedan cars. The venue for this rally was held in Pune. The Convoy started and ended at Pan Card Club, Baner, Pune. ​The rally was not done in one shot, but done in batches of 3. All the cars covered a total distance of 21.19 kilometers.

Meanwhile, it continued to Focus on customer entertainment culture by organizing an event. Tata Motors went ahead with a unique, initiative called the #GetSetBolt, with the hashtag. This was a mileage rally for all Tata Bolt customers. The successful rally the was initiated with a similar feat along the Zest, that was done in the past which ran across 19 cities with 665 cars.

The Special initiative for the owners of the Tata Zest, where the Company engaged with Zest customers in a mileage challenge for its Petrol and Diesel variants. More than 2000 Bolt owners/customers participated in this rally and recorded the highest mileage. The petrol achieved 47.69 kmpl and diesel gave 37.54 kmpl. The rally was a record rally for Tata Motors that happened in Pune.

Tata Motors says that they aims to culminate this initiative in a grand way with its customers. Let’s wait and watch happens next as the company continues to be relentless with its product as more products on their way. The products deserve more attention then they deserve as the company has been pouring heart, soul and lot of cash into them to make them stand out.