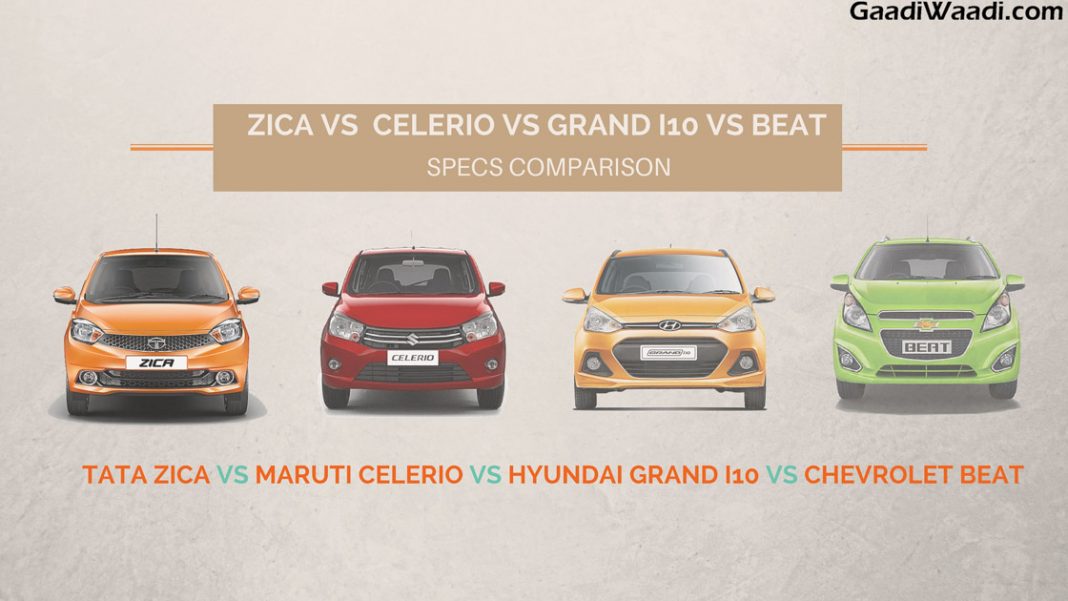 With the launch of the Tata Tiago, the entry-level hatchback segment now has one more choice for the prospective buyers

Tata Tiago has all the potential to be game changer for the Indian manufacturer as it’s all-new and will change the perception of the brand among potential customers. As always, Tata has been late to the party and has a lot of stiff competition and it will try to achieve what the Bolt and Zest have failed to, with the Tiago.

Tata bets high on the Tiago and continues to be relentless in the quest of volumes and fame. We compare it with the main rivals and incidentally the potent hatchback seems to overpower them. However, there are still ups and down in all these products as we find out who exactly wins the “Paper test”

Dimension wise, Tiago wins the battle pretty much and in fact nails it. It is the largest car, the widest car, but not the tallest car as the honour goes to the Celerio as it is taller by just 25 mm. Wheelbase trophy goes to both Grand i10 and Celerio which share same wheelbase at 2425 mm. All of that also means that it has the highest amount of boot space and segment standard knee room. Beat comes last as it has very small boot and knee room is just about adequate.

Exterior of these cars are something special indeed. Beat manages to look fresh, young and quirky in the right way after a recent facelift. Celerio is the new kid on the block and is the best Maruti in terms of styling when it comes to small car design from the Indian manufacturer. Boxy yet modern and fresh elements are seen. Typical Hyundai, with the new generation fluidic design and modern approach are easily the best combination of style and conservative design for the Grand i10. Tiago on the other hand looks similar to the Ford Figo, but first glance reminds you of the Honda Brio, but with a more substantial stance. Front-end is very Tata indeed of the recent times and rear is where the car excels with sharp lines and impressive tail lamps. Side profile is the best seen on any Tata car till date. Build quality wise Tata and Chevrolet score high on the outside and the Celerio and Grand i10 built are almost identical and reflects in many ways too. Tata Tiago vs Beat Vs Grand i10 vs Maruti Celerio Interiors

Interior and Hyundai are winners from the beginning. However, the Celerio is not far away as quality levels are there. Chevrolet has always given quality interior with the car made that were made in their home ground. Tata also falls in the same category now and quality is great. Fit-finish on all these cars is brilliant too. That means it depends on taste, whether one wants a black interior or in Hyundai’s case, dual color interiors.

There is no doubting all these cars have superior interiors. However, Celerio interior looks basic, Beat interiors are good, but dated despite motorcycle inspired meters. Hyundai interior looks about fine, but it is on the verge of getting outdated. Tiago has the modern and fresh looking interior with the center console being well-defined. Features wise Hyundai should nail it again, but this time too Tiago is just right behind and on the verge of bullying it. It has infotainment screen with navigation system, 8 speakers Harman audio system that comes with USB, AUX and Bluetooth options. Hyundai does offer keyless entry, start-stop button, 1 gb storage and has same info screen. However, the Tiago has multi drive modes to back itself.

Celerio sound system is just about good. Celerio and Beat also have info screens, but the Celerio has a better one. All cars have electronically adjustable ORVMs. However, Beat’s audio system is no match for these cars in stock form. All these cars have steering mounted controls as well on top-end models. It is a tough fight between the Zica and Grand i10 when it comes to features. Celerio comes late and third places goes to the Chevrolet Beat. Again on paper the Tiago has everything it take against its rival when it comes to diesel. 70 BHP and 140 Nm from 1 litre 3-cylinder engine is impressive and segment standard. Petrol on the other hand produces 85 PS and 114 Nm of torque is good too.

However, Beat and Grand i10 have proper 1.2 4-cylinder engines making a similar amount of power and torque and offer surreal amount of refinement levels. Celerio comes last, but it is zippy as it is the most lightest car and offers good fuel economy. Performance wise the Grand i10 petrol has segment best and looks like it will stay that way. Diesel also is peppy, but performance isn’t adequate with either of these oil burners. Tiago and Grand i10 have identical numbers, meanwhile Beat has 58 PS over 48 PS of the Celerio and has more cylinders and capacity too, and ends up offering more refinement as it is the Multijet engine with a missing cylinder.

Torque wise all have 140 Nm, but the Celerio has 125 Nm. However, it is the lightest in the segment and then comes Grand i10. Beat and Zica have almost similar kerb weight figures. Diesel wise it looks like Grand i10 has an upper hand, but unlike the petrol it isn’t that far ahead as all these oil burners are city slickers at the end of the day.

Technology and money being pumped by the manufacturer means it is very close to decide who wins. All diesel cars are great, Celerio comes with smallest diesel engine and also the most fuel efficient hatchback of India. Beat offers a little more than the Celerio in every aspect right from bigger engines to better build quality. Features wise both are almost identical. Safety wise all cars offer everything they can on top variants. However, Maruti recently made all features available on any variant you like to have them on.

It is a big tie between the Grand i10 and the new Tiago as both cars are the entry level car of A2 segment. Tata says they benchmarked against it and they just went ahead in some cases and stood identical in some department, which makes it very difficult to make choices between them.