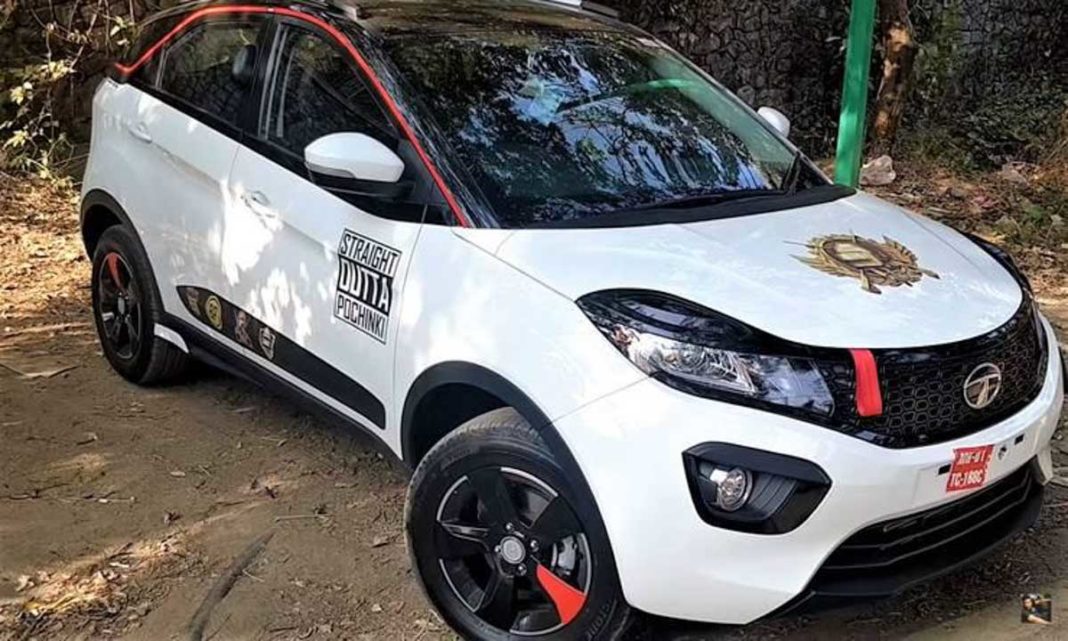 Tata Nexon has been customised with many slogans, stickers and accessories based on the highly popular PUBG game

PUBG is one of the most popular online games and one enthusiast in Mumbai has customised his Tata Nexon based on the PUBG theme. Most of the changes are focused on aesthetics as the front, side and rear have lots of PUBG stickers and logans, which make the Nexon look different from the regular model.

This customised Nexon also comes with a diffuser, which has fake bullets attached to the bottom. The interior continues the same PUBG inspiration with stickers and the centre console has a red jerry can which is used in the game for refuelling vehicles but in Nexon, it is used as air-freshener.

Apart from PUBG influence, the Nexon also come with red rhino kit as the compact SUV is finished in white and black colour along with red touches, which give a sporty look for the Nexon. The front gets bonnet lift band finished in red colour and the window line also comes with a red finish as it goes well with the black colour for the roof.

The alloy wheels are stock but it is finished in black colour but one spoke is finished in red colour giving a dual-tone appearance. The interior also comes with various PUBG accessories. Along with the red rhino kit, the owner of the Nexon has also added a skirt, which is priced at Rs. 1800. The total cost of PUBG accessories is Rs. 4,500 and it is available for all models.

But the red Rhino kit is priced at Rs. 35,000, which is expensive as the changes are many. The Nexon is currently the second best selling model in its segment and one of the reasons for huge success is because of its design theme as it is similar to the concept version while the interior is modern and quality is on par with the competitors.

The compact SUV is packed with lots of features like touchscreen infotainment system with Android Auto and Apple CarPlay, climate control, reverse camera, projected headlamps and more. The Nexon is the only car in its segment to get 5-star global NCAP safety rating and it is powered by both petrol and diesel engines with manual and AMT transmission options.