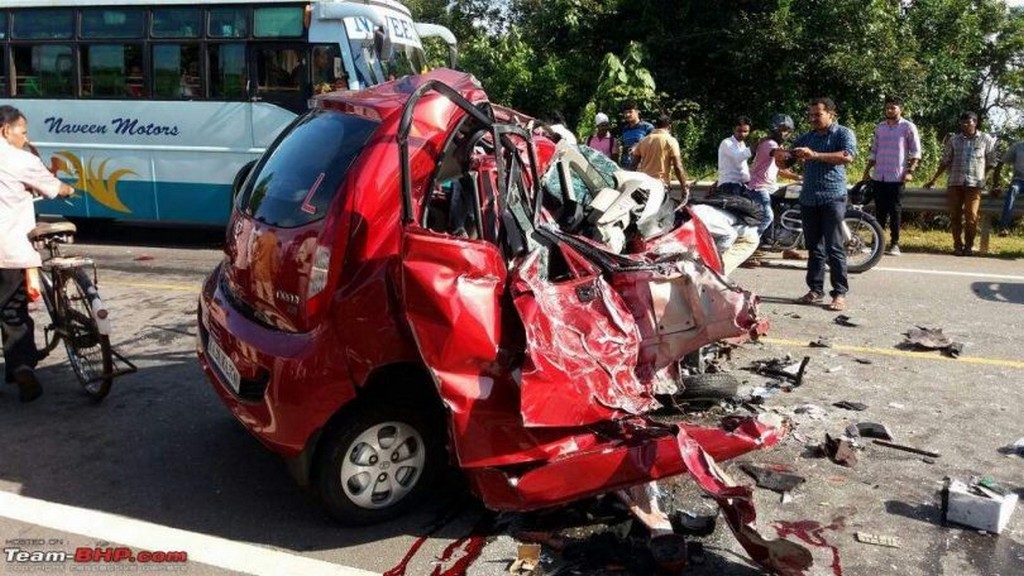 India has the worst rate of fatal road accidents and most of them are caused due to individual negligence, not obeying traffic rules, unawareness of driving rashly, improper implementation of mandatory regulations, etc. For those faint-hearted, we recommend not to witness this brutality of a fatal crash as a Tata Nano made a head-on impact with a loaded truck.

A mother and son were involved in the accident and the result was nothing but fatal. After picking up the new Nano vehicle from the servicing centre, the driver should have tried to overtake the vehicle ahead and got involved in the massive mess up as he collided with a loaded truck from the on-coming traffic. The loaded truck as can be seen in the picture endured little impact but the red colour Tata Nano was turned into scrap metal as the signs of the front and rear end were nowhere to be seen. It was crushed into literally nothing while the truck had damaged the lower left-hand side of the front portion.

While the truck driver fled from the accident scene, he later surrendered. The totalled Tata Nano had a L plate which pointed that the driver might not have had a license or that he was still new practicing driving and not good enough to be on highways. It was pretty sure from the accident scene that an overtaking maneuver had caused the wreckage but who was at fault was not known yet. Accidents on Indian roads have been increasing every day and it’s our duty to drive responsibly no matter which car we own or drive. Life once lost can never be retrieved and everyone should understand the importance of driving carefully and responsibly, otherwise, accidents like this cannot be avoided. According to government’s report, over 1,40,000 people were killed in road accidents last year, at an increase of 4.6 percent over 2014.