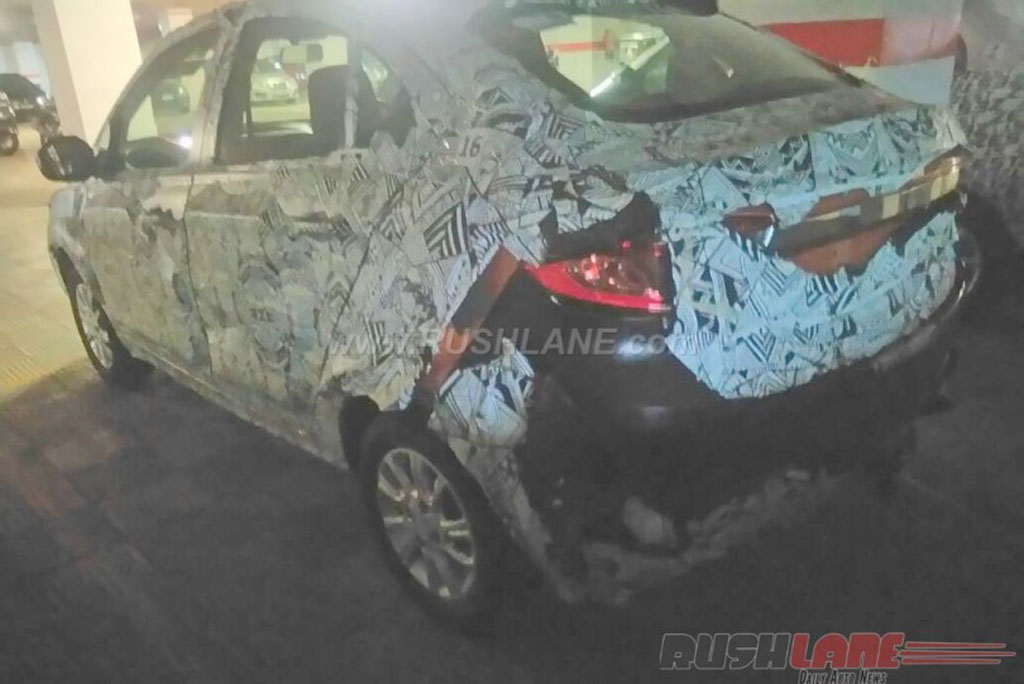 Tata Motors made quite a ripple in the Indian automotive arena with their next offering Kite 5 in the compact sedan segment. Alongside its compact hatchback sibling Tata Tiago, the Kite 5 grabbed everyone’s attention. The car comes designed based on Tata Motor’s new IMPACT design language. Rushlane posted images of a camouflaged Kite 5 of Orange coloured body and black bumper being tested. The car will hit the market sometime around the festive season this year, possibly in November, and before that Tata Motors is testing the car near their Pune plant.

The spyshots show the car in an all new Orange body colour and the bumpers are painted in black. This could be an entry level variant of Kite 5. Contradiction is that, the Kite 5 was wearing alloy wheels, which in case of its sibling Tata Tiago is offered only in top variants. The alloy wheels spotted in the Tata Kite 5 look similar to the Tata Tiago’s. The rear profile of the car sports a thick chrome bar running the width of the car between two taillamps. Interestingly, the chrome bar looks thicker and different compare to the model showcased at the Auto Expo 2016.

Tata Kite 5 compact sedan comes with sharp headlamps, and a piano black finished smiling grille with honeycomb design at the front fascia. The lower fascia gets a slated wide air intake with chrome garnished fog lamps at both sides. The side profile gets blackened glass area, sharp character lines running through the body, nice sloping roofline, wrap around sharp taillights. The interior gets a classy instrument cluster and a centre console.

Generating power for this car will be a 1.2 litre Revotron engine paired with a five speed manual transmission which will kick out around 85 PS of peak power and 114 Nm of peak torque. The diesel variant on the other hand will come with a 1.05 litre Revotorq engine mated to a five speed manual transmission generating 70 PS peak power and 140 Nm peak torque. An Amt might get introduced at later stage. These same engines and transmissions are on offer with Tata Tiago as well. The compact sedan will take on the popular models like Maruti Suzuki Swift Dzire, Honda Amaze, Hyundai Xcent and Ford Figo Aspire.