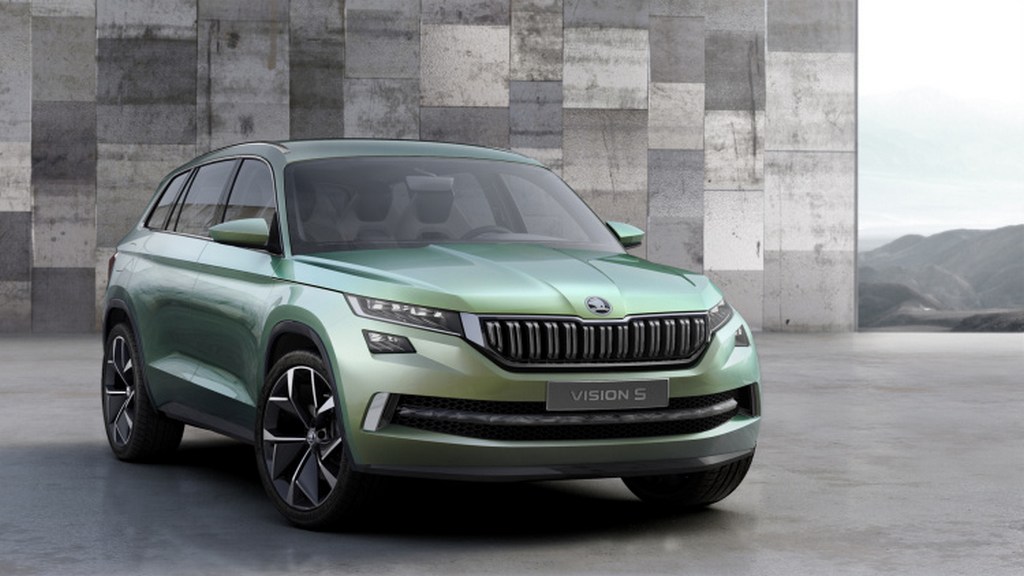 Skoda Vision S Concept made its first public appearance at the 2016 Geneva Motor Show. The Czech company is expanding its SUV range and the newest member of the family would be based on the Vision S concept car that could carry a nameplate ‘Kodiak’.

It measures 4.70 metres in length, 1.91 metres in width and 1.68 metres in height and the production version will be revealed at the 2016 Paris Motor Show in the coming October. The Vision S SUV concept had a wheelbase of 2.79 metres with generous amount of cabin space. On the outside, the concept boasted LED head lights divided into two units alongside a wide, trapezoid grille with vertical upright struts. It was bolted on a newly designed multi-spoke alloy wheels and comes equipped with a sleek LED tail-lamp cluster. At the rear, the exhaust pipes are elliptical in shape and the tail gates continue till the flat reflectors positioned within the bumper.

The Skoda Kodiak mid-size SUV will reach Indian shores in the latter parts of 2017 according to industry reports. It will be built on the highly flexible MQB platform that underpins the second generation Volkswagen Tiguan. It will cost less expensive than the Yeti crossover and the engines will be derived from the new Skoda Superb premium sedan, that’s been recently launched in India, with 1.8-litre TSI 16V DOHC four-pod petrol and 2.0-litre TDI CR 16V DOHC four-cylinder turbo diesel powertrains. The 2.0-litre diesel engine churns out 177 PS between 3,600 and 4,000 rpm and has a peak torque of 350 Nm between 1,500 and 3,500 rpm. The petrol engine coupled with a fully-synchronized six-speed manual or a seven-speed DSG automatic. The diesel motor sends power to all four wheels via six-speed DSG automatic with Tiptronic manual gear changing.