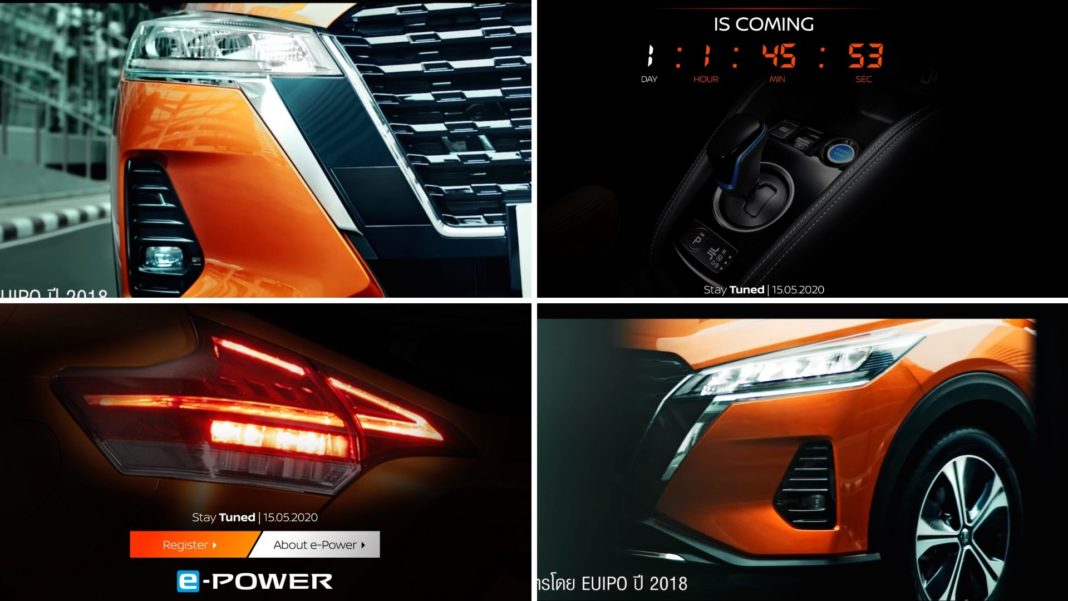 Nissan’s Thailand division will be commencing the production of e-Power technology based vehicles soon. In doing so, Thailand will become the first country to manufacture the electric drive system outside of Japan. The e-Power technology works in a way that the petrol engine is utilized to charge the batteries and thus reducing the range anxiety as well as the need to pull over for charging.

On May 15, the Japanese manufacturer has also confirmed debuting the e-Power technology equipped Kicks crossover. The 2020 Nissan Kicks e-Power will be unveiled in Thailand first before reaching other markets and it has also been teased. The invitational teaser showcases the hidden crossover with a lighting bar covering the side profile and running on the signature V-motion front grille.

While the design details could not be clearly seen, the leaked undisguised images indicate the presence of a heavily redesigned front fascia with sharper headlamps, bigger grille with glossy black trim, a newly designed front bumper, updated air intakes, new fog lamp assembly and premium chrome trim just below the headlamps and surrounding the grille.

Other design highlights include a new pair of alloy wheels, black pillars, enhanced bonnet and character lines, body coloured rear bumper, and sleeker LED tail lamps. These changes are now confirmed by the 15-second teaser video released by Nissan Thailand on YouTube. The electric variant of the Nissan Kicks is advertised as “A new thrill is coming”.

The e-Power range extender drive is a serial hybrid system and the wheels are always driven by an electric motor that draws its power directly from a large traction battery pack. But, it is supplied with energy by a combustion engine, which uniquely acts as a generator. The Sylphy sedan could also receive the technology to compete against Toyota Corolla Altis Hybrid.

Amidst rumours of Nissan considering e-Power technology for Europe, especially with the Qashqai SUV, the company was recently reported to stop sales in the Old Continent as part of a new strategy focussing on markets like China, Japan and the United States. However, Nissan dismissed the reports and said it is fully committed to the market.