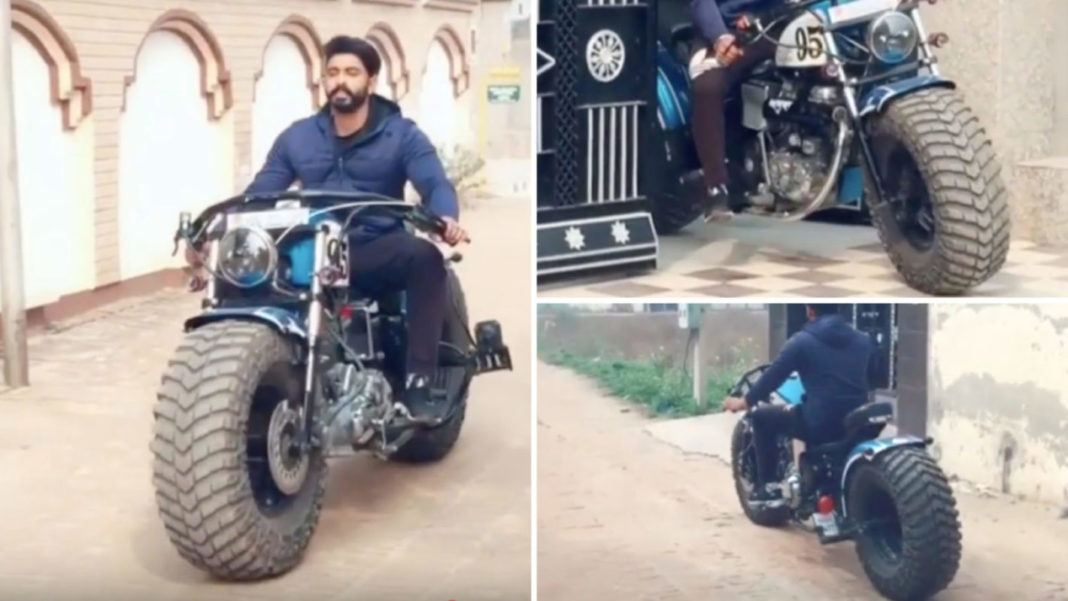 Royal Enfield Motorcycles have massive potential for modifications, which is why they are the most favoured choice of most modification garages in India. While many modified Royal Enfield bikes look stunning and there are a few others that can get look extremely wild. Here is one such Royal Enfield motorcycle seems bonkers.

Manan Gill, the owner of the bike, has customised it quite well, and it now can grab all kind of attention on the roads – good and bad. The Royal Enfield seen here gets tyres right from tractors. It has been modified to be used in a music video and but this bike also works perfectly, and one can take it out on the roads. But that does not makes it road-legal. The exact specification of the tyre is not known, but it is extremely wide.

The Royal Enfield Tractor bike gets a new custom-built front suspension that can hold the massive tyres. Other changes include a new LED projector headlamp unit at the front and a customised wide handlebar that looks quite good. Other changes include additional faux lamps mounted at the front of the bike, a custom chassis and a new customised seat.

Can you use such a motorcycle daily? Probably not. The extra-wide tractor tyres make the already massive Royal Enfiled much heavier. Also, the straight line stability will increase with the fatter and wider tyres, but it will be a nightmare to turn this bike on the regular roads, especially with traffic around.

Both Royal Enfield 350cc and 500cc engines generate quite a lot of torque needed to move such huge tyres along, but none of these engines has much power that can take the bikes to a higher speed.

This modification job is not a work of professionals and looks like a temporary work. Well, we are not sure how it feels to ride this mammoth motorcycle, but it does look attractive enough to turn a lot of heads on the roads.