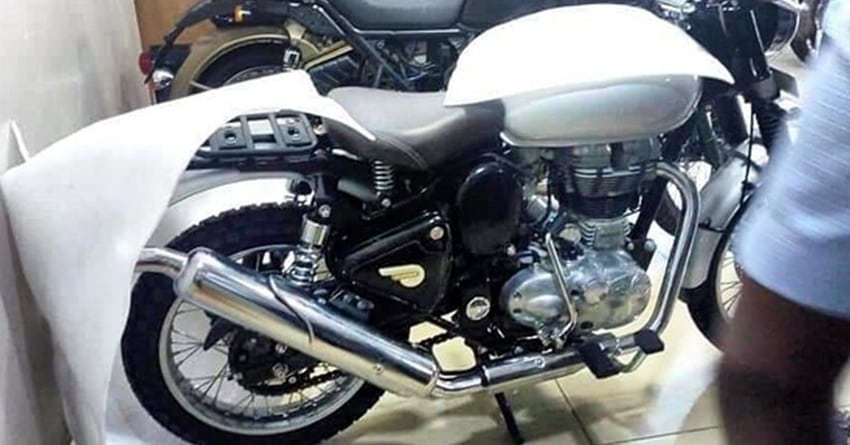 Royal Enfield is working on a new variant of the Classic 500 series and it will be a Scrambler model as the test mule was spotted for the first time earlier this month. According to a new report, the company is going to launch the Classic 500 Scrambler in March and deliveries will start in April. The Scrambler is expected to be priced slightly higher than Classic 500.

The Classic series is the best selling model of the company in India and the new model shares several components with the Classic 500 model. The fuel tank and side body panels on the test mule come straight from the current Classic 500 and we are expecting the round headlamps also to be retained on the Scrambler model.

But the riding position is completely different as Royal Enfield has given new wider handlebar and it is positioned upright as the foot pegs are forward positioned but this set up will give more control over the bike during off-road riding. The exhaust also gets a new design as the Scrambler test mule spotted only get rider seat.

Royal Enfield might offer the pillion seat as an option as the regular model will come with parcel rack. The rear has been completely redesigned with a new tail lamp and fender. The Classic 500 Scrambler comes with telescopic forks at the front and dual-gas charged suspension at the rear, which will be tuned for comfort.

The instrument cluster might be the same unit from the current Classic 500 as the minimalistic approach is popular among customers. The Classic 500 Scrambler will be powered by same 499 cc single cylinder engine producing 27.2 bhp of power at 5,250 rpm and 41.3 Nm of torque at 4,000 rpm, mated to a 5-speed gearbox.

The brake is also expected to come from current Classic 500 as the front gets 280 mm disc and 240 mm disc at the rear. Royal Enfield will offer dual-channel ABS as standard. The test mule spotted come with spoke wheels and off-road spec Knobby tyres. The company might also introduce some new colour options with the Classic 500 Scrambler.