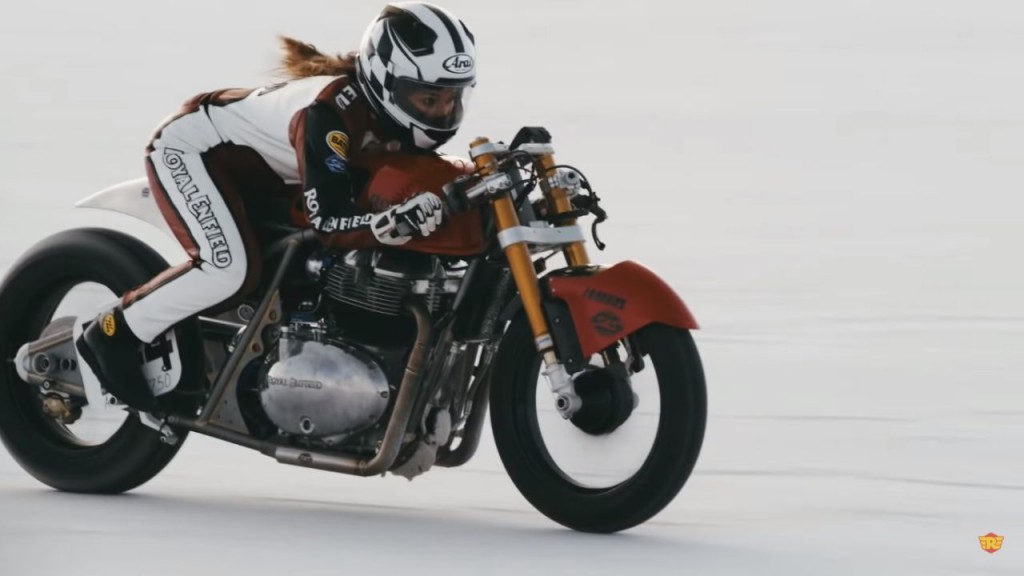 Royal Enfield is going to launch the much awaited 650 Twins in India later this year. Ahead of its debut, the company has attempted a speed record at Bonneville Salts Flats with one-off modified Continental GT 650. It comes with lots more changes compared to the stock model. Earlier, RE showcased a customized version of Continental GT 650 for drag races.

The speed record attempt GT 650 comes with low ground clearance and a longer wheelbase. The company has also removed all excessive body parts and front gets upside down forks instead of regular telescopic suspension. The handlebar is placed lower and foot pegs are rear set as this riding position is for reducing drag.

Royal Enfield has also given smaller wheel at the front and rear get a bigger wheel. The company has made so many changes to engine and the power output of this speed monster is not yet revealed. The frame and other mechanical parts also get major changes as everything needs to be sharp because of the speeds they are doing.

The customized Continental GT 650 was ridden by Cayla Rivas and they have done several test runs on the salts. The maximum speed they could achieve was 241 kmph and the official run is expected to take place next month. We can expect Royal Enfield to make some changes and top speed will be higher than test runs and it could change over the course of next runs during the rest of the week.

The stock Continental GT 650 is powered by new 648 cc parallel twin cylinder, fuel injected engine producing 47 bhp of power at 7,100 rpm and 52 Nm of torque at 5,200 rpm. This engine is mated to a 6-speed gearbox and it will be tuned for long distance touring. The power delivery will be linear, but the 650 Twins will be nimble around the city.

The braking power comes from 320 mm single disc at front and 240 mm at the rear. The company has also given dual channel ABS system from Bosch as standard. The 650 Twins comes with telescopic front suspension and gas charged shock absorber at the rear. Royal Enfield is expected to price 650 Twins around Rs. 3 lakh.