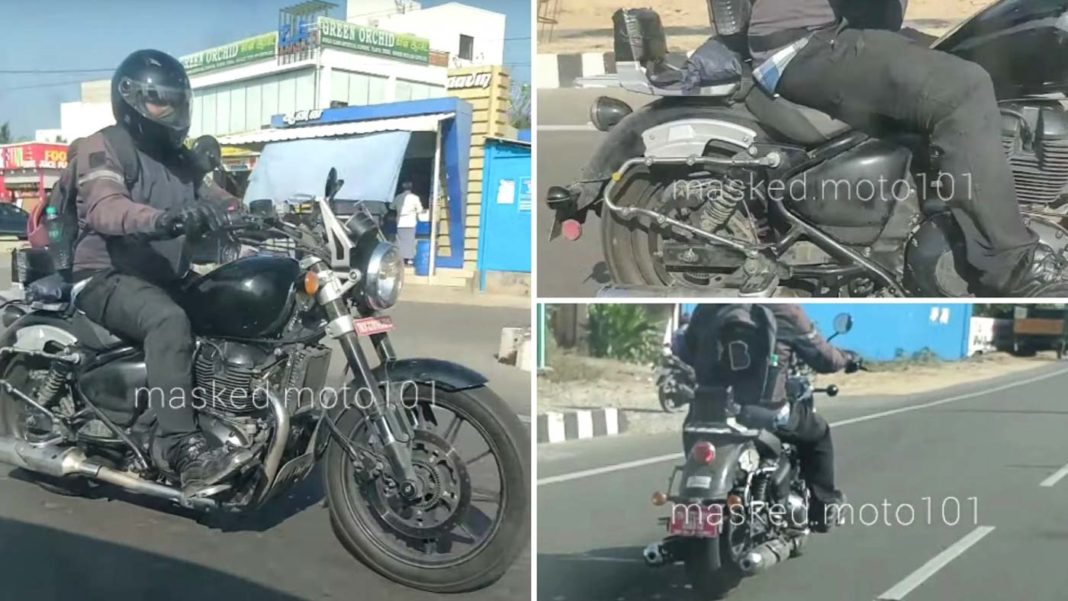 Royal Enfield is certainly working on a cruiser based on the highly accomplished 650 cc platform that spawned the Interceptor 650 and Continental GT 650 in late 2018. In October last year, the first clear spy shots of the 650 Cruiser emerged on the internet and in January 2021, we showed you another test mule of a new 650 cc motorcycle that can be categorised as a different variant of the cruiser.

It carried an upright riding stance, not-so-raked USD forks, an exposed rear end, different metal tubing and middle set footpegs giving a roadster appeal. However, the new set of spy pictures is of the previous prototype that can be classified as a cruiser. It shows the presence of relaxed forward set footpegs and a low riding stance for the rider courtesy of the tall handlebar positioning.

The first-for-RE upside-down forks are heavily raked and the rear also gets more angled twin shock absorbers. The round-shaped headlamp could get an integrated LED DRL in the production-ready version and the test mule does not appear to be in its close-to-production state yet. We could also notice black alloy wheels and chunky rear fender covering the fat tyres. 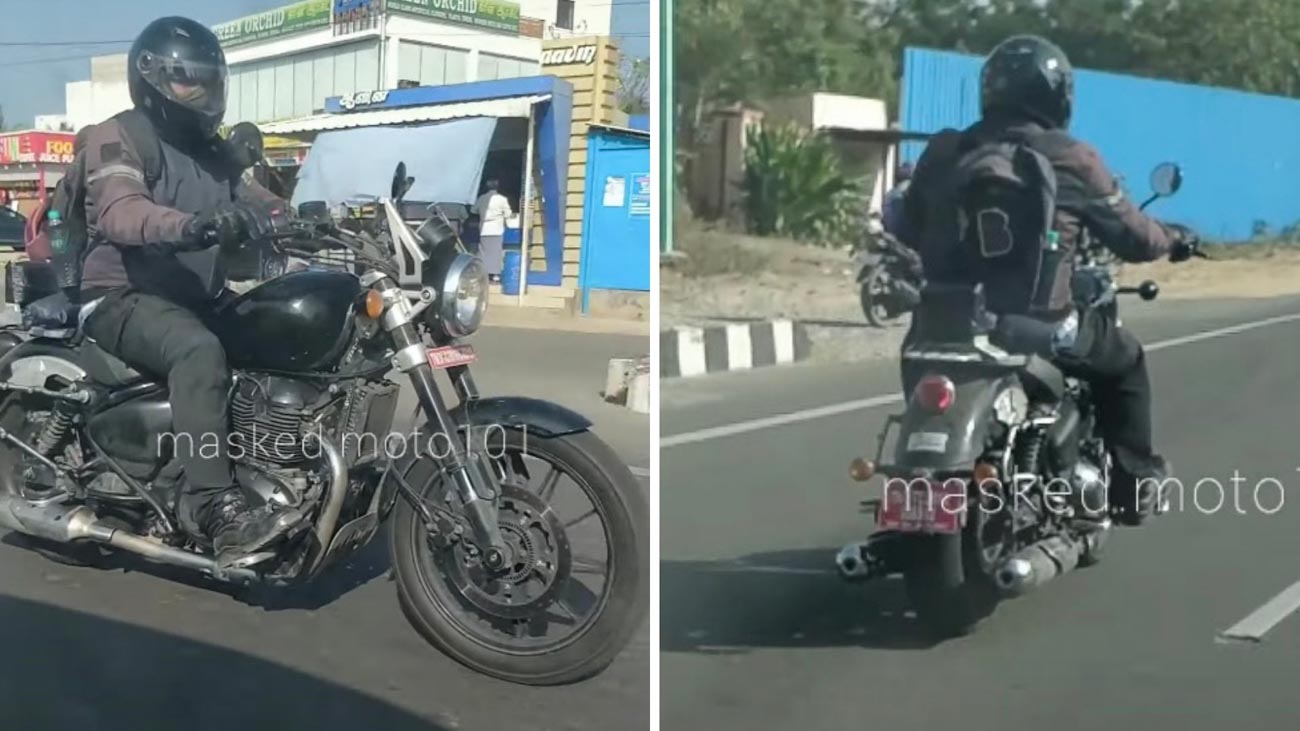 Other notable elements in the Royal Enfield 650 Cruiser are split seats with wide proportions, pillion backrest, a prominent grab handle, circular LED tail lamps with turn indicators mounted on the fender and front turn signals on the fork element. It will likely have a similar switchgear layout as the 650 Twins and a separate pod for the Tripper Navigation system could also be incorporated.

The semi-digital instrument console will be available as does the dual chrome exhaust system. As for the performance, the same 648 cc parallel twin-cylinder fuel-injected DOHC engine with 270-degree firing order will be present, producing a maximum power output of 47 PS and 52 Nm of peak torque. 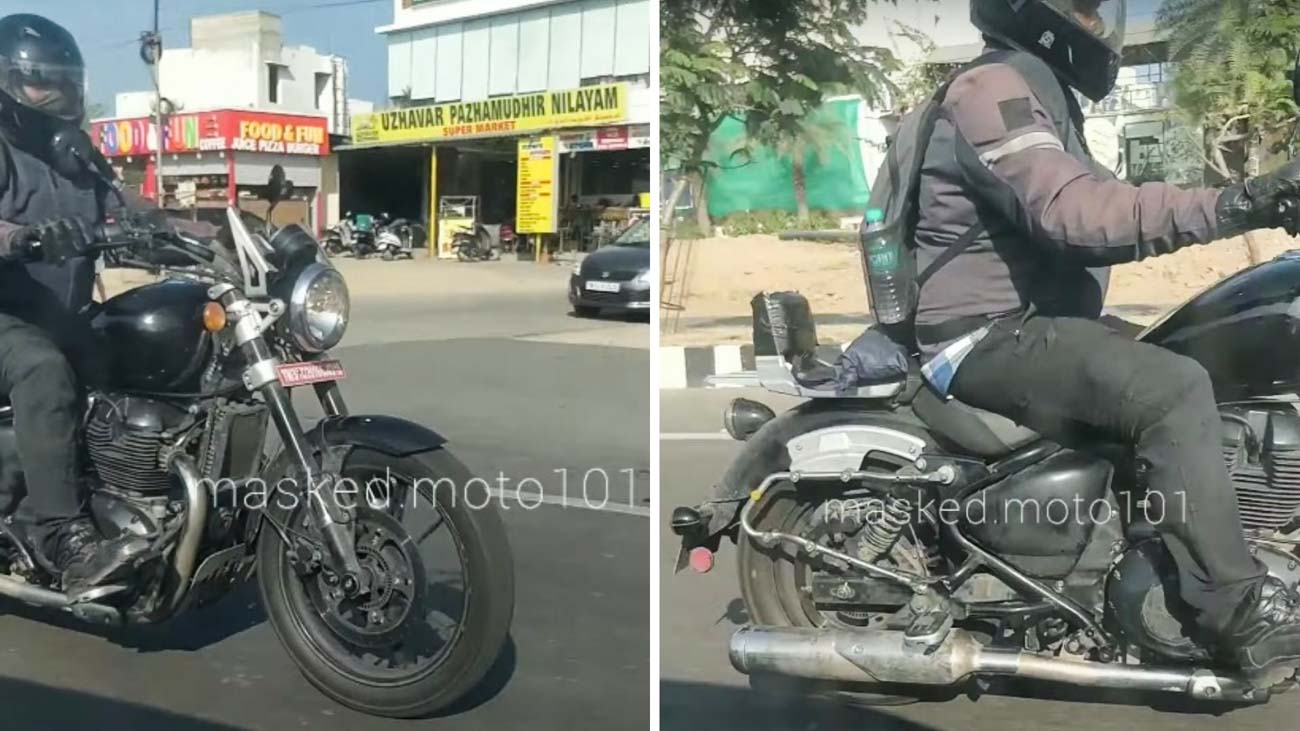 The engine will be paired with a six-speed transmission with a slipper clutch as standard. Royal Enfield will also offer a dual-channel ABS system with likely similar front and rear disc sizes as the Interceptor and Conti. The 650 Cruiser is expected to go on sale later this year.