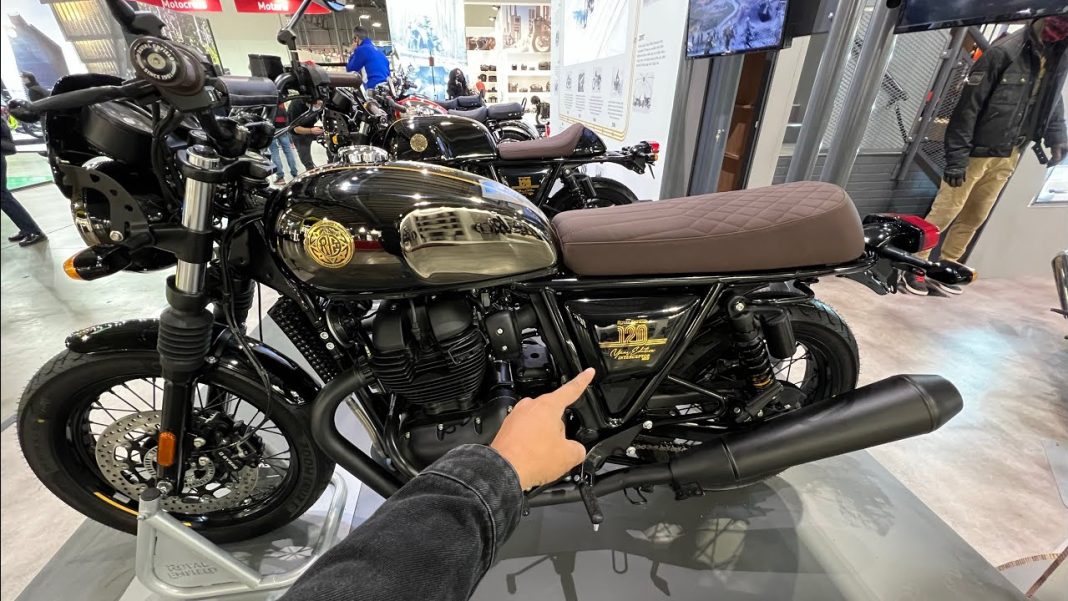 Royal Enfield has made its presence felt at the 2021 EICMA in Milan, Italy by unveiling the Shot Gun 650 Twin concept and the 120th Year Anniversary Edition of the 650 Twins. The latter celebrates the Chennai-based manufacturer’s existence for twelve decades and to maintain its exclusivity, only 480 units will be sold across the globe.

The company has allotted 120 units (60 units of Interceptor 650 and 60 units of Continental GT 650) for India while Europe, Americans and Southeast Asia get 120 units each. The video attached below shows a detailed walkaround of the Royal Enfield 120th Year Anniversary Edition and it will be available to buy online on December 6, 2021, in India.

The registrations have begun at Royal Enfield’s official website as interested customers can register and participate. At the Stanley Cycle Show in London back in November 1901, Royal Enfield launched its first motorcycle and the limited Anniversary Edition celebrates the 120-year journey and it gets a host of changes to differentiate itself from the standard 650 Twins.

It gets a black-chrome tank colour scheme developed in-house with Royal Enfield’s chroming technology at the production plant in Thiruvottiyur, Chennai. The special edition is chromed with an eco-friendly process and is complemented by the blacked-out engine, silencer and other elements. It also gains a range of accessories such as flyscreens, engine guards, heel guards, touring and bar end mirrors in black colour.

The 120th Year Anniversary edition boasts handcrafted die-cast brass tank badges developed in association with the ‘Sirpi Senthil’ family. Other highlights are Royal Enfield’s hand-painted pinstripes, tank top badge featuring the unique serial number of each motorcycle between 1 and 60, a side panel decal that is a special ode to Royal Enfield’s 120 years and so on.

With no mechanical changes, the special edition is powered by the same 648 cc parallel-twin fuel-injected engine kicking out 47 PS maximum power and 52 Nm of peak torque. It is paired with a six-speed transmission with a slipper/assist clutch as standard. The motorcycle also features a dual-channel ABS system, twin-pod instrument console and spoked wheels at the front and rear.