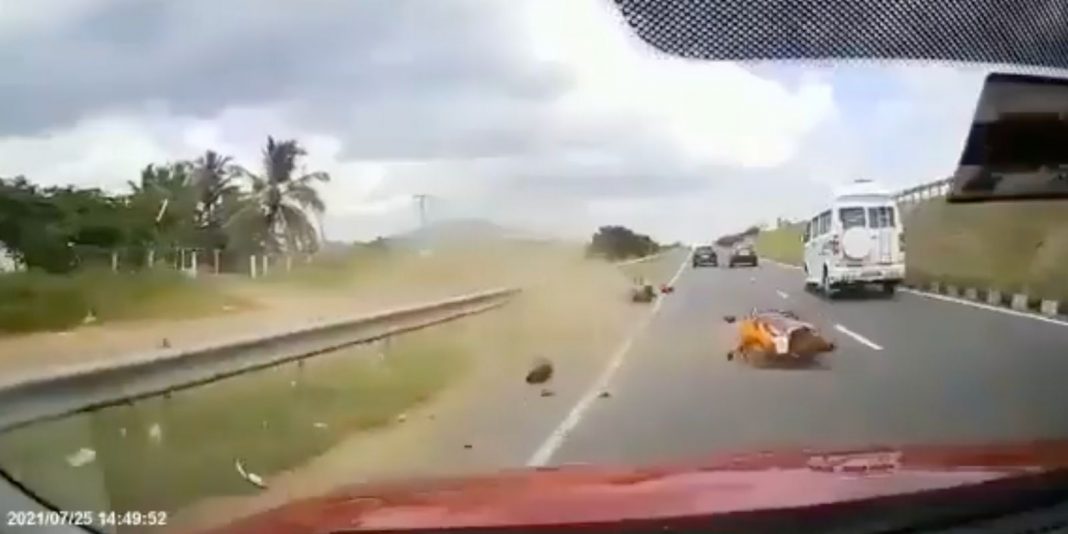 We often come across scary accidents on the internet and in most cases, they are caused due to negligence or downright arrogance. Here is one such incident that sends shockwaves and resentment to the viewers and there’s no doubt that the offenders should be punished. The accident happened on the notorious Salem-Coimbatore highway in Tamil Nadu at 2:30 pm on July 25.

The accident that occurred within the Magudamchavadi police station limits was caught on the onboard camera of a car and it saw two men travelling on a scooter were thrown off as the driver of the Hyundai Creta tried to do an ambitious overtake at high speeds before retreating and bumping the two-wheeler. The worse thing was he just did not care and left the scene without any remorse.

The driver was caught by police on Monday night as an FIR (First Information Report) report was filed on the same day of the accident under Sections 279 (rash driving on a public way) and 337 (act done to endanger human life) of the Indian Penal Code.

The accused were returning from a temple known for people visiting to pray and end their drinking problems and many would drink and head to that place before taking a vow to give in on the habit. Sounds quite weird? More sections would be added to the FIR as the driver was found to be drunk on the way back.

The driver from Perambalur was certainly on the limit and out of control before ramming onto the two men. The dashboard footage showed the innocent men thrown off the bike and on the air as Ajith and Arun sustained multiple injuries but as soon as the black Creta driver fled, the moment of one trying to help the other but to no avail, as he was not moving was quite disturbing.

Both are being attended at a hospital as the rider sustained only mild injuries but the pillion is in ventilator support due to severe head injury. The accused driver was caught by police and three other men who travelled with him were put under custody following a local submitting the on-board footage from the car behind him and it helped in tracing the offenders.