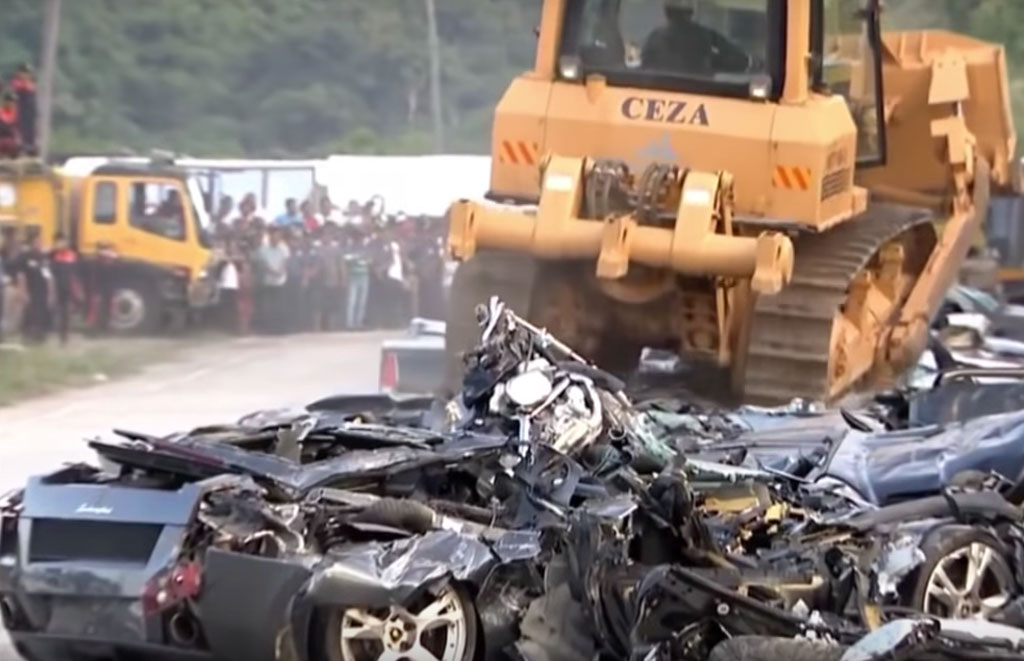 Lambos, Porsches, Mustangs and eight motorcycles reported worth 298 million Piso were brutally destroyed as they were illegally imported

What is more painful than seeing a car getting crushed? I honestly do not think of anything else but a prolific figure seems to have enjoyed it a whole lot. Rodrigo Duterte, President of Philippines, has been responsible for the destruction of over 75 luxury cars and bikes brought into the country illegally.

The smuggled vehicles seized by customs department include supercars as Lambos, Porsches, Mustangs and eight motorcycles reported worth 298 million Piso (Rs. 38.47 crore approx) were brutally destroyed. I am sure you would be thinking what I am thinking right now; why not bring them under auction instead of totalling them right?

Perhaps that seemed complicated for Mr. President, as they were property of someone else. He did not just watch on, however, as he cheered the bulldozers crushing the vehicles at Sta Ana, Cagayan in northern Philippines. He made a statement before the incident and said of eradicating smuggling and corruption in the country.

And crushing illegally imported cars and bikes is just part of his government’s plans. By doing this, he wants to show Philippines is a “viable place of investment and business”. Wonder how any of that makes sense? Well, Duterte is known for doing similar activities in the past and crushing illegal luxury vehicles have always been something he liked to do.

Back in February 2018, he ordered destruction of several sports cars and luxury vehicles including Corvette Stingray, Jaguars and BMWs at the Capital city of Manila. According to the government, the Philippines Bureau of Customs seized last year accounts to over £2.11million (nearly Rs. 19 crore).

Normally, smuggled vehicles will have to be impounded and go under the hammer but the controversial Duterte has other ideas and considers the government profit from such auctions a crime.