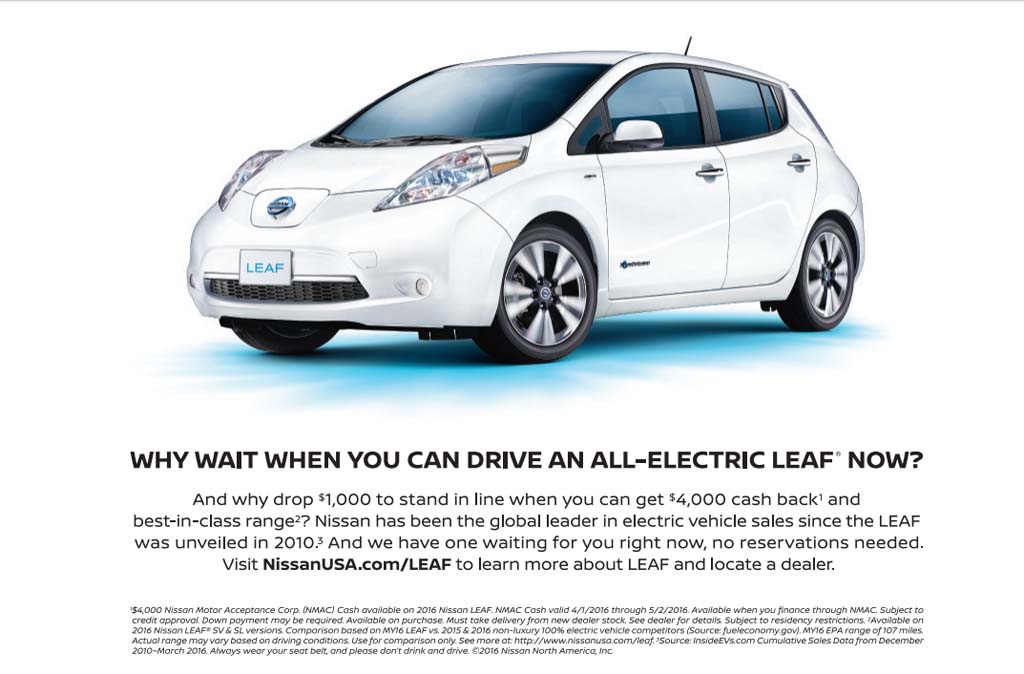 Tesla stirred quite a ripple in the automotive world with its latest electric car Model 3, which the American automaker unveiled few days ago. The Tesla Model 3 has already garnered nearly 4 lakh bookings prior to its launch in 2017. Now, as it seems, Japanese automaker Nissan has turned Tesla Model 3’s popularity a point for its own advertisement. Yes, Nissan has mocked the Tesla Model 3 with its own Nissan Leaf compact hatchback which is a fully electric car.

The Japanese automaker has been one of the largest automaker when it comes to making electric vehicles. The company has published an advertisement; which says, “Why wait when you can drive an all electric Leaf now?” The advertisement also says, “Why drop $1000 to stand in line when you can get $4000 cash back and best in class range?” Well, the thing is that, Nissan Leaf is already on sell, while the prospective buyers of Tesla Model 3 have to wait till 2017, as the electric sedan is expected to hit the showrooms in 2017 only. The customers can book the Tesla Model 3 for an amount of $1000, while the car will cost a total of nearly $35000. On the other hand, the entry level Nissan Leaf comes with a price tag of $29010. So, the Japanese automaker just tried to turn these two points in its favor.