The return of all-new Santro has created quite a ripple in the Indian market. The all-new Santro brings back the tallboy design with modern design and features. In the meantime, Maruti Suzuki India is also working on the all-new WagonR and it will be launched on 23rd January 2019.

The all-new Santro is based on the heavily modified platform of the discontinued i10 and the body shell design is quite similar to the i10 too. But Hyundai has designed the vehicle from ground’s up and has made enough changes in the vehicle to give it a new identity. The all-new Santro carries the signature Hyundai family design with a big, trapezoidal grille at the front. 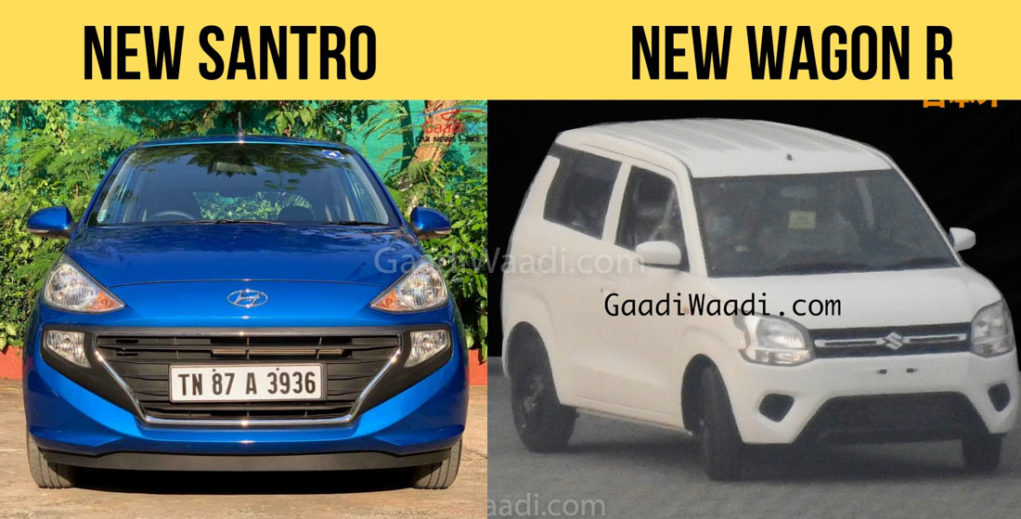 It gets large foglamps embedded into the black cladding giving it a wide look. It also gets a straight window line, which ensures that the rear passengers get to use the large windows and do not feel claustrophobic. Even though the all-new Santro is quite high, the overall design hides the fact well and ensures that the overall body design looks proportionate.

The all-new Maruti Suzuki WagonR that will be launched in India has been revealed by us completely and it looks very different from the WagonR available in the Japanese market. The leaked pictures reveal its boxy design with straight line body. It gets a simple looking, single-slat grille at the front with uniquely shaped headlamps. The C-Pillar gets a black element, that gives the roof a floating effect. It also gets tall tail lamps mounted on the C-Pillar, which quite look like the signature Volvo tail lamps.

Both the vehicles have their distinctive characteristics when it comes to design and have set their own standards in the market.

The Hyundai cars have always been known for their feature-rich cabins and the Hyundai Santro is no different. The Santro gets a dual-tone dashboard with black and silver and there is a special edition colour, which gets green highlights in the cabin. The cabin looks quite modern and gets big aircon vents.

The dashboard remains clutter-free and it gets power window buttons mounted in the middle of the front two seats. The Hyundai Santro also gets a 7-inch touchscreen infotainment system with Android Auto and Apple CarPlay. The Santro also gets a small LCD on the driver console that displays various information. Other features include steering mounted control, standard driver-side airbag and ABS with EBD. The top-end version gets dual airbags.

The current generation of the WagonR is pretty dry in terms of the features. But the all-new WagonR is expected to get a long list of features. There would be standard driver-side airbag with ABS+EBD. The all-new WagonR will also get a touchscreen infotainment system to keep up with the competition. The dashboard can be dual-tone for the premium feel too. However, there is no way to know what the all-new WagonR would offer on the inside.

The all-new Santro is available with only a single engine option in the market. It gets a 1.1-litre, four-cylinder engine that churns out a maximum power of 69 Bhp and 99 Nm. It gets petrol and CNG fuel option. For the first time ever, Hyundai is offering AMT automatic transmission with the all-new Santro and the manufacturer has announced that they have received an extremely good response for the automatic variants.

Maruti Suzuki has not announced any engine details for the upcoming WagonR but it is likely to carry forward the same 1.1-litre, three-cylinder engine from the current-generation product. It currently develops 67 Bhp and 90 Nm and is expected to offer same power and torque figures. The all-new WagonR will also offer CNG variants and AMT automatic transmission.

Advantages of Maruti Suzuki WagonR over the Hyundai Santro

Both the cars are matched extremely well when it comes to the features but the Maruti Suzuki WagonR is expected to offer roomier cabin, which it always has. Also, it will offer a higher fuel efficiency than the Hyundai Santro in the segment.