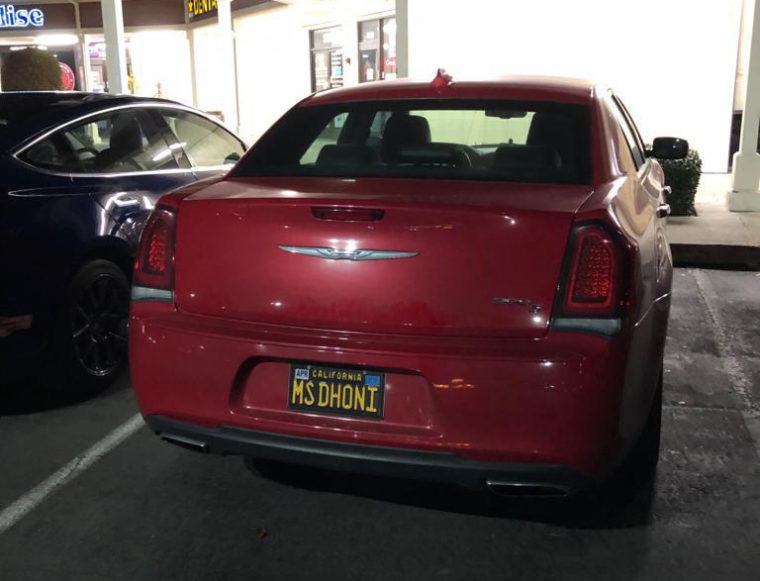 Customised numberplates are not available in India. However, in developed countries like USA, people can choose their own numbers for the registration plate

There are cricket fans all over the world including the nations where cricket is not so popular. And of course, fans show their love and respect for different teams and players in various ways. Here is one such grand gesture from a fan living in California, USA.

The car was spotted parked in California and someone took a picture to post it on Twitter. It is a Chrysler 300 and gets a custom “MS DHONI” numberplate. It is not unusual to spot customised numberplates in the United States where the law allows people to choose their own customised registration plate at a premium price. However, spotting a MS DHONI inscribed plate is little unusual as the country’s sports interest lies somewhere else and not cricket.

It is quite possible that an Indian-origin person, living in the USA chose the customised numberplate. It is also possible that MS Dhoni has a USA-origin fan who did that. We are not sure who this Chrysler 300 belongs too but it is quite fascinating to spot such things.

MS Dhoni is known around the world for his exemplary captaining skills and his signature shots while batting. He has even played cricket in the USA soil. Back home, the ex-captain of India is known for his love for cars and motorcycles.

MS Dhoni has a huge collection of motorcycles including the retro Yamaha RD 350, Yamaha RX 100, Yezdi, Royal Enfield to modern sports bikes like the Confederate Hellcat, Kawasaki Ninja H2, Yamaha R1 and more. He is known to service his own motorcycles and has been spotted cleaning his beloved RD 350 at his home in Ranchi, Jharkhand.

Dhoni also owns a range of SUVs including the Hummer H2, a modified Mahindra Scorpio, Land Rover Discovery Sport among others. We do not know if Mahendra Singh Dhoni has spotted this picture yet but we sure he will be jubilant to see fans around the corners of the planet.