MG Motor India has big plans for the domestic market and its first vehicle is due on June 24. The Hector is based on the Baojun 530 which in turn made way for the Chevy Captiva and Wuling Almaz in the international markets. MG has invested Rs. 2,300 crore in its first phase in India and it produces the Hector at its ex-GM Halol plant in Gujarat with high localisation.

The premium SUV enters a highly competitive segment with plenty to offer as it will play a significant role in setting up the brand image for the nearly 100-year-old company, which will begin operations with 120 touch points across the country.

The Hector will compete against Hyundai Creta, Tata Harrier, Nissan Kicks and the upcoming Kia Seltos. It is debuting in India with huge anticipation and our first drive review explains to you what the SUV is all about and whether it can be a game changer or not. 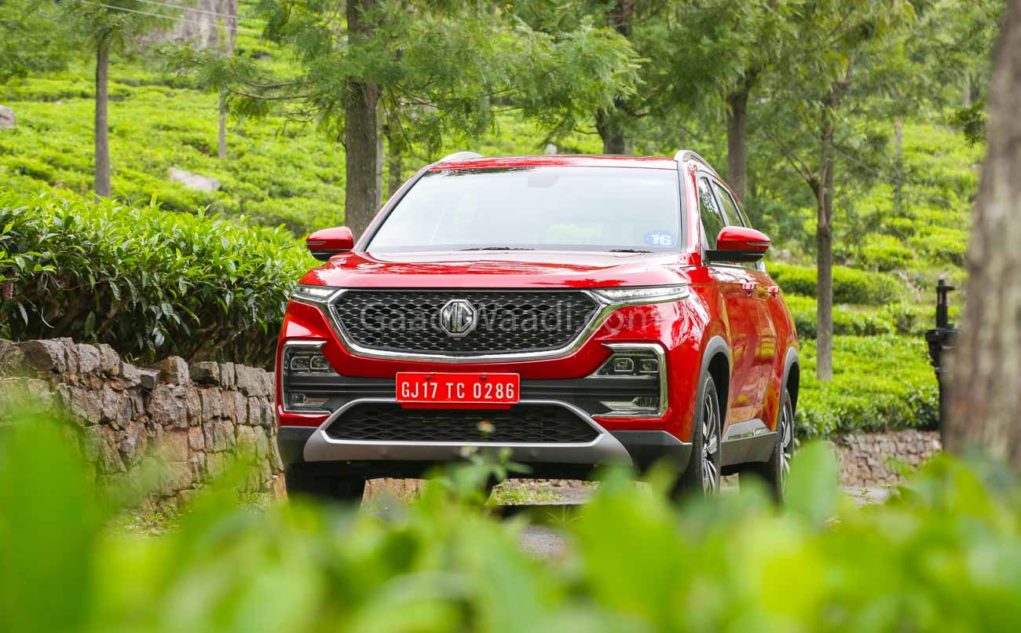 The Hector does have a large footprint courtesy of the Chinese SUV it is based on and the overall silhouette makes you think that it is more of a family focussed vehicle than anything else. The tall pillars and the generously extended side profile emphasise the practicality of the SUV but they do get in the way of being impressively aesthetic.

The Hector carries its boxy proportions all throughout as the imposing front end has black honeycomb grille with chrome highlights and the big MG badge sits in the middle. The sleek LED headlamp assembly in the top end variants is complemented by the beautifully looking LED Daytime Running Lights and fog lamps positioned in the rather sporty bumper with chrome enclosures. 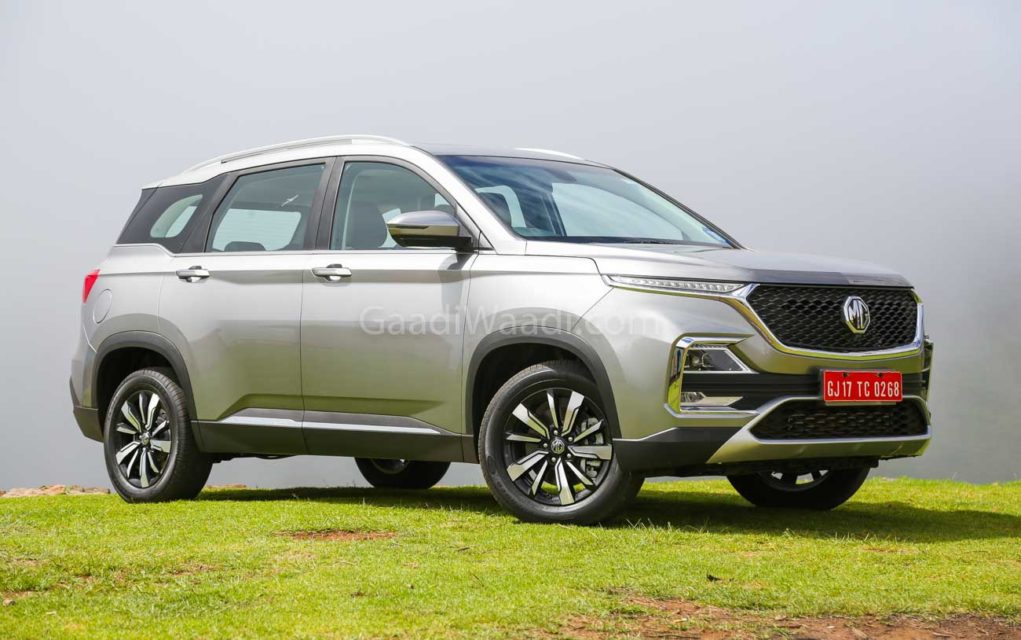 The rear end possesses wraparound LED tail lamps with LED turn signals having Audi inspired signature while a chrome and red strip run through the centre. The rear bumper section has a normal exhaust and a fake exhaust tip. With generous proportions, the Hector feels a lot plush on the outside but the styling is more angled towards family audience than anybody else.

The Hector has the longest wheelbase in its segment and is also longer and taller than most of its rival but the width of 1,835 mm blatantly shows the tall stature of the SUV. The British manufacturer has made sure the cabin is well made to sync with the upscale nature of the Hector as well as the brand in more ways than one. Stepping inside, you will have to pull the heavy doors and be treated with a neatly finished dashboard and centre console.

As most of the operations are carried by the segment-biggest 10.4-inch touchscreen infotainment system, the lack of physical buttons give a refreshing feel to the driver and occupants. The use of soft-touch materials and the associated stitches ensure the interior has a dark theme but the quality of the plastics and the touch-and-feel of some elements like the power window switches could have been improved. 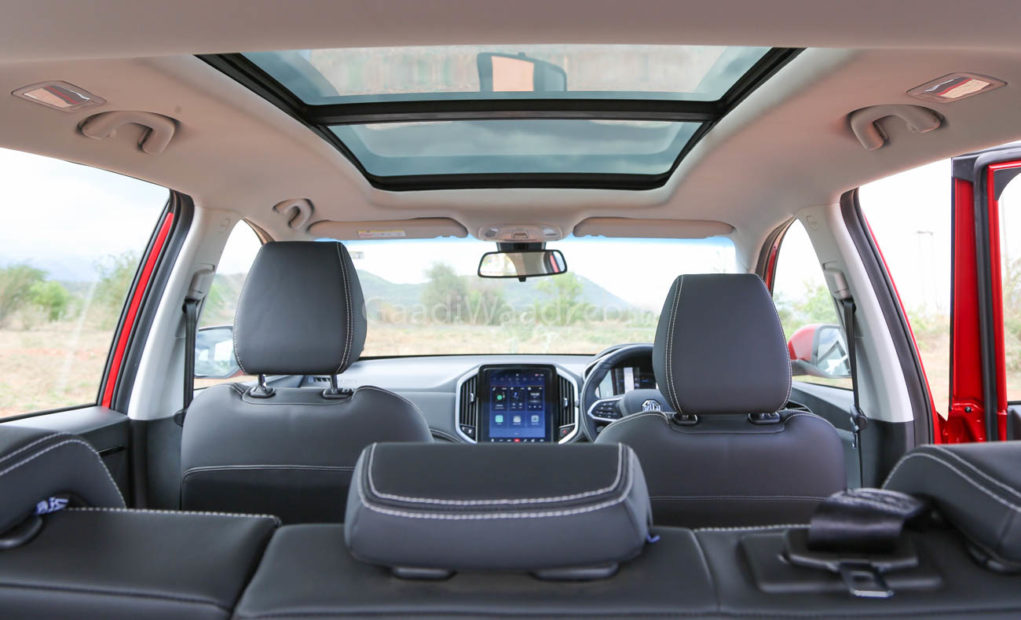 It can do operations that make things easier for the owner to live with the Hector amidst performing tasks that ensure safety of the SUV. The app enhances the ownership experience in a big way as it keeps tab of the Hector from how the driver manoeuvres the Hector and recommending solutions.

The different ambient mood light settings are welcoming while the pre-installed apps like Gaana with pre-downloaded audio and video as well as TomTom navigation, which took us on a route far too long while coming back to the hotel in Coimbatore from Kodanad, can do their duties with ease.

The touch sensitivity of the HD screen should improve overtime for availing better responsiveness. The voice assistant will find it hard to recognise the voice when the sunroof is opened on a windy day and since MG promises eventual over-the-air updates for its built-in technologies, we hope its ability to respond quickly will improve. The output quality of the 360-degree camera has to improve though. The nearly 600 litres of bootspace without folding the rear seat can carry all your regular and weekend stuffs around. Since the centre console sits a lot deeper, the front armrest was a bit of a hassle to rest the left arm and I had to put it up through the drive.

Here is the most interesting part of this high kerb weight and tall SUV. The Hector derives power from a 1.5-litre turbocharged petrol engine developing 143 PS and 250 Nm and the 2.0-litre four-cylinder diesel engine kicking out 170 PS and 350 Nm.

Our morning began with the petrol motor as we drove through the narrow roads of Coimbatore’s outskirts before hitting the crowded sub-urb of Mettupalayam and on to the Kodanad viewpoint through the scenic and rather less traffic strewn Kotagiri road giving us a good taste of what was in store in different scenarios. On the way down, we took charge of the FCA-sourced diesel powertrain. 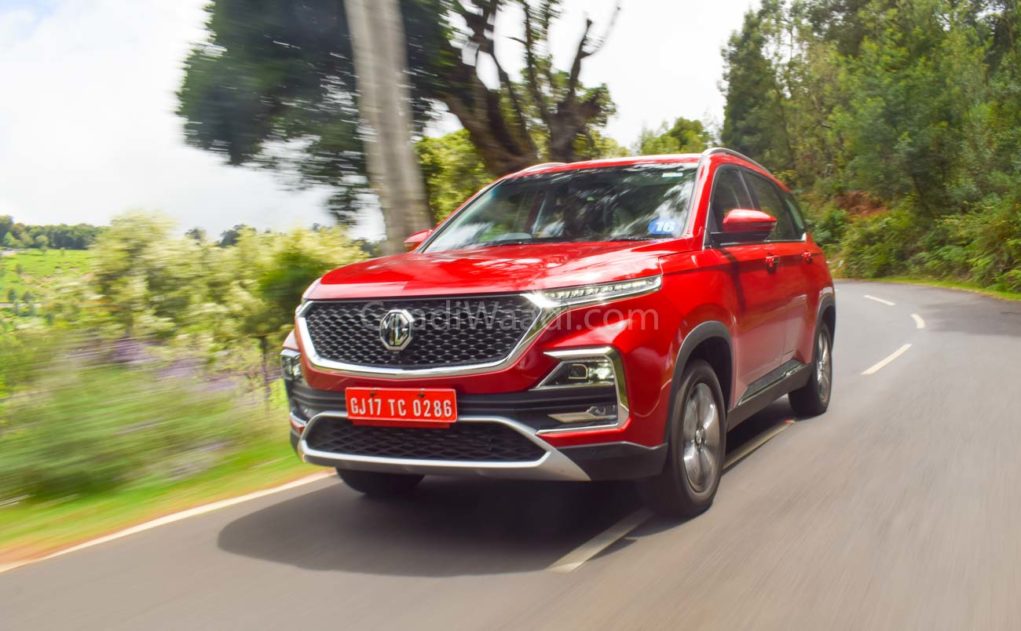 Simply put it, the petrol engine does lack the oomph factor when on cruising speeds but if pushed to 80 kmpl and above, it does come alive and you will get engaged in the drive. The turbo motor is not well refined and its kerb weight close to 1.7 ton does eat into the driving dynamics.

Since the turbo doesn’t kick in early, you will be in a position to push the SUV to get the best out of it. This is where the good visibility all around, especially for the driver, comes into play. The steering wheel is light to a point of giving only decent feedback but the more powerful and torquier diesel powertrain nullifies some of the issues encountered in the petrol. I found my foot getting stuck in the floor mat while dipping the clutch and the pedals themselves felt a bit narrow for me. The driver’s cockpit is spacious but the seats could have been wider on the front as well as rear to improve the comfort factor as the shoulder room was lesser to my liking.

The smooth six-speed transmission in the petrol variant of the five-seater makes a big shift on the wrong side in the diesel version mainly on the top end gear ratios. The oil-burner, in contrast, is easily the best motor available as it pumps out ample power and torque to offset some of the negatives of the petrol model. The same diesel engine seen on the Compass and Harrier responds to immediate throttle with good torque delivery even in the lower rpm band and through the corners, it feels more civilised as well. The ground clearance of less than 200 mm is not ideal for an SUV of its proportions when taken mild off-roading.

Which is the better engine?

The diesel engine outshines the petrol in more ways than one as it’s more responsive to driver inputs and boasts amble performance but the gearbox gives a hard workout. It is better for long journeys as well but the biggest disadvantage of the Hector has to be the slightly unsorted chassis and the resultant body roll alleviated by the high kerb weight. The body roll makes the Hector tiring and less engaging to drive. The light steering wheel, although slightly better on the diesel, could have been improved. The suspension setup is definitely on the softer side making even the little bumps and undulations were felt on your back and it gets more discomforting when the SUV is taken off the road. First thing is first, the MG Hector will appeal to a lot of audiences as it will likely be priced competitively between Rs. 12 lakh and Rs. 17 lakh (ex-showroom). The biggest plus on the premium SUV is its packed features list as the iSmart app integrated 10.4-inch touchscreen infotainment system ticks the right boxes on the entertainment and convenience side.

Additionally, the generous space featured inside the cabin will attract the family crowd. However, the less steering feedback and excessive bodyroll coupled with softer suspension won’t render an enthusiastic feel to the SUV. Can it make a big impact in the segment? We do think it will appeal to potential consumers but as for the consistency of the sales, we will have to patiently wait and see!