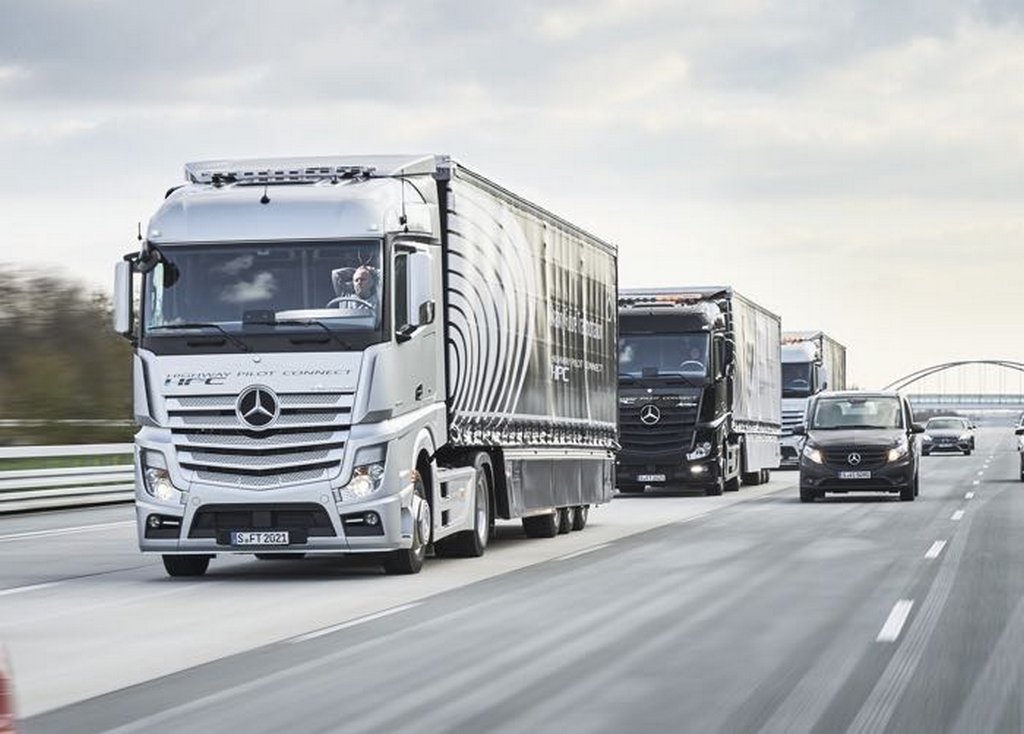 German automaker Mercedes Benz has tested a connected convoy of three autonomous Actros trucks in a cross border journey from Germany to Netherlands, which was a part of European Truck Platooning Challenge. The Netherlands government initiated the European Truck Platooning Challenge in an attempt to voice the benefits of truck platooning and the necessity of more convenient cross border rules which will allow more efficient road transports.

All these three Mercedes Benz Actros autonomous trucks were connected via Wi-Fi through Daimler’s Highway Pilot Connect system, which enables them to stay connected with each other electronically. This system allows a distance of only 15 meters between the vehicles. In this process the aerodynamic drag will be much less for the vehicles than a single vehicles face.

Only the leading vehicles will face the aerodynamic drag completely, while the vehicles behind it will face lesser drag. Therefore a large amount of fuel can be saved with this system, and it will eventually reduce the CO2 emission by up to 10 per cent, which will also reduce the transportation cost thereafter. In an emergency scenario the Highway Pilot Connected system will send braking signals to the autonomous vehicles in less than 0.1 seconds. Incidentally, a vehicle operated by a human behind the steering takes around 1.4 seconds to do the same in an emergency scenario.

Mercedes Benz Actros is a range of heavy duty trucks by the German automaker which was first launched in 1995. These ranges of trucks are widely used in Europe for purposes like long distance haulage, heavy duty distribution haulage and construction haulage. The weighs for the Actros truck range starts from 18 tonnes and these trucks are powered by either V6 or V8 diesel engines with turbocharger and intercooler. In 2002 Daimler Trucks launched the second generation of the Actors, while the third generation was launched in 2007.