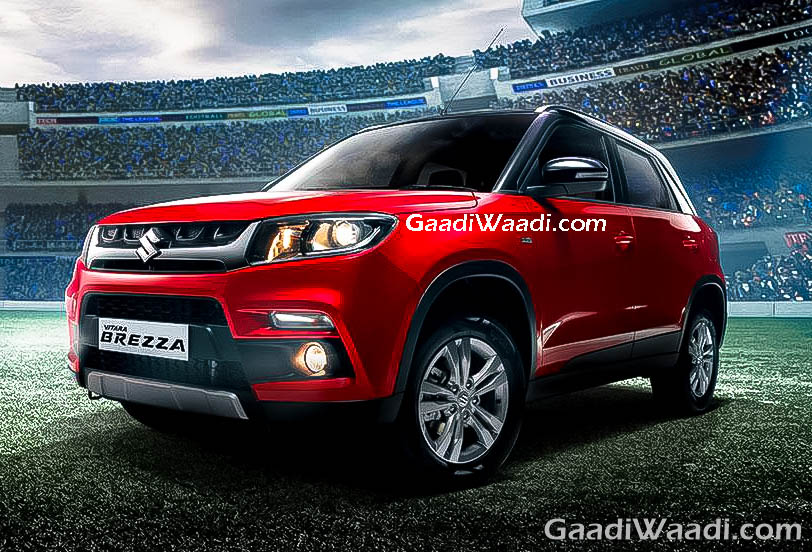 Unveiled at the Auto Expo 2016 Maruti Vitara Brezza marks the entry of Indo-Japanese automaker’s entry to the highly competitive compact SUV segment. The rugged looking car has garnered much appreciation since it was unveiled. Today at an event in evening Maruti Suzuki will announce the prices for the car in India. It will go on sale from 21st March onwards. Maruti-Suzuki dealers across the country can book this car at an amount of Rs. 21000 from 4 PM today onwards.

Vitara Brezza is claimed to be the probable most fuel efficient car of India, when it hits the market. The closest rival against this car will be Ford EcoSport, which delivers a fuel economy of 22.7 kmpl, while the Mahindra TUV300, another compact SUV with which Vitara Brezza will lock horn gives out 18.49 kmpl. Apart from that, Vitara Brezza also beats a bit larger SUVs like Renault Duster and Hyundai Creta, as the former one delivers 20.45 kmpl and the latter one comes with 21.38 kmpl of fuel economy.

It is a quite spacious car despite being a compact one. On the safety ground this car will get driver airbag as a standard feature, while the passenger airbag, ABS with EBD will be available as an option on the (O) variants and as standard feature on the Z variants.

Initially, Maruti Vitara Brezza will be available in diesel variants only. It will get the juice from the 1.3 litre DDiS 200 four cylinder MultiJet engine mated to a five speed manual transmission, which will churn out 90 PS peak power and 200 Nm peak torque. A petrol variant with AMT gearbox is due in future. The car will be available in six different trims, which are: LDi, LDi (O), VDi, VDi (O), ZDi and ZDi+. Expect the price tag between Rs. 6.9 lakh to 9.8 lakh.