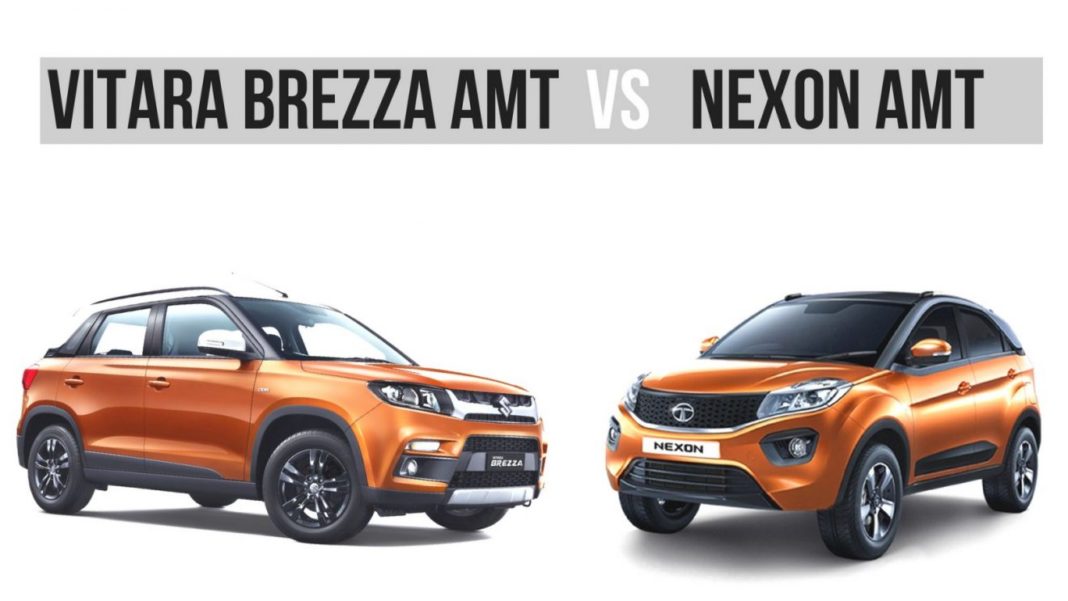 The two hot AMTs in the market go head to head in our specs comparison here! But who will come out on top? Read below to find more:

Maruti Suzuki India Limited (MSIL) is readying to introduce a slew of new updates to its existing portfolio apart from launching new vehicles during the course of this year. The Vitara Brezza, being the best-selling SUV in the country, has grown as a main sales attributor and capitalising on its popularity the company has now expanded its range.

With the popularity of AMT growing in volume spaces, the Vitara Brezza AMT was long anticipated and it enters at the right time following the introduction of Nexon AMT – the first diesel AMT in the subcompact SUV segment.

The Nexon outsold the established EcoSport and WR-V to become the second top-selling model in its segment behind Vitara Brezza at the end of last year and showcases its potential every month by averaging good numbers – around 4,000 units approximately. 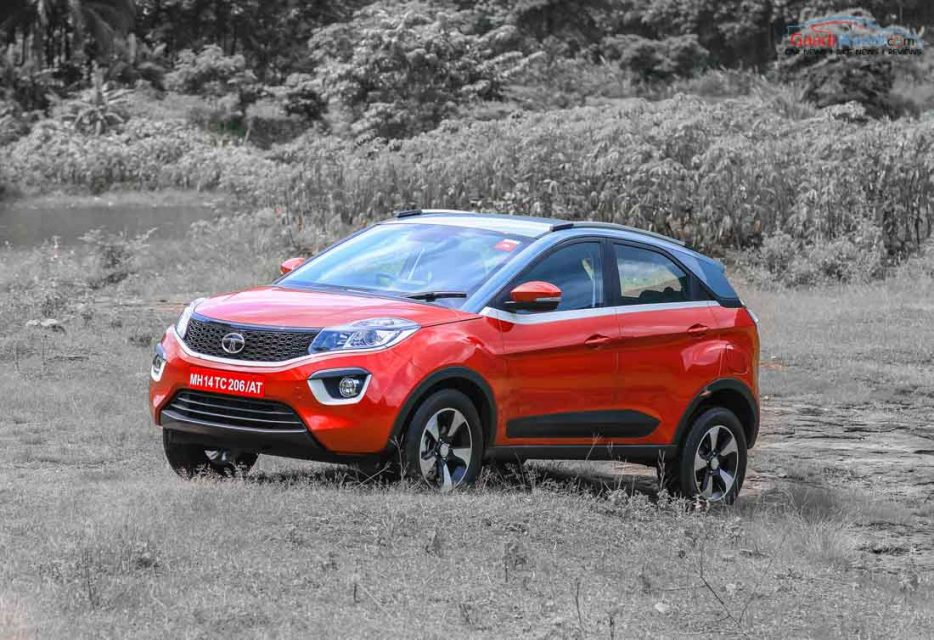 The Nexon AMT is sold only in a single fully-loaded variant called XZA+ and is based on the top-spec XZ+ trim, unlike the Brezza AMT which is retailed in both mid-spec and top-end trim. However, since the Vitara Brezza does not have a petrol engine option, the Nexon AMT has another advantage as it does offer a petrol AMT. With more things to consider on, the race for best AMT in the segment has fuelled up.

Here is how they compare based on the specifications and features: 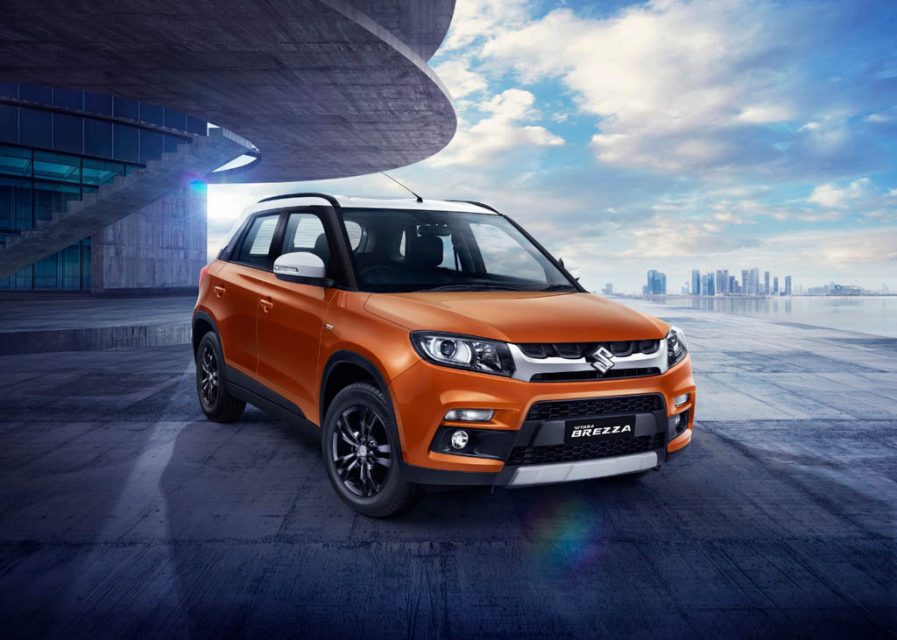 Apart from making safety features as standard across the board and eliminating the need for LDi (O) and VDi (O) variants, Maruti Suzki has applied additional chrome treatment on front grille and boot garnish, along with new multi-spoke black glossy alloy wheels.

In response to the new moves from rivals such as Tata Nexon and Ford EcoSport, these sporty exterior changes have accompanied as a MY2018 updated. The Maruti Suzuki Vitara Brezza continues to have the boxy traditional SUV design philosophy with sharp design elements.

Tata introduced the six-speed AMT with creep function and hill assist on Nexon. It is also the first subcompact SUV in the Indian market to feature Eco, City and Sport drive modes across its range. The arrival of AMT does not change that either but except for a new Orange colour, there is no exterior change compared to the regular model. The Nexon has taken styling inputs from Tata’s European design studios and has a modern coupe profile.

It has a dual-tone exterior connected by the slingshot line as design inspiration was taken from Range Rover by coupling silhouette of sedan and body of a compact SUV. The only major visual difference is the presence of variant badging on the boot lid.

The five-speed AGS (Auto Gear Shift), making its way into Vitara Brezza is not something new to the brand and it has been well-received in models like Dzire. The 1.3-litre DDiS 200 four-cylinder diesel engine continues to develop a maximum power output of 90 PS at 4,000 rpm and 200 Nm of peak torque delivered at 1,750 rpm.

The Nexon’s 1.2-litre Revotron petrol engine makes 110 PS and 170 Nm torque. The 1.5-litre Revotorq is the most powerful in its segment as it kicks out 110 PS and 260 Nm.
The Nexon’s range has been expanded to allow for the first-in-class six-speed AMT transmission with multi driving modes. Just comparing the diesels, the Nexon is the powerful and torquier of the two and offers six-speed transmission.

We can expect similar fuel efficiency of 24.3 kmpl as the main advantage of AMT is returning same mileage as its MT sibling while offering the advantages of the two-pedal technology should on the Vitara Brezza.

The petrol AMT returns 17.88 kmpl and the diesel AMT is claimed to have fuel economy of 23.97 kmpl on the Nexon making the competition even closer. But, having petrol AMT option is an added advantage. 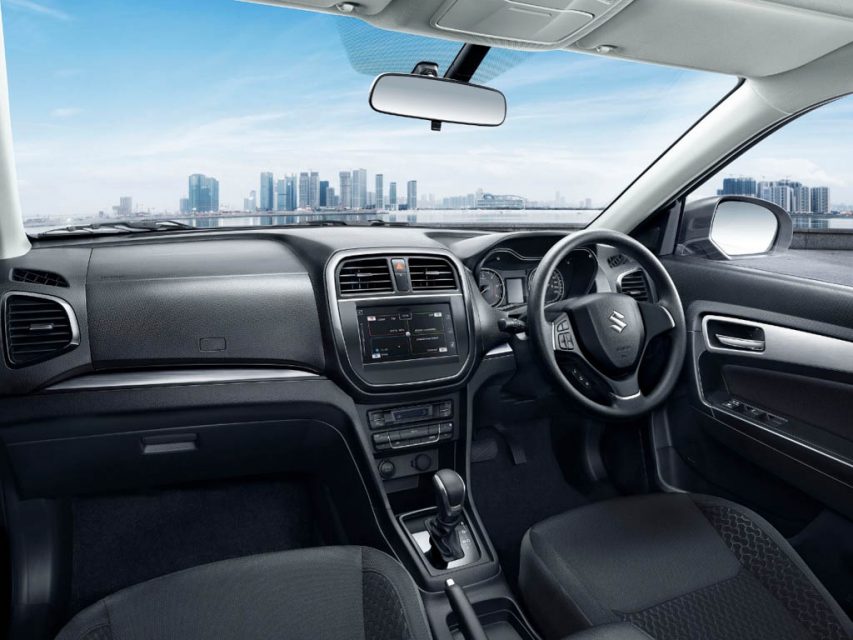 Besides the all-black interior theme, the 2018 Maruti Suzuki Vitara Brezza AMT now complies with advanced safety regulations including pedestrian safety ahead of the regulation coming into effect. It has already been certified for offset and side impact crash tests. It features dual airbags, ABS with EBD, reverse parking sensors, ISOFIX child restraint system, high speed warning alert, front seat belt pre-tensioners and force limiters as standard across all range.

The major highlight of Nexon AMT, however, is the technology itself as in ‘Auto’ mode, the driver can choose between Eco, City, and Sport modes while ‘Tiptronic’ or manual gear selection works only in Sport mode. The Wearable PEPS Key allows you to strap on Nexon’s keys through wrist band.

The “intelligent transmission controller” comprises of functions like fast-off, kick down and anti stall. Tata calls the AMT as ‘Nexon with HyprDrive Self-Shift Gears (S-SG)’. The Crawl Function provides convenience during slow moving traffic by assisting the car to move ahead and the Smart Hill Assist prevents the rolling back while tackling uphill sections. Comparing the top-of-the-line models, the Nexon is indeed more feature packed.

The Tata Nexon AMT is offered in both petrol and diesel engines at Rs. 9.41 lakh and Rs. 10.3 lakh respectively (ex-showroom, New Delhi) in a fully-loaded XZA+ trim. its pricing does seem on the upper side as it is offered only in top-end.

But comparing just the range-toppers, you have very little difference between them and Tata Motors will soon be introducing the AMT variants in lower spec trims as well to make matters more affordable. 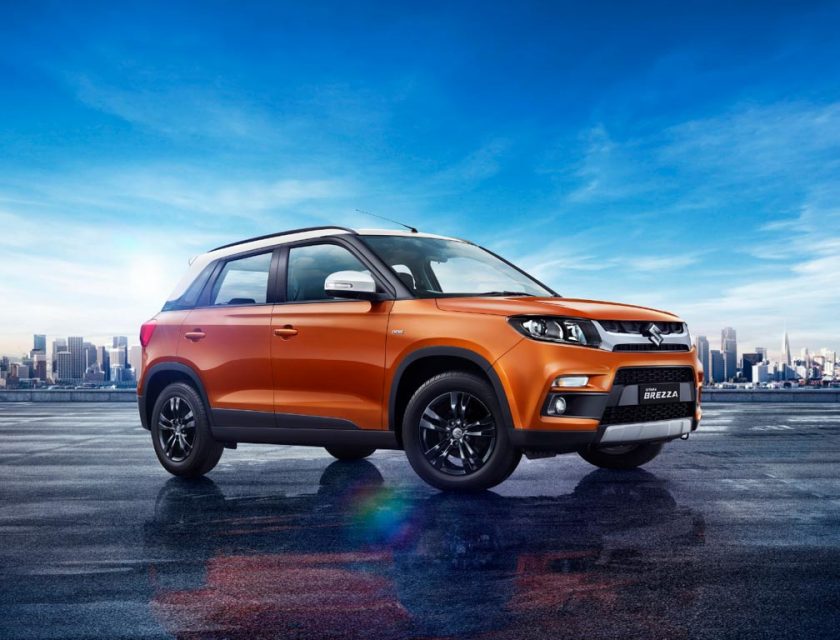 The Nexon AMT also gets a new paint job namely Etna Orange with Sonic Silver finished roof along with regular palette consisting of Moroccan Blue, Glasgow Grey, Vermont Red, Seattle Silver and Calgary White. The modern paint schemes do make both the SUVs stand out among the rest of their competitors. As Nexon was the solo model to offer a diesel automatic option in the segment, Vitara Brezza jumped in the bandwagon and launched its own AMT within days after the former’s market entry. Going by the mileage claims, there is not much difference between the two but the exterior changes in the Vitara Brezza’s MY updates do make it sportier.

The Nexon, already having a youthful stance, is no slouche either. However, considering the affordability, the Vitara Brezza diesel AMT mid-spec priced at Rs. 8,54,000 is cheaper compared to the fully-loaded XZA+ Nexon and naturally making it more attractive.

The Nexon’s petrol AMT rivals EcoSport’s AT which is costlier as well as returning lesser mileage. If you are in the market for a compact petrol automatic SUV, the Nexon will hit the right chords but Vitara Brezza’s diesel AMT will be the most viable option until the diesel AMT is introduced in lower variants of Nexon.