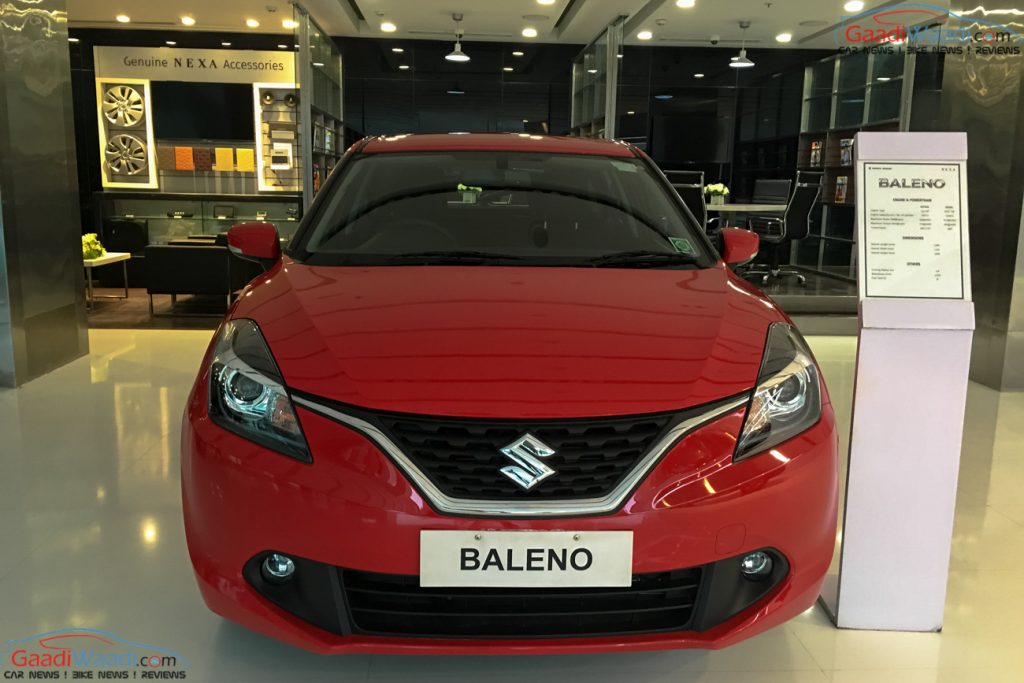 Maruti Suzuki stepped into an unknown territory with the market entry of the Baleno premium hatchback. Launched in late October 2015, it has been a stunning sales gatherer and crucially paved the way for the company’s premium strategic plans. Over the almost last one year, Maruti Suzuki has been able to maintain the popularity of Baleno with a good haul of sales numbers.

The highest ever monthly sales was registered in March as 16,426 units were sold at a massive YoY growth of 163 percent. Consolidating other months, an average of well over 8,000 examples meant the fiercest rival Hyundai Elite i20 had been tested to the full extent. Last month, Baleno registered 16,426 units as it entered the 16k club for the first time. The arrival of Baleno RS by February 2017 will have further extended the advantage it has over Elite i20 and Honda Jazz. Maruti hopes to build on the path laid by Baleno as more products are expected on the Nexa premium outlets in the near future.

In addition to domestic sales reaching new heights, Baleno is being exported largely from India to global markets like Japan, Australia, New Zealand and countries in Latin America and Europe. The Baleno is exclusively manufactured in India and is also the first car to be exported from the country to Suzuki’s home land of Japan. Maruti Suzuki planned to expand the shipping of the car to over 100 international markets as well.

The launch of Maruti Suzuki Baleno was hugely anticipated as the nation’s largest car manufacturer looked to up its brand image by introducing a premium hatchback. Since the arrival of the S-Cross crossover as the first product from the NEXA premium dealerships hadn’t go as well as the company would have expected, there was so much expectations laid on the shoulders of the Baleno and the pricing in which it will be positioned against the main competitor Hyundai Elite i20. 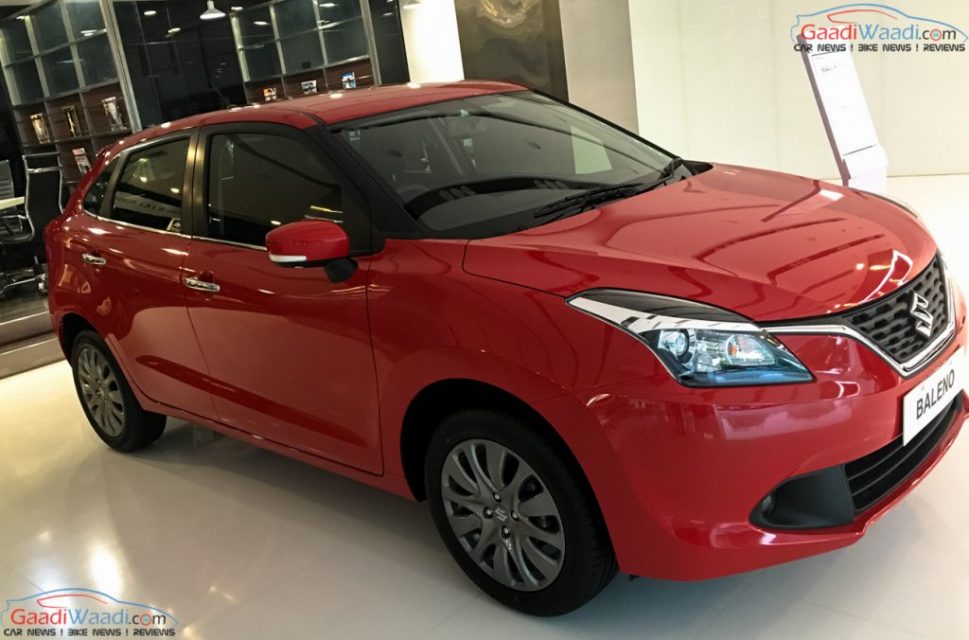 Defying all the negativity, the Maruti Suzuki Baleno was launched with standard safety features right from base-end variant Sigma Petrol variant. The new premium hatchback underlined the fire power the company had as in very short period after the entries of Ciaz and S-Cross, the wraps were lifted on the Baleno.

After the Swift, it’s the Baleno set to take the manufacturer to new heights. Baleno is based on a new platform which will spawn future cars and hence the design ideology is different as it follows a new Liquid flow concept. Here’s everything you need to know about the Maruti Suzuki Baleno:

The global hatchback is manufactured in India as well as exported to foreign markets. It is being offered in four variants Sigma, Delta, Zeta and Alpha. The CVT automatic transmission is available only with the Delta and Zeta variants – the Alpha comes more feature-packed. There are ten trims available and each of their prices is listed below: (all ex-show room, Delhi)

The second product to be sold from the Nexa premium outlets comprises of one choice of petrol and a choice of diesel engine. The 1.2-litre, inline, four-cylinder, DOHC, 4V, K-Series VVT petrol motor is good enough to pump out a maximum power output of 83 bhp at 6,000 rpm and 115 Nm of peak torque at 4,000 rpm. Driving the front wheels is through a five-speed manual transmission or a CVT automatic.

The diesel engine on offer is the similar 1.3-litre, four-cylinder, turbocharged, Multijet DDiS 200 unit powering the Swift hatchback. It develops 75 bhp at 4,000 rpm and 190 Nm of peak torque at 2,000 rpm. No automatic gearbox is provided and thus a five-speed manual serves the transmission purposes.

Since the Baleno is built on an all-new platform, it’s close to 100 kilos lighter than the Swift amidst being bigger than the compact hatchback. It serves in gaining better fuel efficiency as well as the 1.3-litre diesel has a claimed fuel efficiency of 27.39 kmpl and the 1.2-litre petrol has rated fuel economy of 21.4 kmpl.

The five-door, five-seater comes with 37 litres of fuel tank capacity and has 865 kilograms of kerb weight. The turning radius stands at 4.9 metres and rides it on McPherson Strut front and Torsion Beam rear suspensions.

The steering wheel is electric power-assisted and the front disc brakes combine with rear drum set-up for stopping duties. The base variants get 185/65 R15 steel rims while the top-spec models sits on 195/55 R16 alloy wheels.

The Maruti Suzuki Baleno looks stylish and has a lot of road presence. The Suzuki’s new Liquid Flow design philosophy means that the front grille is entirely different from any other model currently on sale. It’s unique and has chrome outlines running from the V shaped grille upwards and melting into the headlamps.

The headlamps’ shape looks somehow in close resemblance to the Swift and thus the front fascia is quite Swift-alike. The headlamp cluster houses smart LED Daytime Running Lights and projector xenons. The round-ish front bumper has sharp detailing at the lower portion much like one of its rivals VW Polo.

The impact of the Liquid Flow design can be clearly seen from the sides and the curvy front fenders adds plenty of character to the hatchback accentuated by the quirky bulge. The stretched back A-pillar is also identical to the Swift but has more rake angle and the glass house area is eventually large.

The multi-spoke 16-inchers on the top-spec models look beautiful and are shod around by low-profile tyres. The windows and door handles get chrome treatment as well and the high bootlid spring boards the overall appearance. The rear profile looks elegant with the presence of LED tail lamps.

The refreshed cabin gets a new dashboard layout and shares a lot of stuff with the Swift. The sporty all-back treatment with the silver accents on the dashboard and door trims mimics the Swift. The flatter dashboard and the centre console bode well with the latest in-car expectations while the stereo and climate control switches are aligned perfectly. There is a contemporary instrument cluster but the top-of-the-line trims get adorned with a colour TFT multi-information display.

There are animated graphics to display real-time fuel consumption and power output and the gripper steering wheel has been carried forward from the Ciaz and S-Cross. It is multi-functional and has easily accessible mounted controls. It has plenty of storage spaces but there are no rear armrest and leather seats in the options list. The range-topping model comes featured with touchscreen music system with USB and Aux, navigation, Bluetooth, voice command, Apple CarPlay and reverse parking camera, climate control, engine start-stop button, etc.

The LCD screen at the centre console also works as the display for rear view parking camera and automatic air conditioning controls. The rear comes with 60:40 split seats to offer extra space. It also offers sufficient amount of knee and leg spaces for the occupants at the back despite being a sub-four metre hatchback.

The range-topping trim gets the first-in-class seven-inch SmartPlay infotainment system with Apple CarPlay and Voice Command, Projector headlamps, reverse parking camera, etc besides the features mentioned on the Sigma, Delta and Zeta.

The first premium hatchback from the Indo-Japanese manufacturer’s stable will go up against the likes of the well-received Hyundai Elite i20, Volkswagen Polo and the Honda Jazz.