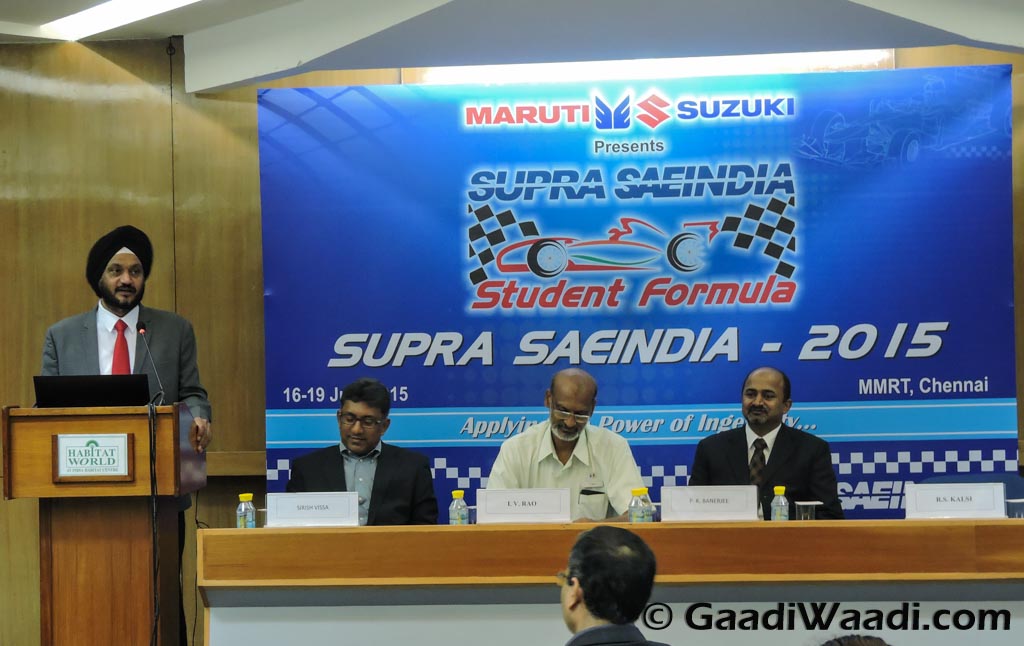 Maruti Suzuki has just announced the finale of SUPRA SAEINDIA 2015 in partnership with Society of Automotive Engineers India (SAEINDIA). This is the 3rd edition of the event and will take place at Madras Moto Track from July 16-19.

SUPRA 2015 as a platform encourages students from engineering colleges to conceptualize, fabricate and run a Formula prototype car. The event will witness over 2,200 students from 167 colleges showcasing their talent to reach the podium. The event is one of the most awaited events every year for automobile engineering students as it lets them come forth and showcase their talent. Each team has passed three stages to qualify for the finale.

In Stage 1, All teams gone through virtual round which is elimination round as well, where all teams provided design software & manufacturing techniques. In Stage 2, Teams provided training program’s on sourcing, costing and driving to the students enabling them to manufacture there cars. In Stage 3, only those who successfully manufactured the Prototype car as per the specification are qualified. Out of 167 registrations this year, only 110 teams qualified for the SUPRA SAEINDIA 2015 and region wise split of qualified teams is as follows, West-51, South-30, North-20 and only 9 from East.

Till now, Maruti Suzuki was giving the participants an Alto F8 (796cc) engine for using in their Formula prototype cars but the limit from this year for the engines has been set at 610cc. The students are mentored by industry professionals and are given a year to prepare their prototype cars. There is no budget limit as to how much can be invested in the prototype.

Team Gaadiwaadi spoke to a participating team from SGIT, Ghaziabad and they shared their experience with us. As per them, they had about 50 students working on the prototype and the total Cost in development is around Rs 4,00,000. The amount was jointly shared by sponsors, students and the college. In the development process, they faced many difficulties due to lack of resources but one funny moment they shared with us, they used 373cc KTM Duke 390 engine for their prototype, after inserting engine into their proto, they found that the engine wasn’t starting despite many attempts, after many hours inspection, they came to know that the KTM Duke doesn’t start until the side stand isn’t moves up in the bike. The team overcame the issue with a little piece of magnet in the side stand sensor and now they are on their way to the grand event.

Mr. R.S.Kalsi, Executive Director, Marketing and Sales, Maruti Suzuki India Ltd said at the event, “Today, India needs talented engineers and we have to put an ignition spark to the talented passionate engineers to come out with more practical developments.”

“Maruti Suzuki has always been focusing on strengthening it’s connect with the youth of India. We want to unleash the power of youth and encourage them to be innovative and creative. Our association with SAEINDIA showcases this commitment towards skill development of engineering students. It helps promote their dreams and aspirations, leverage their strengths, tap into their talents and collaborate with them to make our country’s future bright. Maruti Suzuki has always supported such events and will continue to do so.”

The finale will be judged by a panel of experts from Federation of Motor Sport Clubs of India (FMSCI) and the Indian automotive industry.