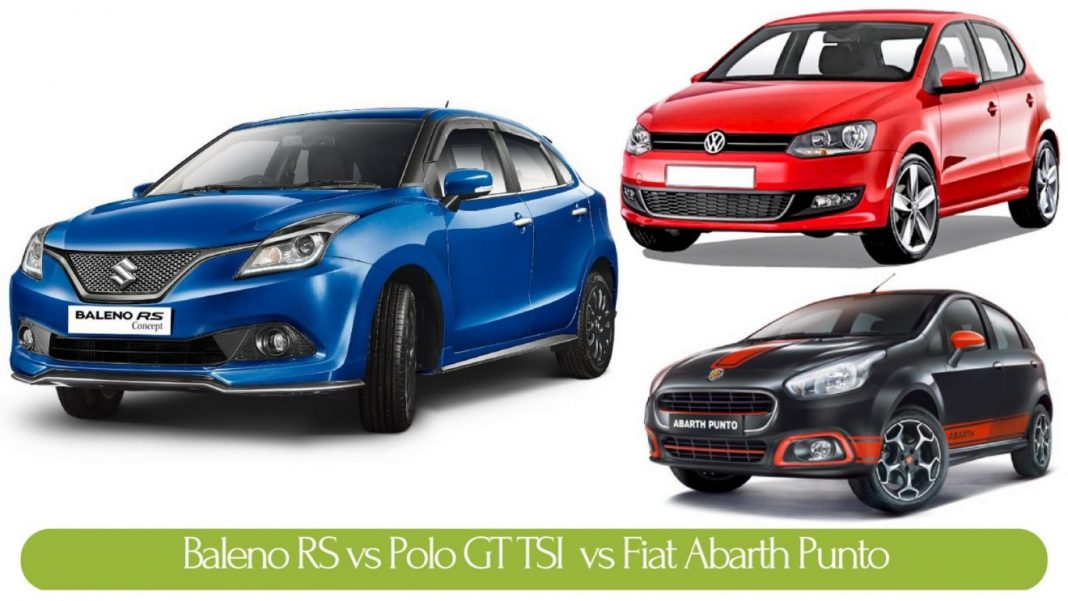 Maruti Baleno RS will face fierce competition from VW Polo GT TSI and Fiat Abarth Punto but who comes on top? Read below to find out

The premium hatchback segment in the Indian market showcased its huge potential over the last few years as Maruti Suzuki Baleno and Hyundai Elite i20 have fought for honours. Although the Volkswagen Polo and Honda Jazz are other two significant rivals, the popularity of Baleno and Elite i20 were so high that they often register monthly sales in the vicinity of 10,000 units.

Volkswagen introduced the Polo GT TSI as a hotter version of the regular model and it has endured good takers. Watching the segment closely, Fiat took a giant leap and entered its Punto strapped with the iconic Abarth badge and a performance-derived 140 hp 1.4-litre mill much to the delight of wanting customers. With the Polo GT and Abarth Punto already in the fray, the premium hatchback space took a different dimension altogether. 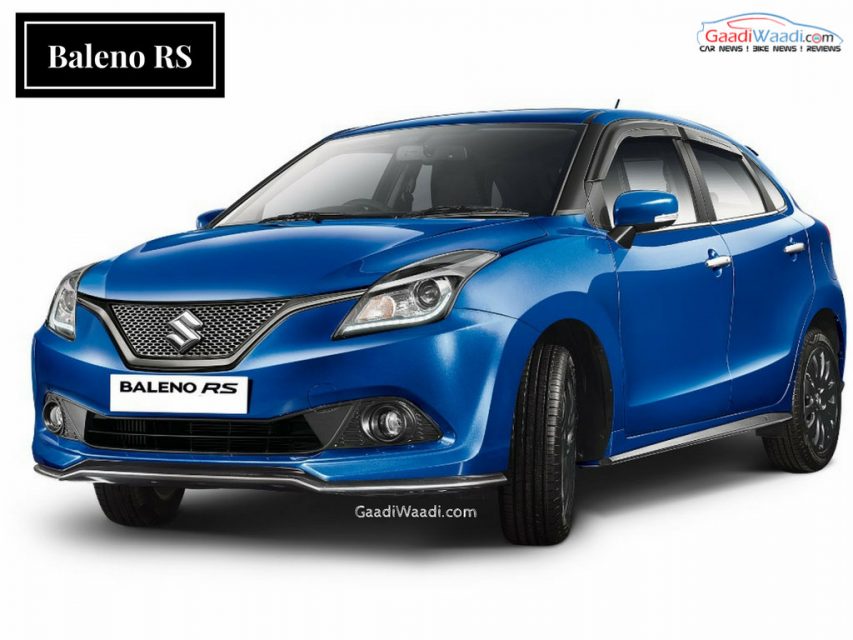 Catering the needs, Maruti displayed the RS version of Baleno last year at the Auto Expo and since then it has become one of the highly anticipated hatchbacks. With it being officially launched now, here is how the Maruti Suzuki Baleno RS compares with Volkswagen Polo GT TSI and Fiat Abarth Punto in the performance war: 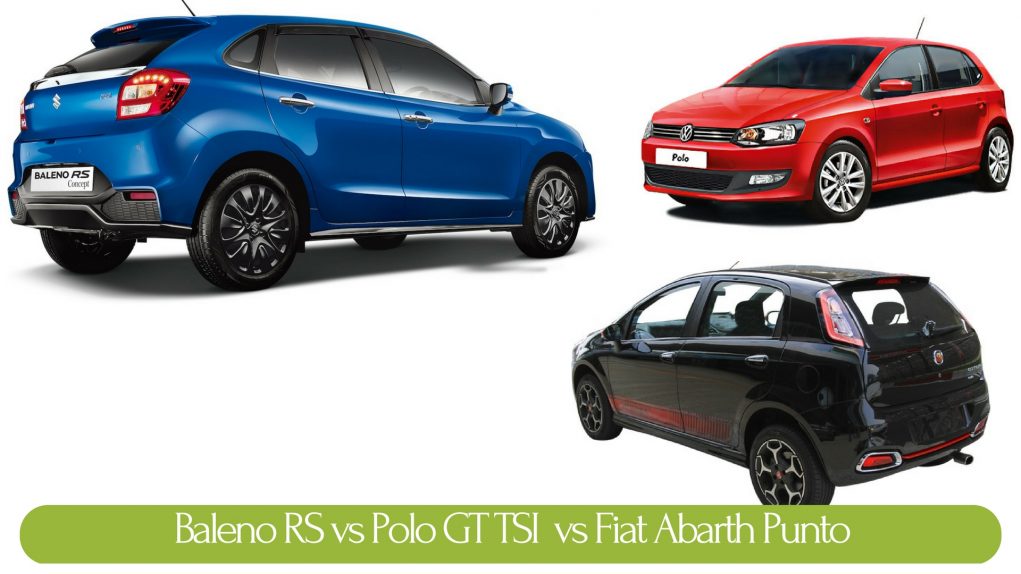 If we go by the concept model unveiled at 2016 India Auto Expo and our exclusive spy shots, the Baleno RS gets subtle updates on the outside just like its main rival Volkswagen. The production-spec Baleno RS features sportier body skirts, beefier tyres and RS badges and plenty of chrome garnishing. Other than that, it looks just as same as the regular Baleno on sale at Nexa.

Considering the overall design, the Abarth Punto does get noticeable cosmetic changes over the current model but new paint scheme, an Abarth logo in place of Fiat’s and T-Jet badging, the signature alloy wheels, red coloured ORVMs, Scorpion decal and a red Abarth stickering on the side profile set it far apart from the regular Punto.

The front of Polo GT TSI looks exactly the same as the standard Polo and the rear gets the same treatment. There is GT badging on the grille, C-pillar, rear door, and as a doorstep garnish. The ‘Estrada’ alloy wheels further accentuate it as a go-fast version. But, the biggest difference is it gets a rear spoiler enhancing the appeal of the car further when looked from different angles. Despite the cosmetic changes, it still retains the classic design with added sportiness of the new car.

All three performance oriented models have unique identities and can stand apart in crowd. But, the Abarth Punto would get a slight edge over the Polo with its contrasting exterior as you often have to go near it to confirm that it is a GT-spec model. There is no backing from the fact that Maruti Baleno RS will boast a sporty outfit as well and we are certainly impressed by it as it is the best in the segment. . 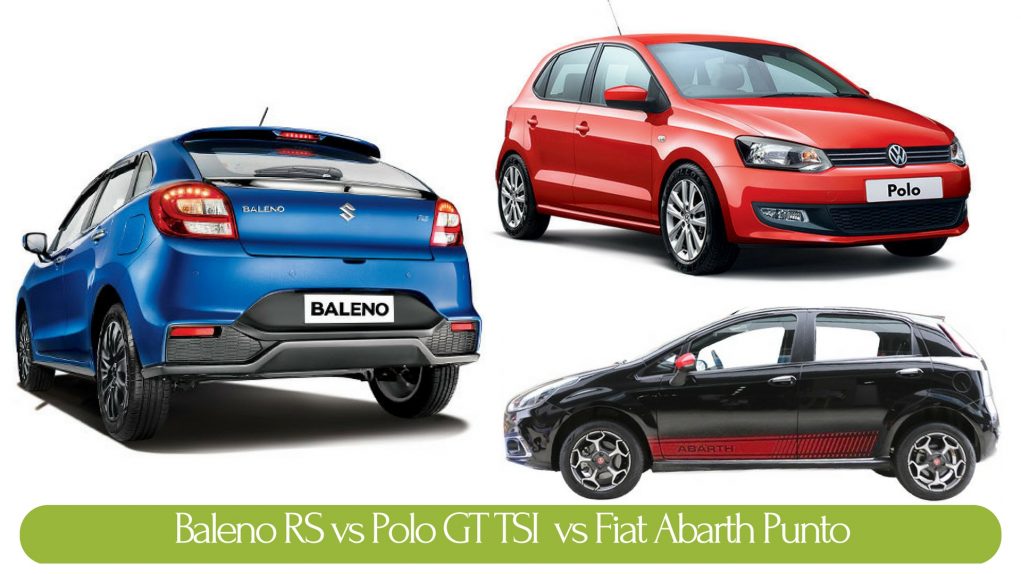 Similar to the standard Baleno, the RS will measure 3,995 mm in length, 1,745 mm in width and has a wheelbase of 2,520 mm. It is 10 mm taller than the regular Baleno and weighs more than 50 kilos going by the leaked spec sheet. The ride height, bootspace and tank capacity are set to remain identical. Maruti Suzuki will offer the Baleno RS with disc brake on all the four wheels.

Baleno RS is the longest and widest but the Abarth stands the tallest of the three. With more wheelbase and 339 litres of bootspace, it is not just sporty but spacious and practical. Moreover, it weighs over 100 kg less and a massive 300 kg lighter than the Polo and Abarth respectively helping a huge amount in handling and performance. 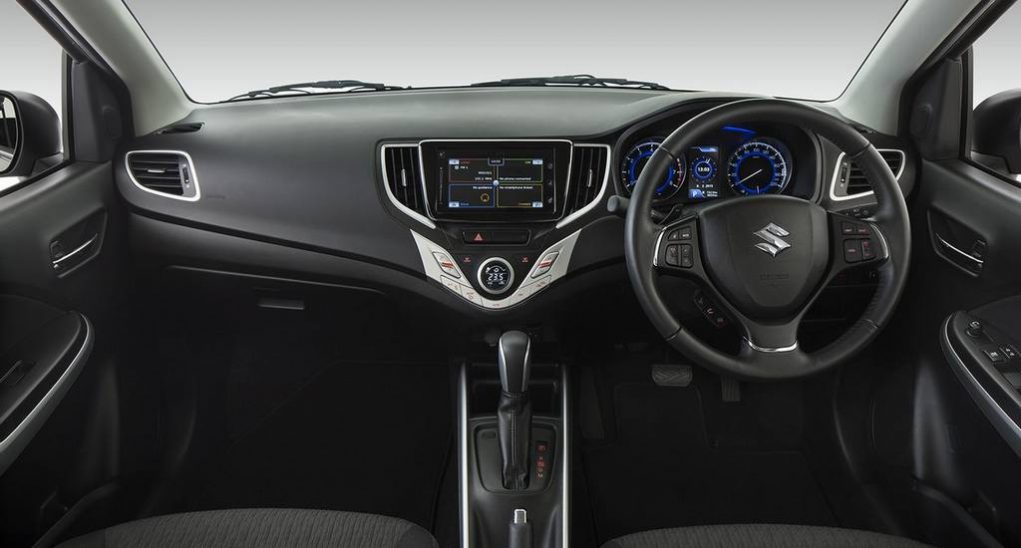 The sportier Baleno RS will come featured with SmartPlay infotainment system with Apple CarPlay while the multi-function steering wheel with mounted controls is taken straight from the standard model. The cabin will be made available with a little more upmarket feel compared to the standard Baleno. The cockpit is driver focussed and roomy and airy as well boding well for long distance travel. 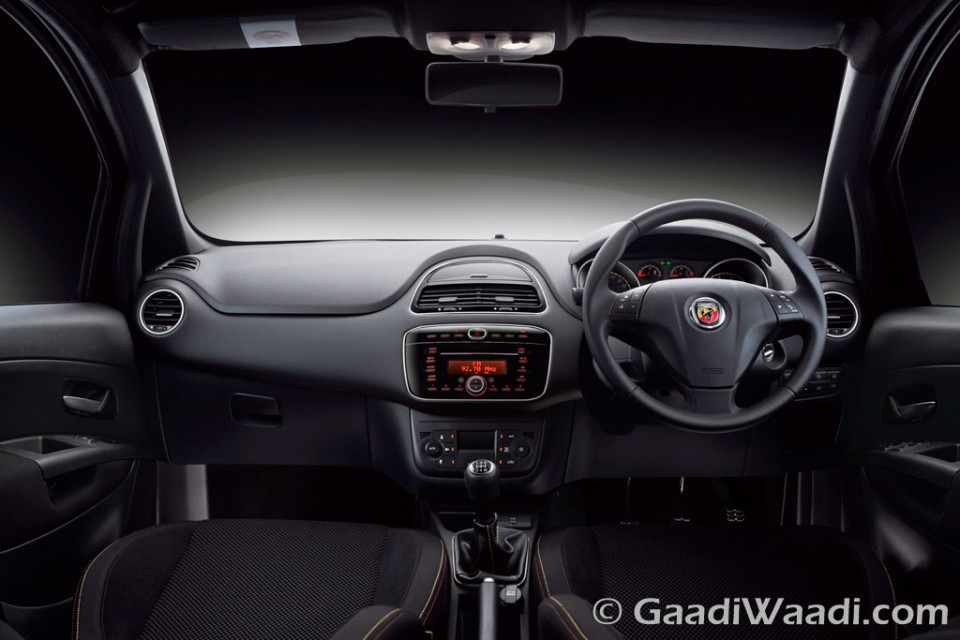 The interior of the Abarth Punto also gets some minor changes like the FIAT logo on the steering wheel replaced by the Abarth logo and instrument cluster with ‘Abarth’ badging in the centre, cabin getting new sporty pedals, different seats with coloured stitching and so on. It is the tallest car of the three but the space on the inside is just enough if not great for the rear occupants.

As you open the door, there is a GT badging on the doorstep, followed by all-black interiors, flat-bottomed three-spoke steering wheel with audio controls, voice command to connect your phone with the centre console. The accelerator and brake pedals get metallic finish. The driver’s seat can be height adjusted feature while the dual-tone front seats and not so spacious rear seats round out the interior. Baleno RS would come out on top here in terms of features and a sporty feel but the fit and finish would certainly go to the Polo GT TSI. 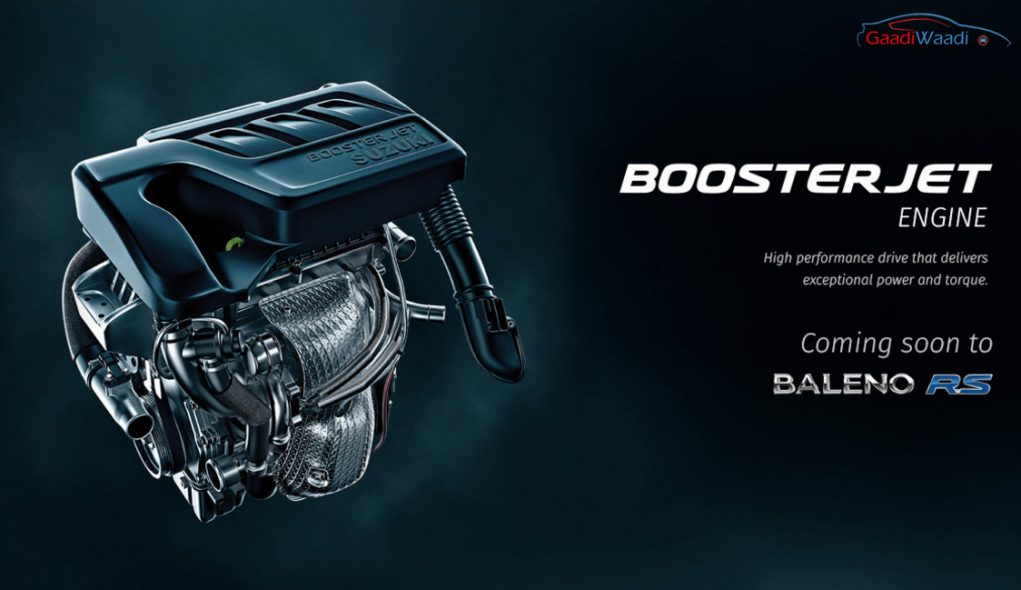 The Maruti Suzuki Baleno RS will get power from a 998 cc Boosterjet turbocharged three-cylinder direct-injection engine. The engine might be smaller than the regular model’s 1.2 litre petrol unit, but the turbocharger gives the new motor a definitive edge. It will churns out 101 hp of peak power and 150 Nm of maximum torque. It should be able to do 0-100 kmph in less than 10 seconds and return 21.1 kmpl claimed mileage. 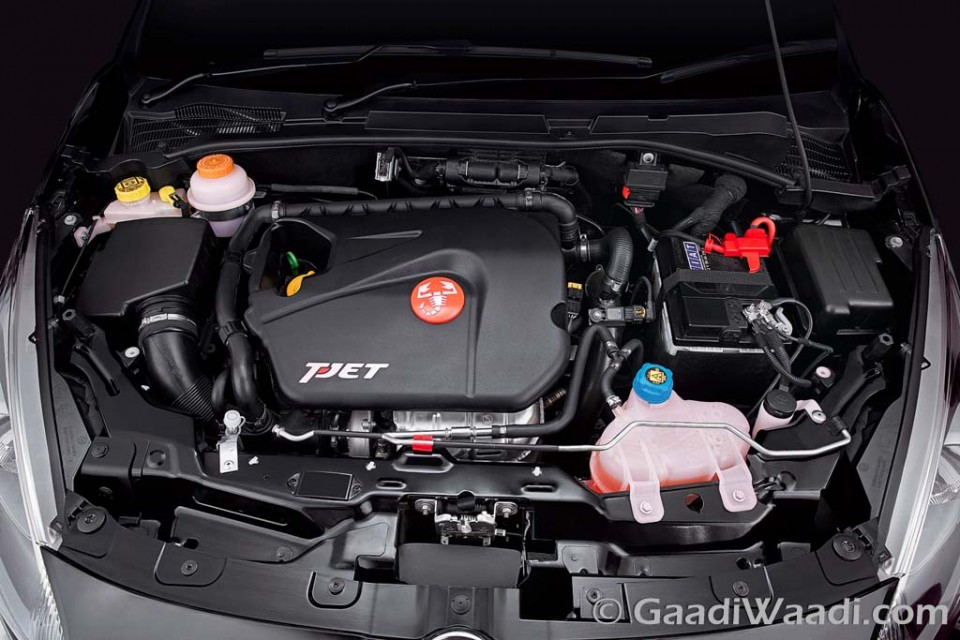 It will be offered with the regular five-speed manual transmission only thwarting the rumours of a CVT. The Abarth Punto, on the other hand, gets a four-cylinder 1.4-litre mill that produces 140 bhp and 200 Nm of torque. Power is sent to the front wheels via a five-speed manual gearbox. The car gets a lowered ride height, disc brakes on all wheels and a stiffer suspension as well.

The four-cylinder, 1.2-litre, TSI turbocharged petrol engine generates 105 PS of power and 175 Nm of torque, resulting in a power-packed performance of 0-100 kmph in less than 10 seconds. The top speed of the GT TSI is close to 190 kmph and has a claimed fuel-efficiency of 17.2 kmpl. The engine is mated to a seven-speed DSG automatic gearbox excitingly. 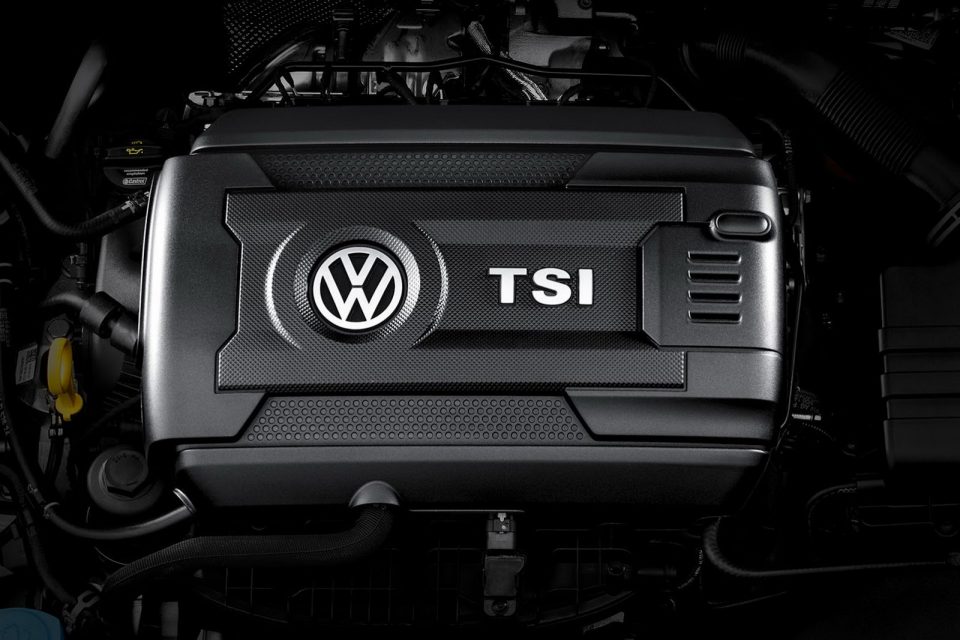 Although, the Baleno RS is the lightest in the segment, the extra 40 horses Abarth Punto develops will help it reach 0-100 kmph in just claimed 8.8 seconds. But the extra weight the Abarth carries may result in Baleno becoming the fun-to-drive car around corners and bettering the Polo as well in terms of fuel economy.

The Maruti Suzuki Baleno RS is priced aggressively at Rs. 8.69 lakh (ex-showroom Delhi). The Abarth Punto carries a price tag of Rs 9.91 lakh, exactly what the top-of-the-line naturally aspirated version costs, while the Polo GT TSI costs Rs. 9.11 lakh (ex-showroom, Delhi). The Baleno RS has been slated competitively against both the VW and Fiat performance hot hatchbacks and thus will be a better deal for the customers – Rs. 42,000 cheaper than Polo GT and a whopping Rs. 1.20 lakh less expensive than the Abarth Punto. 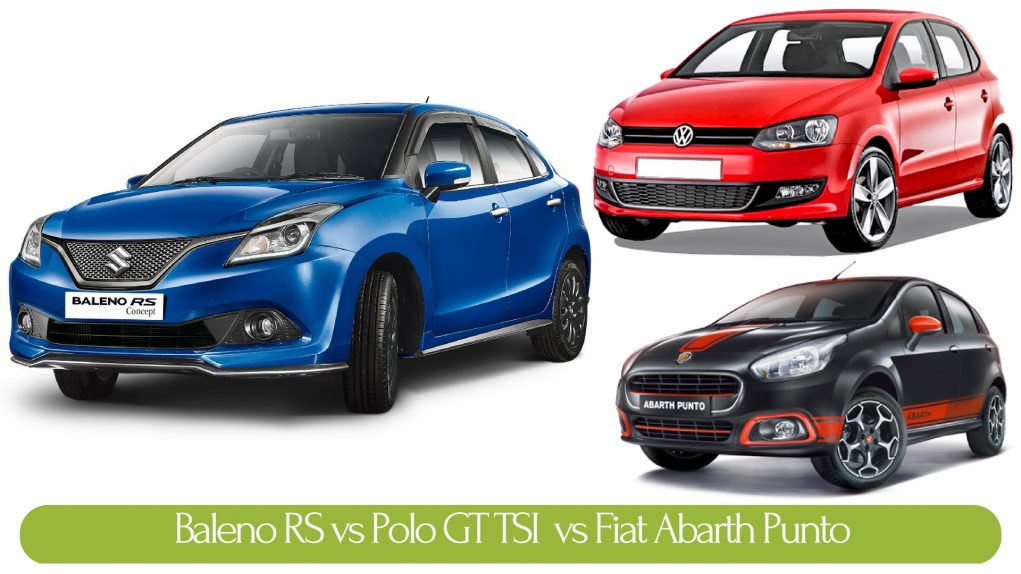 The hot hatchback segment is all about performance and in that case we would award the Abarth Punto as the clear winner with an insane 140 horsepower from a turbocharged engine but it’s the costliest in the comparison. It has an incredible straight line stability and can blitz to 185 kmph on the highways in no time.

The Polo GT has the classic VW looks and a badge that’s world renowned. Its DSG gearbox is an absolute treat and you can really play with it on long stretches. The GT TSI is a composed hotter Polo and you can feel the performance differentiation if you drive it with standard car in tandem.

In short, both Abarth and GT TSI are worthy hot hatchbacks and in pure performance terms the former would pull out all stops and emerge on top. However, the popularity of the standard Baleno premium hatchback will help the RS a whole lot in recording big sales numbers.

Afterall, it has the aggressive stance that Abarth and Polo GT provides, and has the lightest chassis that would wow you in twisties. Moreover, it is the most affordable in comparison and ticks all the right boxes by being spacious and practical with an economical engine. With the Baleno RS being the complete package of performance, style and equipment we are handing it the winner medal here!