The upcoming Mahindra XUV700 is slated to go on sale in the Indian market in October this year, as a more-premium replacement for the XUV500

Mahindra & Mahindra has released a new teaser video for the XUV700, showcasing a new safety feature of the upcoming SUV, called ‘Auto Booster headlamps’. As the name suggests, this new system boosts the headlight, by switching on additional lights when the vehicle crosses 80 kmph while driving around at night.

In the video, we are given a representation of the headlamp throw with and without the Auto Booster headlamps, and the difference is significant. As the speed of a vehicle increases, drivers get less time to react to obstacles on the road. This problem is compounded at night when the visibility is low and one can’t notice obstacles approaching from a distance.

By increasing the headlamp throw, drivers would be able to see far into the distance, giving them more time to react, consequently improving the safety factor. The XUV700 is expected to come loaded with several other safety and convenience features as well, like front and curtain airbags, adjustable driver seat (with memory function), e-parking brake, a panoramic sunroof, etc.

Spy pictures have also revealed that Mahindra XUV700 will get a dual-screen dash, consisting of a fully digital instrument cluster and a large infotainment touchscreen. The vehicle will also get RADAR-based autonomous driving aids, along with plenty of other safety features, like ABS with EBD, ESP, traction control, ISOFIX mounts, etc.

Mahindra XUV700 is expected to get two engine options – a 2.0-litre turbo-petrol unit and a 2.2-litre turbo-diesel unit. Transmission choices will consist of a 6-speed manual and a 6-speed torque-converter gearbox. As standard, the vehicle will be available in FWD configuration, and an AWD option will be available on higher trim levels. 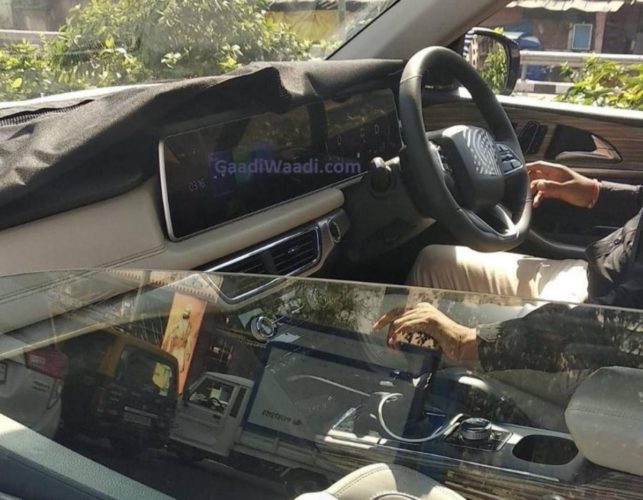 Apart from that, the manufacturer has confirmed that the upcoming SUV will also get an electrified powertrain option in the future. This could either be a fully electric powertrain, or a hybrid one. Further details will be available when the XUV700 is officially unveiled. Its launch is expected to happen in October this year, and upon arrival, its closest rivals in the Indian market will be Tata Safari, MG Hector Plus, and the recently-launched Hyundai Alcazar.