Mahindra XUV700 competes against Toyota Fortuner, Ford Endeavour and Isuzu MU-X and is expected to be priced competitively

Mahindra & Mahindra was expected to launch the Y400, which could carry production name XUV700, on the same date as new Honda CR-V today. But, it seems that the launch has been postponed to avoid clash between the launches as XUV700 is one of the key products from the homegrown manufacturer this year.

The Mahindra XUV700 is not far away though as its market entry could happen before the end of this month. The much sought after full-sized SUV is expected to have a highly competitive price bracket courtesy of the local assembly. Rumours suggest it could be priced more that Rs. 5 lakh to Rs. 6 lakh cheaper than main Toyota Fortuner.

It will also compete against the likes of Ford Endeavour, Mitsubishi Pajero Sport and the Isuzu MU-X which is receiving a thorough facelift next week. The Mahindra XUV700 will be positioned as the flagship SUV above XUV500 and is the rebadged version of SsangYong G4 Rexton that attained good popularity in international markets.

Having made debut under the SsangYong badge last year in Seoul, the SUV boasts several interesting features and it even has longer wheelbase than the Fortuner. Although being sold in a range of engine options globally, India will only get the 2.2-litre four-cylinder diesel unit, at least initially, with 187 horsepower and 420 Nm of peak torque. 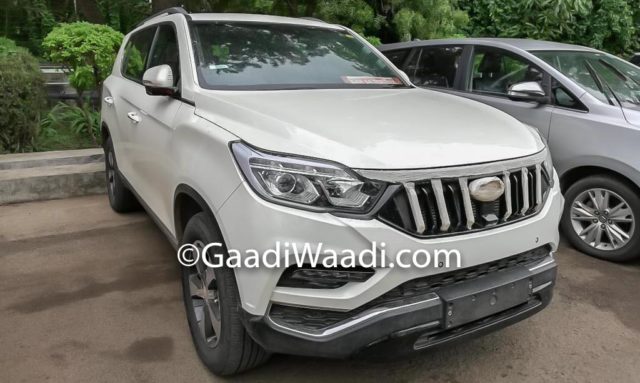 It is connected to a seven-speed torque converter automatic transmission sourced from Mercedes-Benz and it transfers power to either two- or four-wheel-drive system. It measures 4,850 mm in length, 1,920 mm in width, and stands 1,800 mm tall with wheelbase of 2,865 mm.