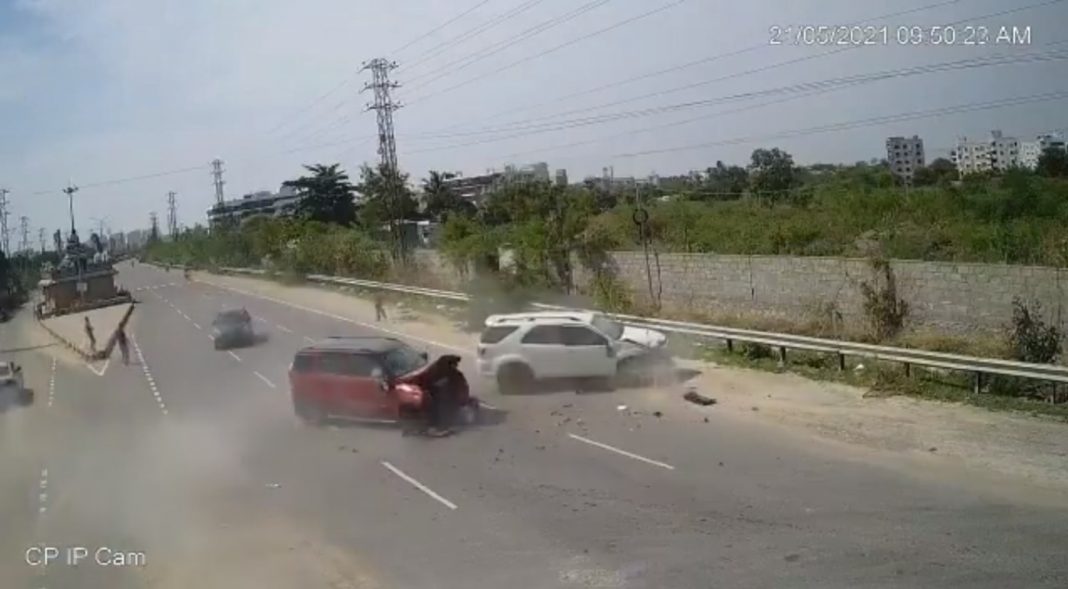 Recently, a video surfaced online, showing an accident between a Toyota Fortuner and a Mahindra TUV300, in which no major injuries were reported to the people involved

Road accidents are one of the leading causes of injury and death in India. According to the Ministry of Road Transport and Highway (MoRTH), over 1.51 lakh people lost their lives in road-related accidents across the country in 2019, with over 4.51 lakh people injured in such accidents. In 2020, road accidents claimed significantly fewer lives due to the lockdown, but that’s not reassuring at all.

Here, we have a video, uploaded by AutoWheels India – Cars & RoadTrips, which shows two vehicles involved in a major accident on a highway. The vehicles in question are a Mahindra TUV300 and a Toyota Fortuner, and the accident was captured by a CCTV camera on the spot. The Fortuner can be seen driving down the middle lane of the highway, when suddenly the TUV300 enters from the opposite side at high speed.

The driver of the TUV300 seemed to have lost control of his vehicle, which rammed straight into the Toyota. The driver of the latter had tried to manoeuvre away from the oncoming vehicle upon noticing it, but to no avail. The impact was quite brutal, as it almost tipped the Fortuner over, but thankfully, both vehicles were on their wheels after the accident.

The bonnet sections of both the SUVs were smashed due to the impact, but there doesn’t seem to be any deformation in the pillars. Airbags seem to have deployed on the Mahindra TUV300 as well as the Toyota Fortuner, which helped the occupants of both the vehicles escape without any major injuries.

However, it is extremely disappointing to see people driving away from the accident without offering any help to the people involved in it. Thankfully, some people did come to help a few moments later. This is a textbook example of how speeding can lead to accidents.

Even though awareness about road safety is steadily rising among people in India, a lot of people continue to neglect it. With stricter laws and better safety standards in cars, MoRTH is hoping to reduce safety accidents by half by 2025.