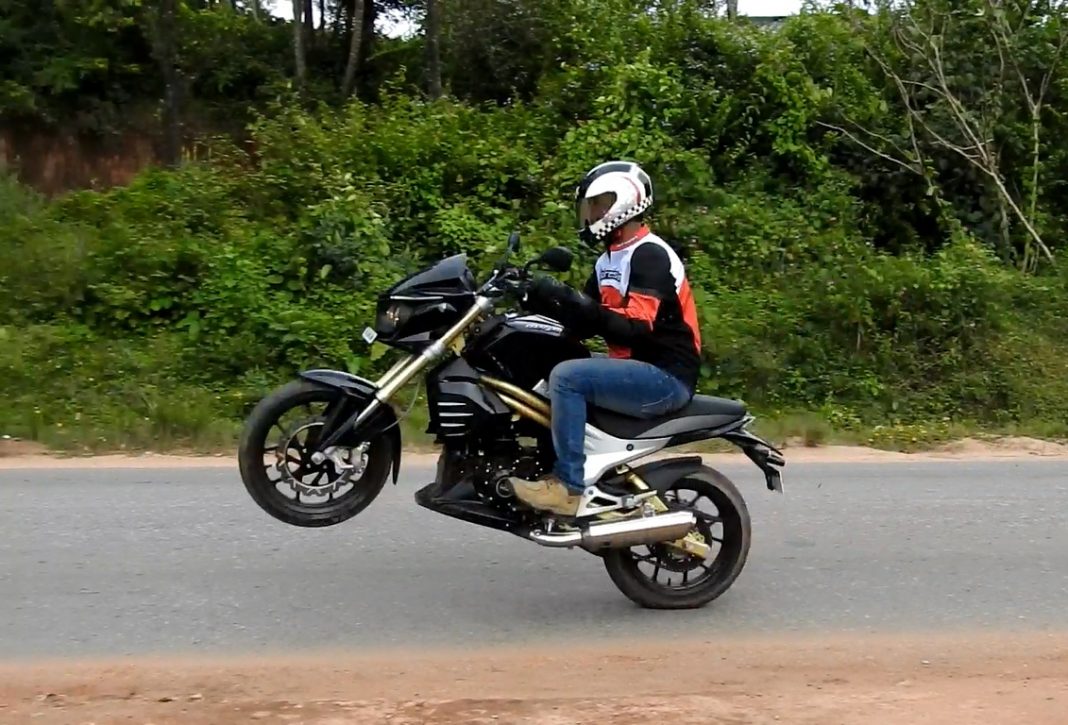 To review Mahindra Mojo motorcycle, we have tested ridden for more than 48 hours and covered nearly 650 KMS. We are quite impressed by the performance of India’s most awaited and highly anticipated motorcycle

When was the last time an Indian company stepped into the market with sporty motorcycles? I think that happened almost 13 years back. Today another Indian company is entering the sports motorcycle company.

The manufacturer is none other then Mahindra and after launching every motorcycle and scooter till date, they have been criticized for doing things wrong. However, this is the year 2015 and Mahindra’s nature of learning from mistakes is very clearly visible.

They have learned it the hard and that’s the best way. Case in point the Mojo, after being showcased in the 2010 by an emotional brand ambassador, the project was kept on hold. It was restarted 3 years back and since 1.5 years the testing has begun in the hands of experts and prospective customers.

Mahindra says a lot of R&D has been done on this motorcycle and they are quite confident, that this is a niche like any other Mahindra product which will capture the market.

Well on paper it looks good. However, today, finally the day has come when we test and tell how this highly anticipated and exciting looking bike on paper feels and rides. 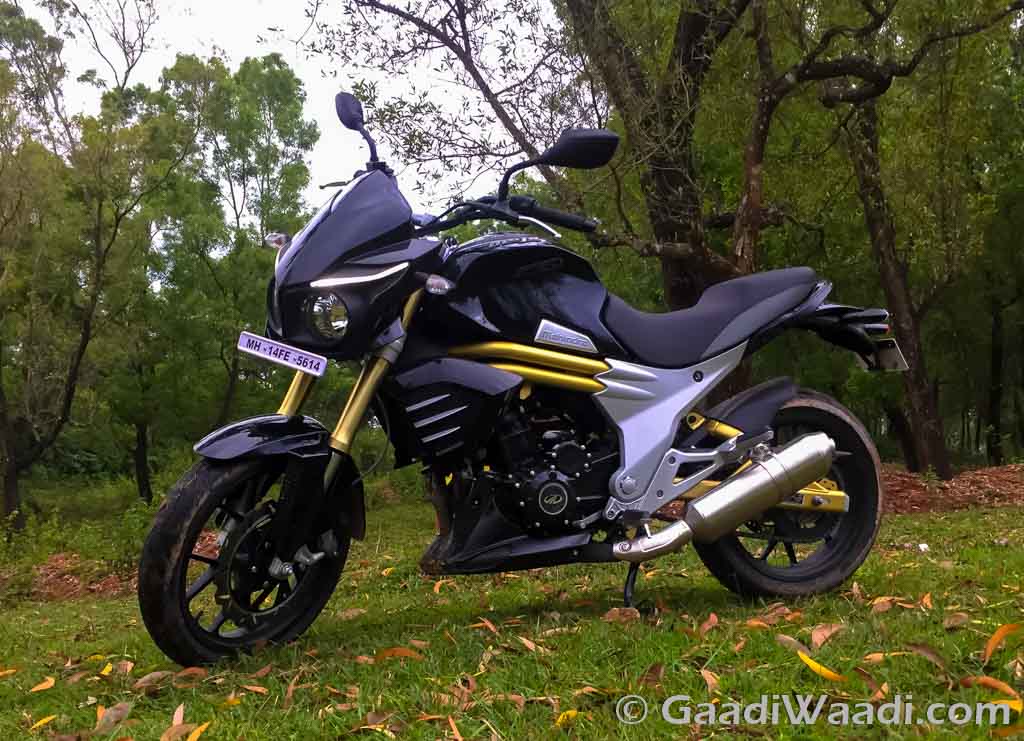 First look at the bike in the flesh and you will notice that the bike doesn’t look like a 300cc motorcycle. The motorcycle looks much more substantial and looks 500cc and above. The bulk of the weight in concentrated in the middle and the front is raked out and rear is stubby.

It’s a chunky look motorcycle from every angle and everything you touch and feel is made of thicker materials. When you consider the first look of the Mojo back in the 2010, the front headlight now has a cowl fixed onto it and has LED DRL headlight, which aren’t that bright in the day, but in the dark they do the job well.

On the side there is the faux boxy panels with three slat of vents for cosmetic reasons only. Black on golden on our bike does look good and will be the Mojo’s signature look, but we liked the red and white and solid white, which looks better.

A large fuel tank with a high quality and extremely detailed Mojo 3-D emblem on it catches attention easily. Handlebar painted in black is always the best option to add a bit of sportiness to the package.

Two exhaust cans at the rear add stance to the motorcycle and look plain though. Rear is minimalist with cool and high number of LED tail-lights and tail-tidy like rear mudguard which throws mud back on the rider.

Tail-tidy is finished piano and black and company logo, a feel-good touch indeed. Fit-finish levels are good, not great as there are rough edges, not visible to the naked eye, but over inspection. 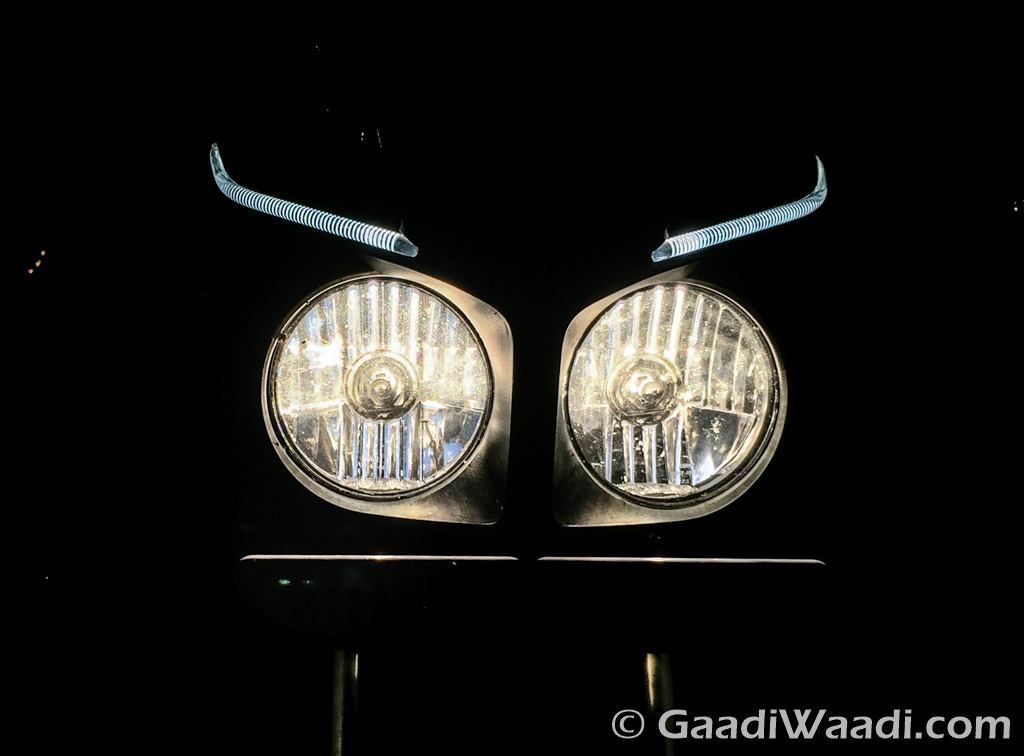 The quality is good, but the cheap material used are both locks and the plastic around it near the ignition. Overall, a slightly quirky looking motorcycle, but the substance and striking attitude will attract a lot buyers like it did on our long test ride.

The seating position of this cruiser feels like right at home. Upright riding position with front-set footpegs and a lot of space for rider as the seat is large in all aspects. Handlebars aren’t raised all the way, but the riding position doesn’t hit your shoulder, but it does manage to put some stress on your elbows. 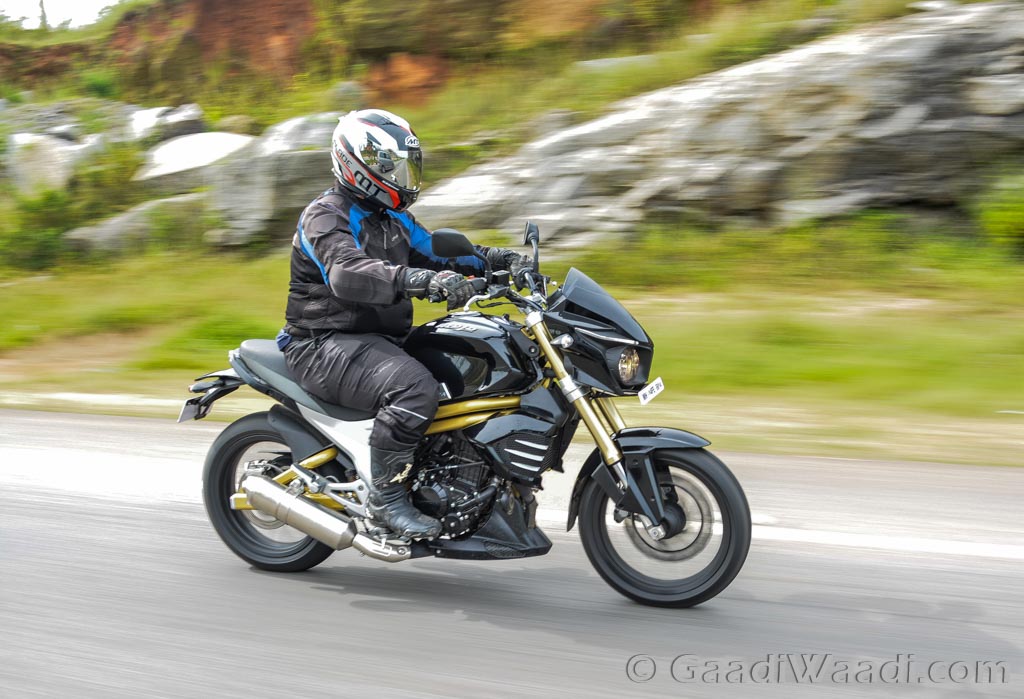 Seats are comfortable for the rider, unfortunately the size of the pillion seat is small as the rear is stubby. Best suited for shorter pillions and rides. Mirrors are very well mounted and despite large built and riding jacket, view behind is large enough. 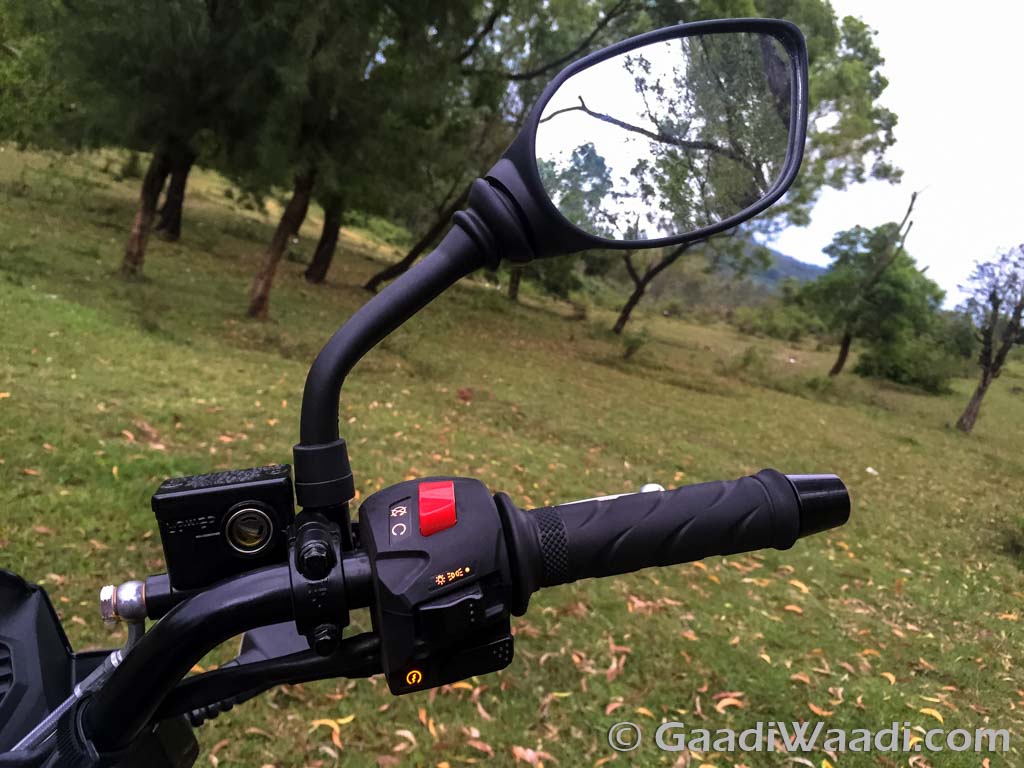 Mahindra has done a good job maintaining the analogue tachometer and digital speedometer combination. There are unique features packed in the meters such as the tachometer, which shows for a few seconds that at what RPM you shifted in last gear. The light follows the tachometer needle all the time and is, yet again, a cool feature. 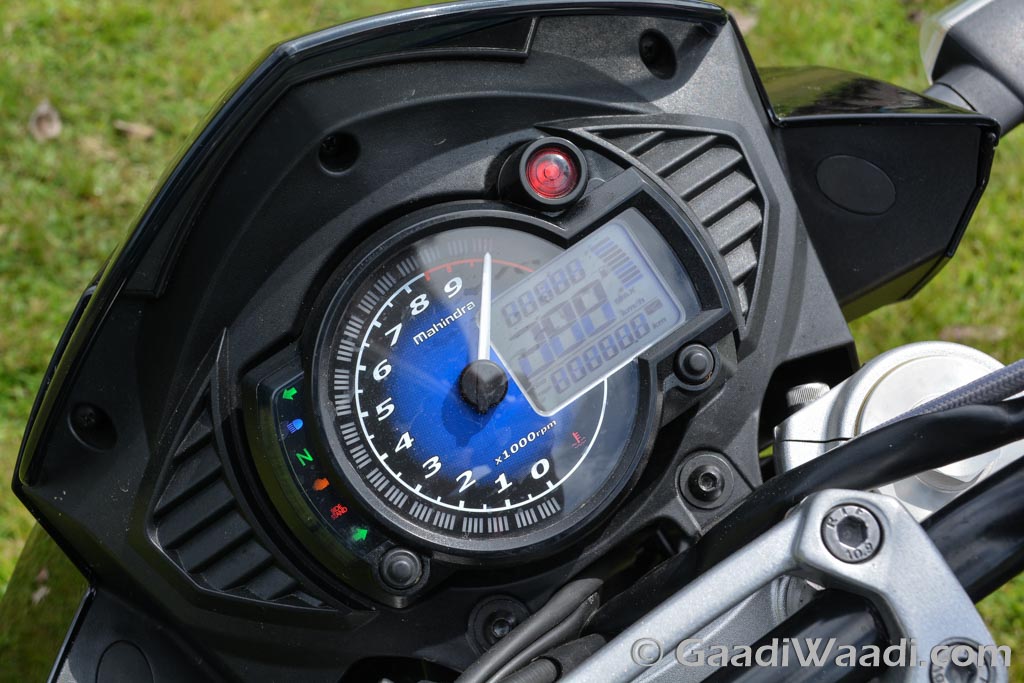 There is a race mode, which turns of lap time, and shows 0-500 and 1000 meter sprint. Top-speed recorder also makes it way just like the Apache. The warning lights sit in a very small and narrow area, beside the tachometer and can be cumbersome to read at times.

Side stand warning, shift lights and top of the meter there is RPM redline light as well. Despite all this fuel related information is missing on a bike which is critical for a cruiser bike. 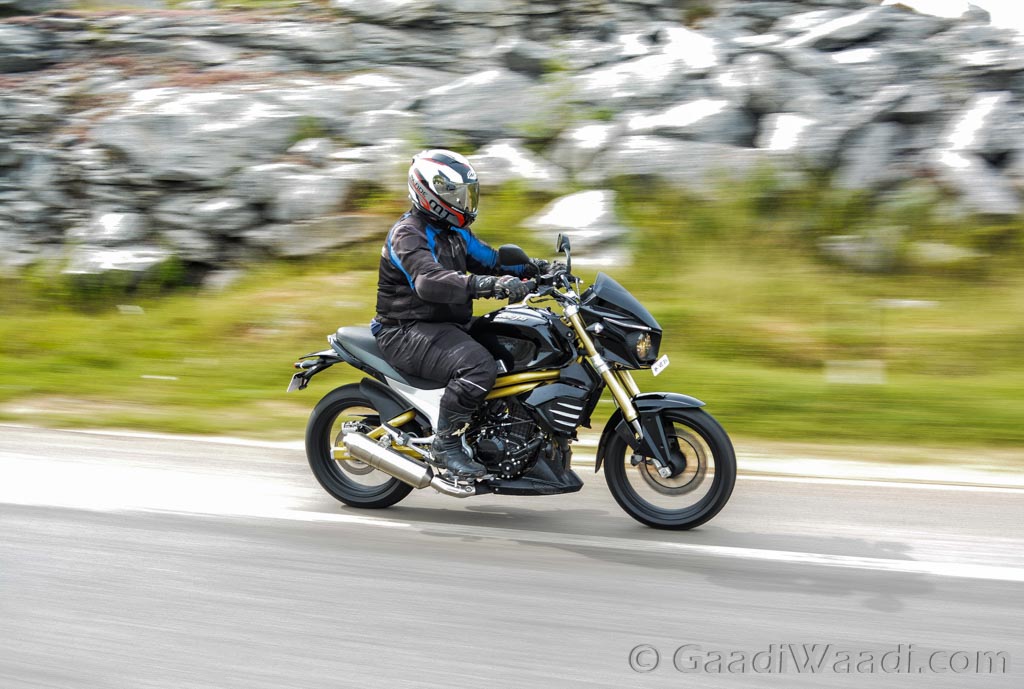 Powering the Mojo is a 300cc liquid-cooled, fuel injected 4-valve DOHC setup engine that makes 27 BHP and 30 NM of torque. The engine is smooth and refined with NVH levels being good. The torquey motor sounds really good at ideal and at all throughout the RPM range.

The engine has a lot of tech on board. Limp home mode is there to protect the engine if anything goes wrong by limiting the speed to 60 km/h. Roll over sensor, as soon as the bike sense the rear wheel is in the air or has no power while moving (lock up while braking), it will shut down the motorcycle engine. 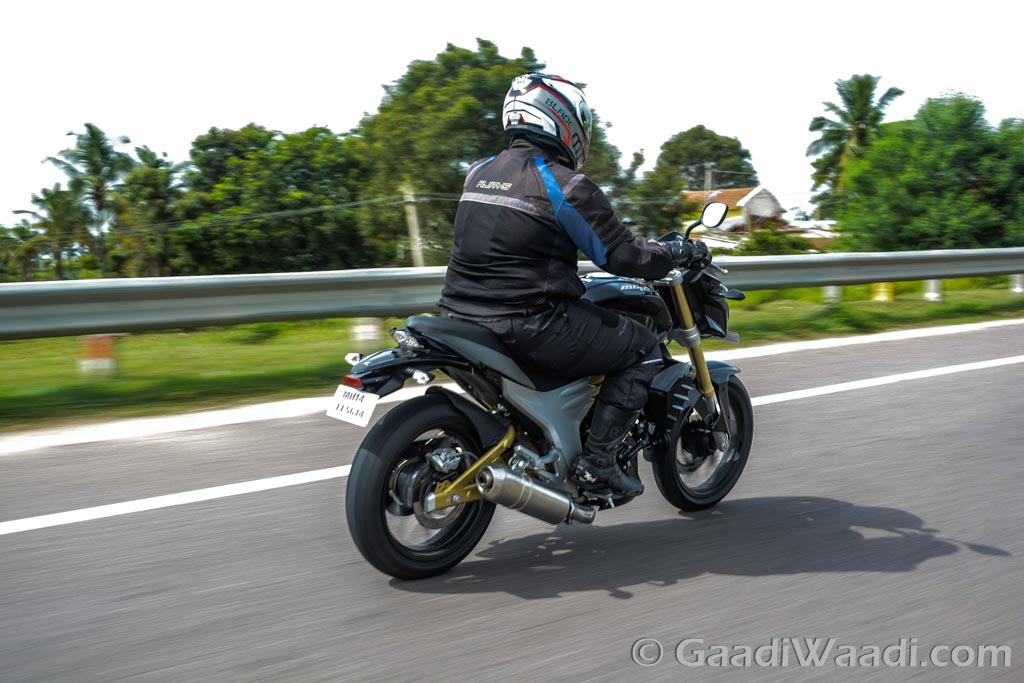 To start the engine, Depress clutch even in neutral to start the engine. There is also an idle controller to make starts in any weather smooth. There is a slipper torque mechanism inside the gearbox to prevent huge amounts of torque to damage the flywheel, as it back limits the torque in first and second gear. Gearbox is smooth, but it can be better.

How is the engine is like? Well, it’s a peach of a motor considering its a single cylinder 300cc, which is quite rare in the industry. Above 250cc there are issues which most people have to face. However, Mahindra has managed to make NVH levels as stellar as the Japanese competition to a quite an extent. 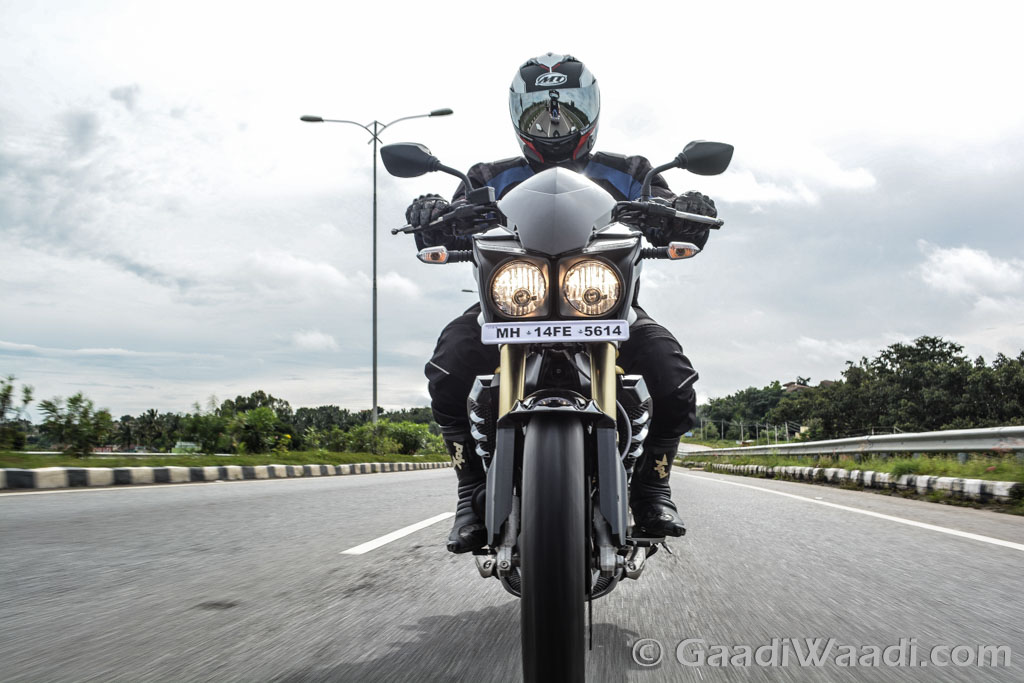 The engine makes a lot of torque and bike weighs a lot could be the reason why it didn’t pass the emission test and hence two exhaust for one cylinder have made it and passed emission test such as Euro 3 and BSIV easily. Mahindra says they can pass the Euro IV as well with minor tweaking.

The motor makes most of the power in the midrange and there is quite a good amount of low end torque as well which makes you shift gears quite quickly. The power band is very linear and all of the power is easily accessible without any interruptions. 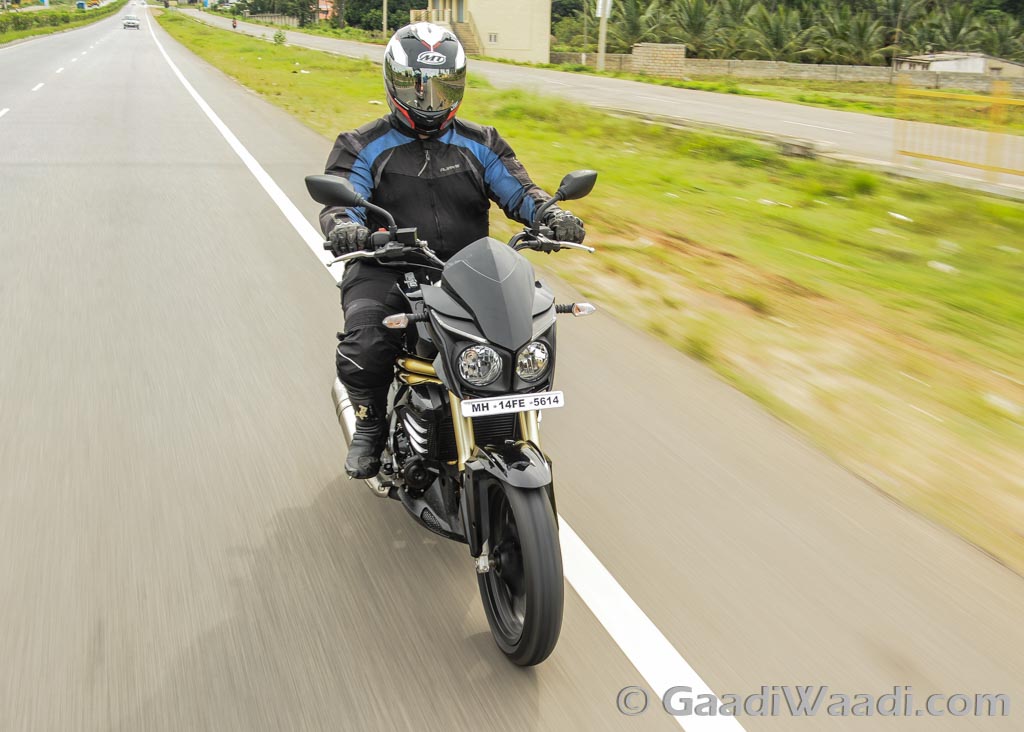 A shorter overdrive gears makes things easier on the highway. Overdrive gear works best from 100 km/hour after which it pulls very strongly till 130 km/h. It can cruise all day at 120 km/HR with no problems whatsoever.

The torque is so much between these speeds you end up looking for higher gears. We saw a top-speed of 147 km/h and Mahindra says it can reach 155 km/h as well. We encountered high velocity crosswinds, which didn’t help us achieve that mark.

Overall, driveability in highway or city is brilliant and with a fuel efficiency of 28 km/l in a new engine over 500 km plus of abuse is commendable and expect it to increase slightly. 21 litre of fuel tank can actually give you 500 kms. 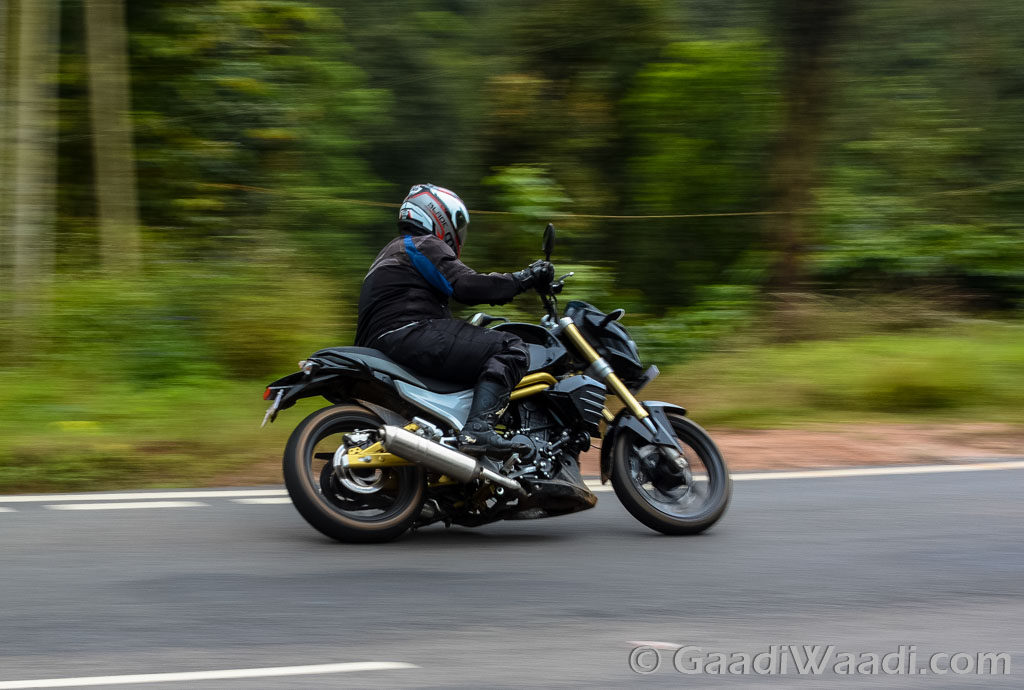 The Mahindra Mojo comes with a twin-tube framed and monoshock suspension at the rear and USD front forks. Mahindra says the chassis-suspension combination is quite unique. The monoshock has been mounted at 25 degrees and is gas and oil charged.

There are separate piston for oil and gas to make sure the bike is balanced properly at that particular angle. Ride quality is excellent despite the underlying stiffness which is present at the time. Take speed breakers at 80 km/hr or go flat out on rough roads, the composure is superlative without being harsh. 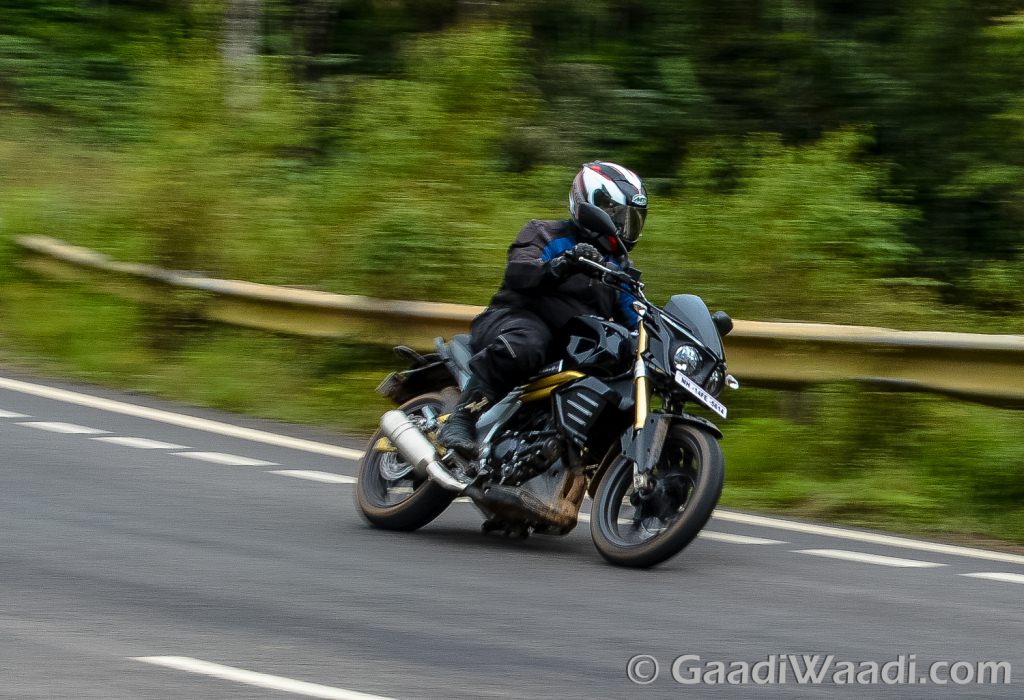 Front-end geometry is raked out and stands at 27 degrees. This makes changing lanes at high-speeds confidence inspiring and stable. Something that the bike is made to do all day. However, we think the rake could have been a bit lower as taking corners isn’t that fun and quick with this angle.

Front-end also shows a tendency to be lighter than expected and it also weaves around to the left a bit, but very slightly, something that is apparent the moment you sit on the bike and navigate through town. Mahindra also says that the bike has a triple clamp, which is unseen in this category of bikes. 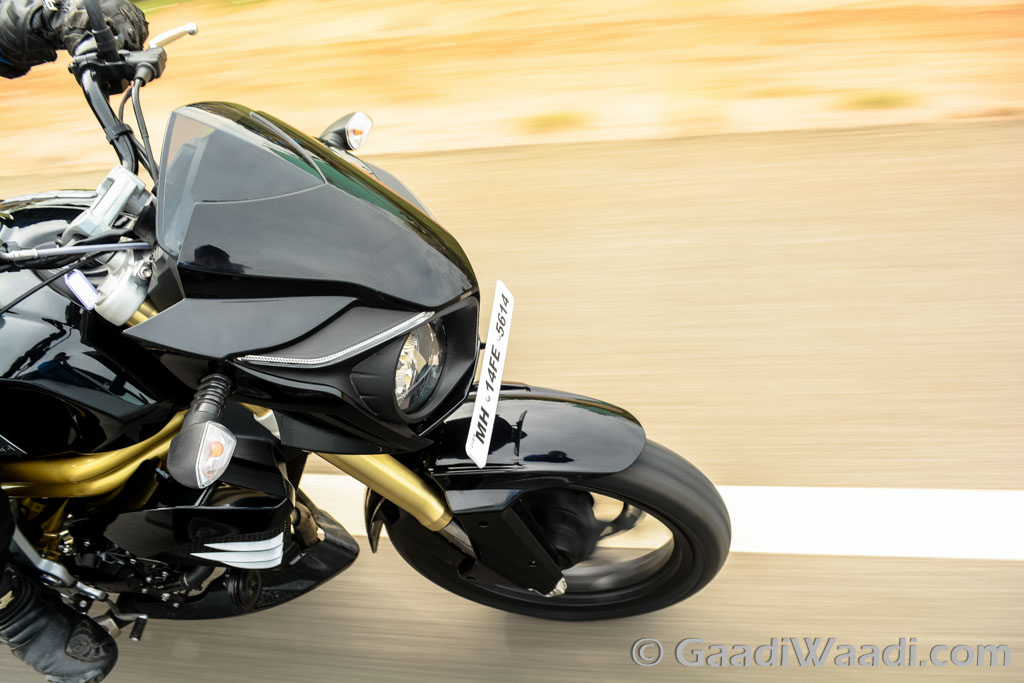 Corner the Mojo hard and you notice there is superlative grip from Pirelli Diablo Roso II tires and the chassis is very composed. Damping is spot on and forces you to go faster and faster. In that process, the faster you go, you run out of cornering clearance and in true cruiser fashion you start scraping the pegs. 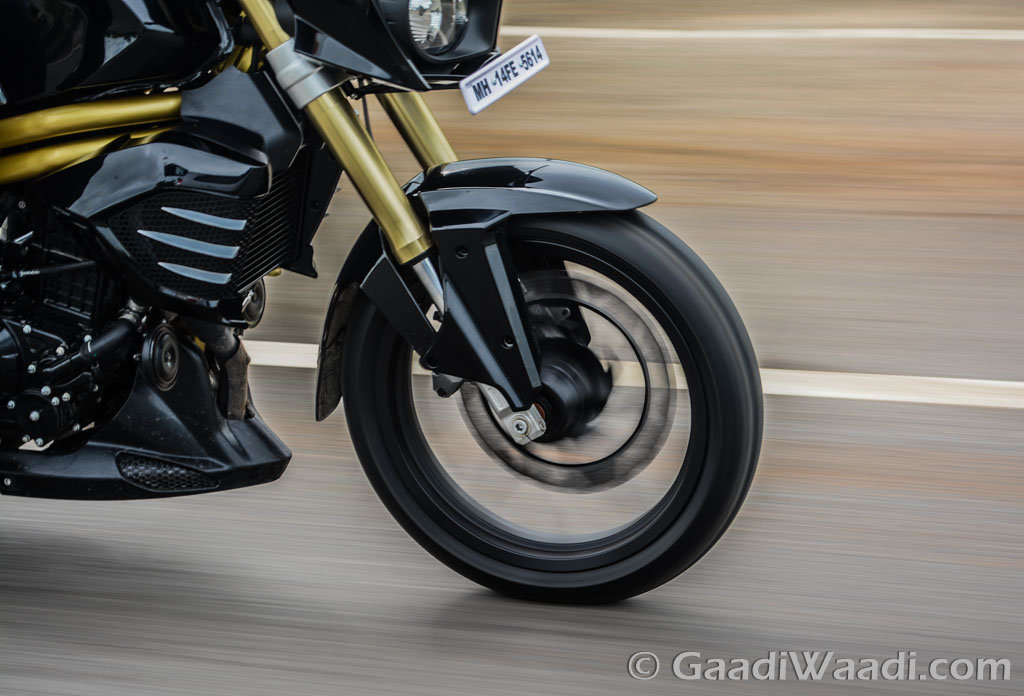 Brake are not the usual Brembo or Bybre units, Mahindra has gone to long lengths of finding a brake making specialist Jjuan who makes racing brakes for the company. The pads that the company has used is sintered to make both things last longer while providing linear and powerful braking. Mahindra says ABS will make it soon to the bike. 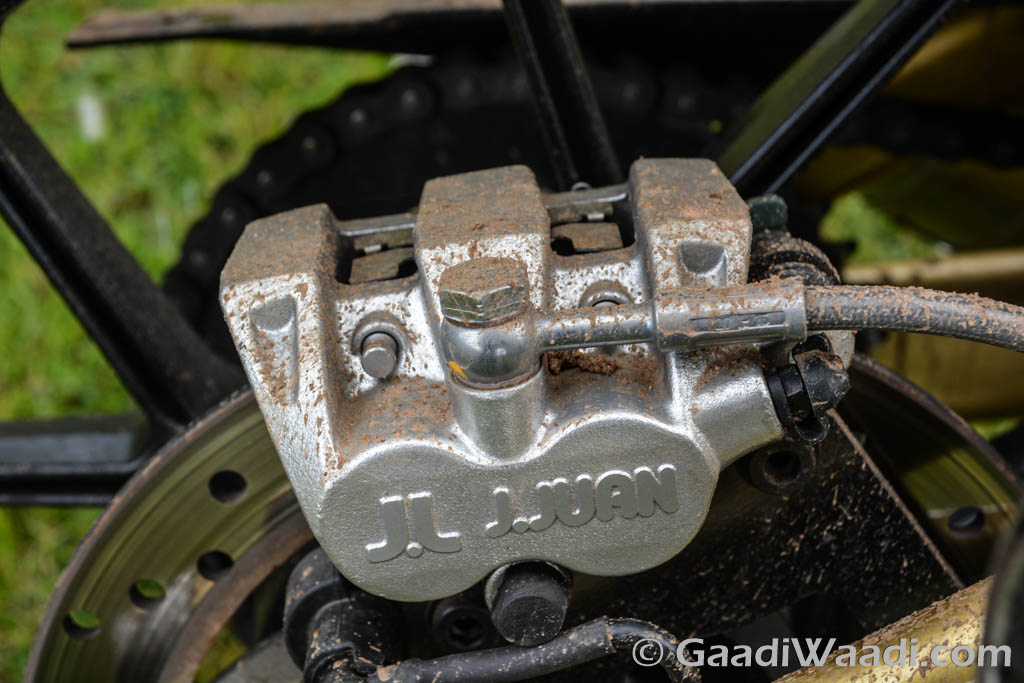 Two at the rear and four pot radial on the front makes braking super impressive on the motorcycle and sometimes feels the brakes and even the tires of these bikes are an overkill, but this makes sure that the bike performs and is safe enough for any kind of rider.

Overall, a stable bike in the corners and stability is top-notch, even at top-speed is the bonus point of this cruiser motorcycle. 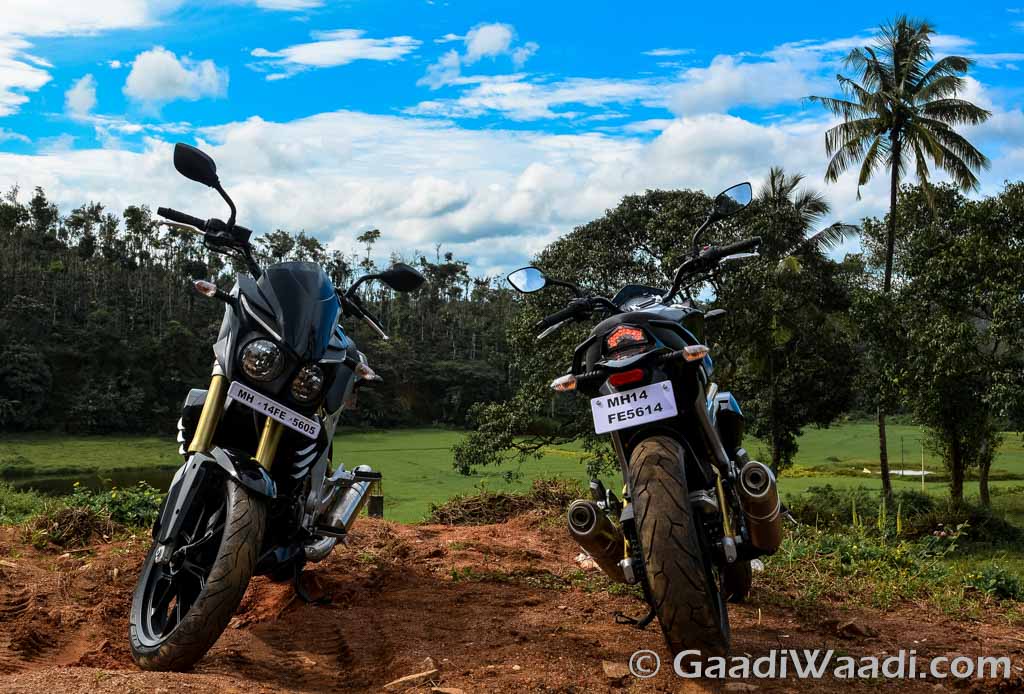 Well, after spending a lot of time and for the first time, a road test done within three days, it’s easy to say that the Mojo is clearly a winner for the company. There is very little to fault with the bike as it offers comfort, power, features, hardware and most importantly, it turns out to be a complete package. Out and out sporty performance is not its forte, but it does the duties it has been assigned to do so and that is munch miles like no other. 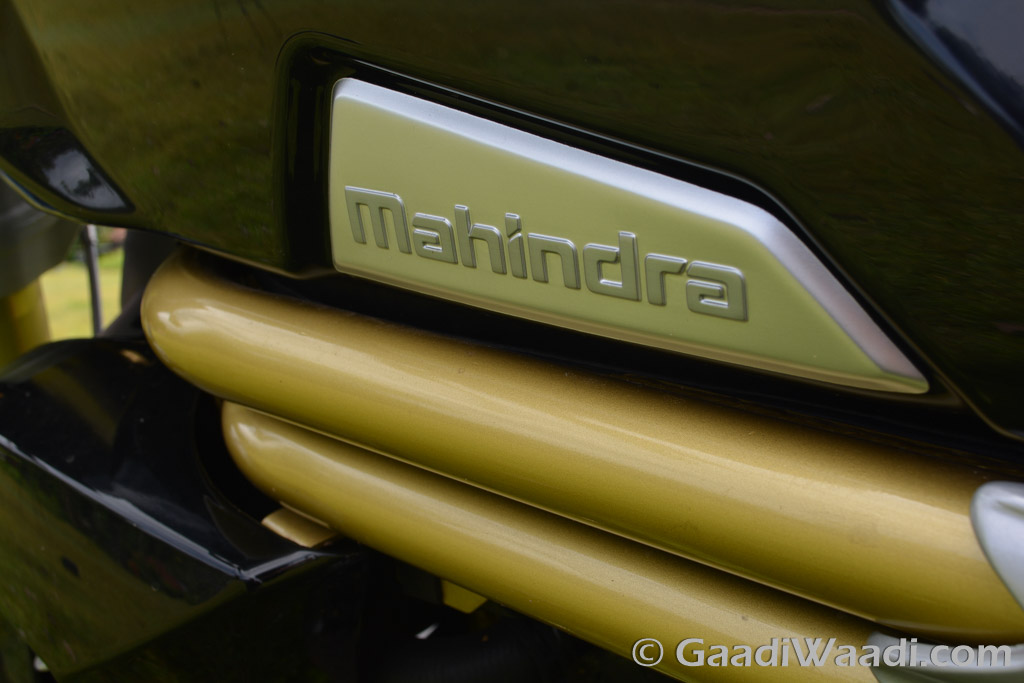 The pricing is said to be slightly higher than expected, but Mahindra says the first set of buyers will get discounts, trips and riding gear, all together as a token of appreciation or count it as a discount. Mojo is proper cruiser motorcycle the masses always need. It’s a growing trend in the country, which should help the company sell a lot of it.

The competition, which is here for ages has been overpriced and overhyped. Sure, there are improvements to be made, but it should follow over time as Mahindra strongly believes in customer feedback, but as of now Mojo is the new Mojo Jojo of the town! 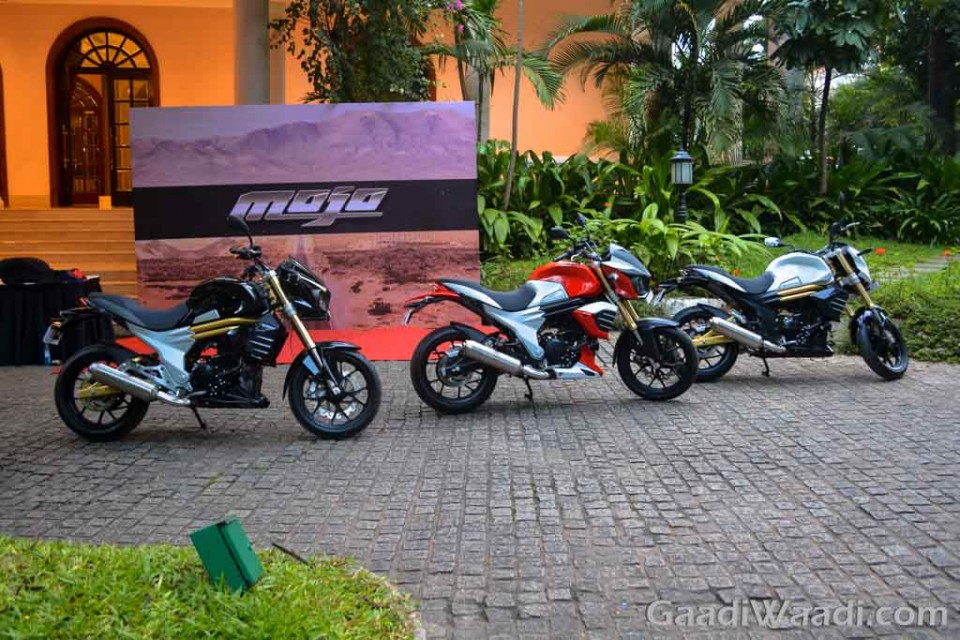 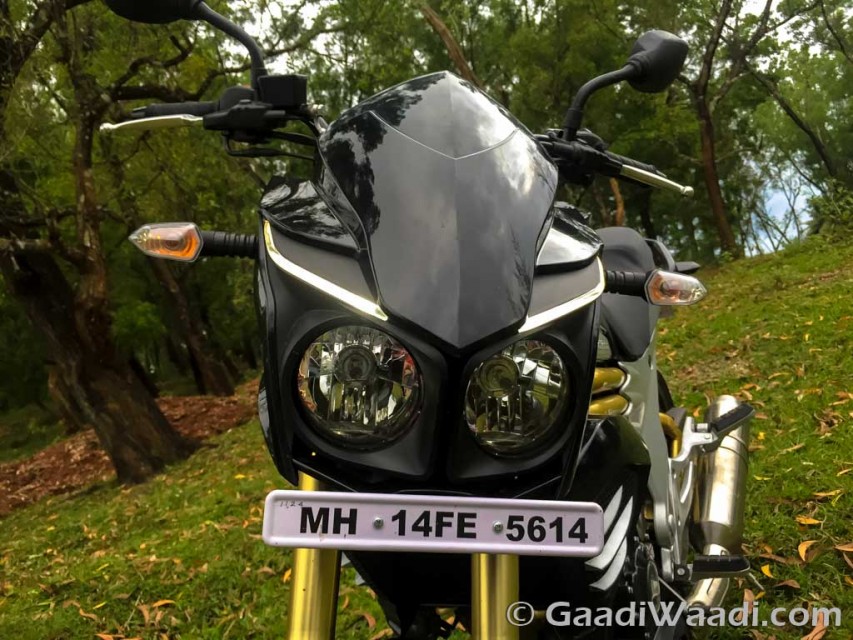